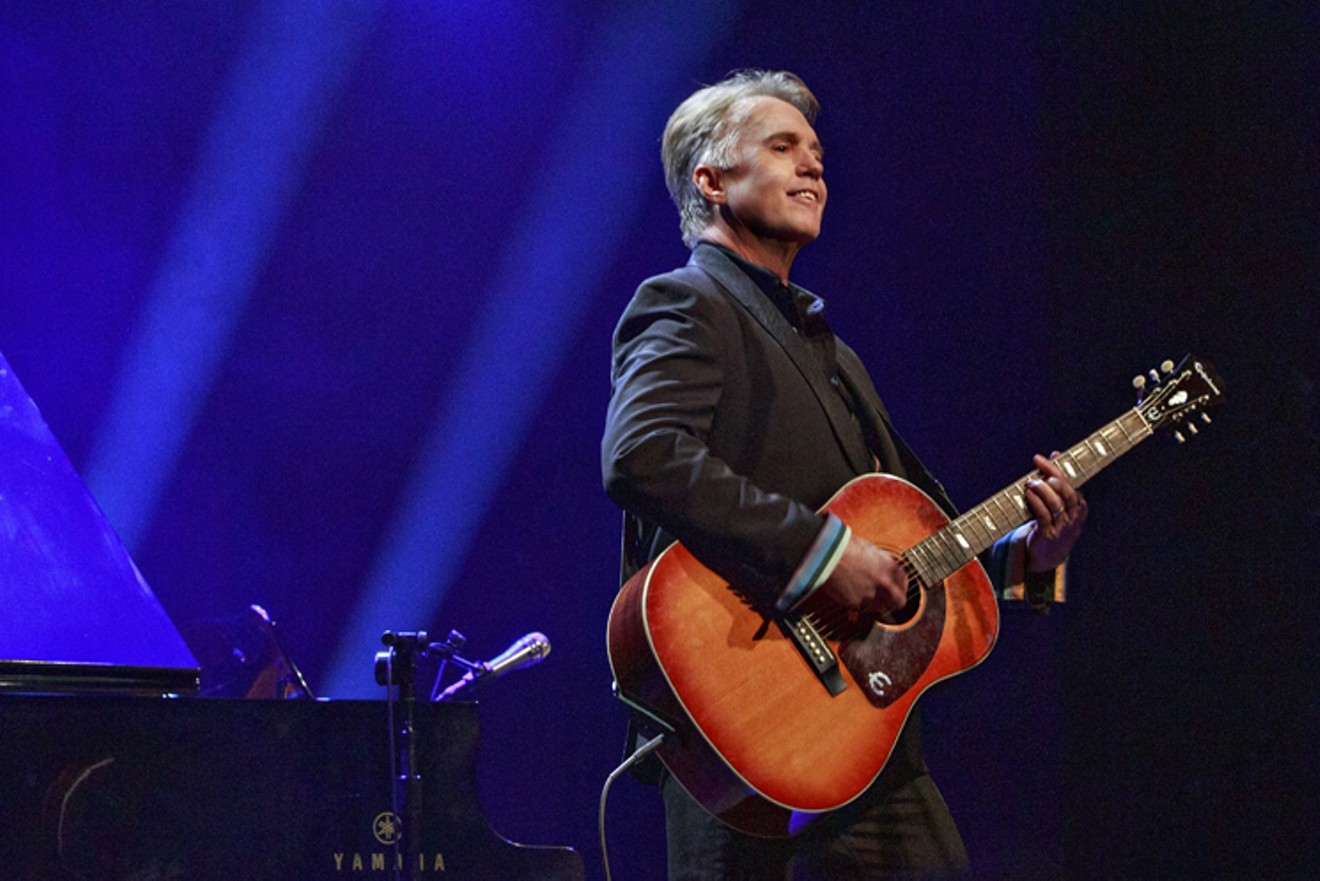 Shaun Cassidy's "The Magic of a Midnight Sky" show is part concert, part theater as he looks back on his life. Photo Used with Permission/Day After Day Productions
Even though it was quite a while ago, Shaun Cassidy certainly remembers the last time he played Houston. It was in early 1980 at a now-defunct little venue called the Astrodome, as part of the Houston Livestock Show and Rodeo. What he didn’t know at the time is that it would also be his last live gig for a long time. A very long time. 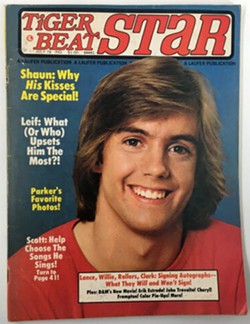 Shaun Cassidy was a frequent 1970s cover boy.
Magazine cover
“It was amazing, just huge. I think that was the biggest place I ever played. The rodeo was there so it was ‘We’re moving the pigs off and moving on the entertainment!’ And I think I drove around in a convertible before I got onstage. It was a lot of fun.”

Shaun Cassidy walked away from that mass adulation and—unlike a lot of his contemporaries—stayed level-headed and pivoted into successful careers as an actor, then director, writer and producer. He’s currently a writer and executive producer on the NBC medical drama New Amsterdam.

“It was a detour from music of my own choosing,” he says. “I’ve had an interesting trajectory as an artist, and I’m grateful for it.”

But he’s returned to music—after those nearly four decades away—with a show that’s part concert and part theater production. In “The Magic of a Midnight Sky,” he plays his music and cover tunes, both solo and with a band, interspersing stories of his life and career. He’ll be in the Houston area at the Dosey Doe on June 8.

By the time of that Astrodome show, Shaun Cassidy was at the tail-end of his phase as one of the biggest teen idols of the 1970s. He moved sizable amounts of vinyl with albums and hits like “Da Doo Ron Ron,” “Hey Deanie,” “That’s Rock ‘n Roll,” “Do You Believe in Magic?” and appeared on hundreds of magazine covers—either for his music or co-starring role on TV as one half of the mystery-solving Hardy Boys.

The then-teenager’s buoyant and infectious cover of the Crystals’ 1963 song “Da Do Ron Ron” hit No. 1 on the Billboard singles charts in July 1977. It was even his pick to cover. “We could all use some fun, especially now, and ‘Da Doo Ron Ron’ is nothing if not fun. And it’s stayed in people’s hearts,” he says.
“My experience as a teen in early ‘20s was shared by a lot of people. So many people tell me even today that that single or my album was the first they bought. Or I was the first concert they went to. We all move along with our lives, but those memories and feelings don’t go away. I take that context and put it into something that contemporary and relevant to all of us now with this show.”

In fact, debut LP Shaun Cassidy was, culled together from previously-released singles outside the U.S. and some new material to capitalize on his Hardy Boys success (the show was only his second acting audition ever).

It was near the top of the LP charts when Elvis Presley died. Cassidy recalls getting a lot of phone calls from reporters asking for his take. But he saw something a bit more ominous than just a quick question and sound bite.
“Inside, I was thinking if this is the road these reporters think I’m on, I don’t want to be on it because I don’t want to be dead at 42. And I wanted to move forward and try new things and take risks,” he recalls.

“My early success is unique. It’s sort of a big first act! And a lot of people don’t survive that. I did, and it’s part of my story,” Cassidy continues. “This show is an objective look as a man at that kid. And the show is really a love letter to the audience. And a thank you note to the kid who managed to get through it.”

One person who managed to have troubles getting through it was his elder half-brother, David Cassidy. He trod almost the same path as a teen idol on TV (The Partridge Family) and records (“I Think I Love You”). He had many ups and downs over the years and died in 2017 due to reasons related to his heavy drinking.
Shaun remembers David in the show, and says he took a lot away from what he went through.

“The idea of being famous at a young age was not unique in my family, it was the norm!” he says. “My father [Jack Cassidy] had been a matinee idol and on Broadway at 18, my mother [Shirley Jones] was a movie star at 18 and won an Academy Award at 24. Then David was a teenager when he got on The Partridge Family. It taught me how short-lived that experience was.”

It also taught him not to have any expectation that that white-hot success could last, and offers that David took a lot of his subsequent roller coaster dips personally. Too personally.

“He wanted to be taken seriously as an artist, but he was on a TV show about a pop band where his mom played the tambourine. No one was going to mistake him for Jimi Hendrix!” he says.
“So why not embrace that and enjoy it and grow afterwards? David tried that and had some success, but it left a chip on his shoulder, and that was sad for me to witness. I said ‘What’s the big deal, dude? You’re beloved by millions of people!’ It's a way of looking at the world. You can either count your blessings or look at the other guy and say, ‘Why can’t I have that?’”

Shaun Cassidy would release a total of five studio albums and write songs for all of them. But he was always more interested in words than music and started acting in theater productions with the true goal of being around playwrights and learn how to craft a story. And for the last three decades has racked up a list of credits, including creating the short-lived TV series American Gothic.

For his work on New Amsterdam, to keep things medically-accurate, Cassidy says that real doctor and nurses are on the production staff to help him mesh facts with drama. He says he’s also close to selling a series pilot that, if accepted, means he’ll be spending June simultaneously touring his current show and putting together a writing staff “while traveling through Iowa in an SUV this June.” 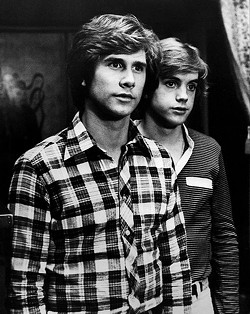 Parker Stevenson and Shaun Cassidy as the Hardy Boys, 1977,
ABC Television, Public domain/Wikimedia Commons
The genesis for “The Magic of a Midnight Sky” began a few years ago.
Cassidy had been approached for years about returning to the road, and more recently about writing a memoir. Then he got the idea that this show could serve both purposes.

“I thought about it for a while, and every time I sat down to write my story, I felt that I wanted more to tell it,” he says. “And this is a way to reconnect to an audience I hadn’t seen in a long time and meet a new one.”

A handful of gigs at a winery near his Santa Barbara house sold out immediately, and as new shows were added, fans flew in from around the world, culminating in a Valentine’s Day 2020 gig for 2,500 people. Then the pandemic hit, and many of those show got cancelled or postponed to the current run of dates.

“Some people have been waiting two years! I’ve never been on tour for a straight month! I mostly did shows on weekends around the Hardy Boys. So, this is completely new for me,” he says. There’s now some talk of a Broadway run.

Oh, and Cassidy is also in the wine business (mostly via his friend, winemaker Steve Clifton). And some proceeds from each bottle of the My First Crush brand go to his favorite charity, No Kid Hungry.

“One in seven kids went to sleep hungry before the pandemic, and after it was one in four. They were getting their main meals at school, and schools were closed,” he says. “I wanted to do something to help.”

Finding more time for more projects, though, might take a miracle of its own—and not the type his doctors and nurses on New Amsterdam perform.

“I’m busier now than I’ve been in my entire life!” he says. “But it doesn’t seem stressful. And I have four kids under the age of 17 at my house. But I’m very grateful for it.”

For more on Shaun Cassidy, visit ShaunCassidy.com
KEEP THE HOUSTON PRESS FREE... Since we started the Houston Press, it has been defined as the free, independent voice of Houston, and we'd like to keep it that way. With local media under siege, it's more important than ever for us to rally support behind funding our local journalism. You can help by participating in our "I Support" program, allowing us to keep offering readers access to our incisive coverage of local news, food and culture with no paywalls.
Make a one-time donation today for as little as $1.