Styx's Ricky Phillips Bottoms Out (on the Bass) for Summer Tour 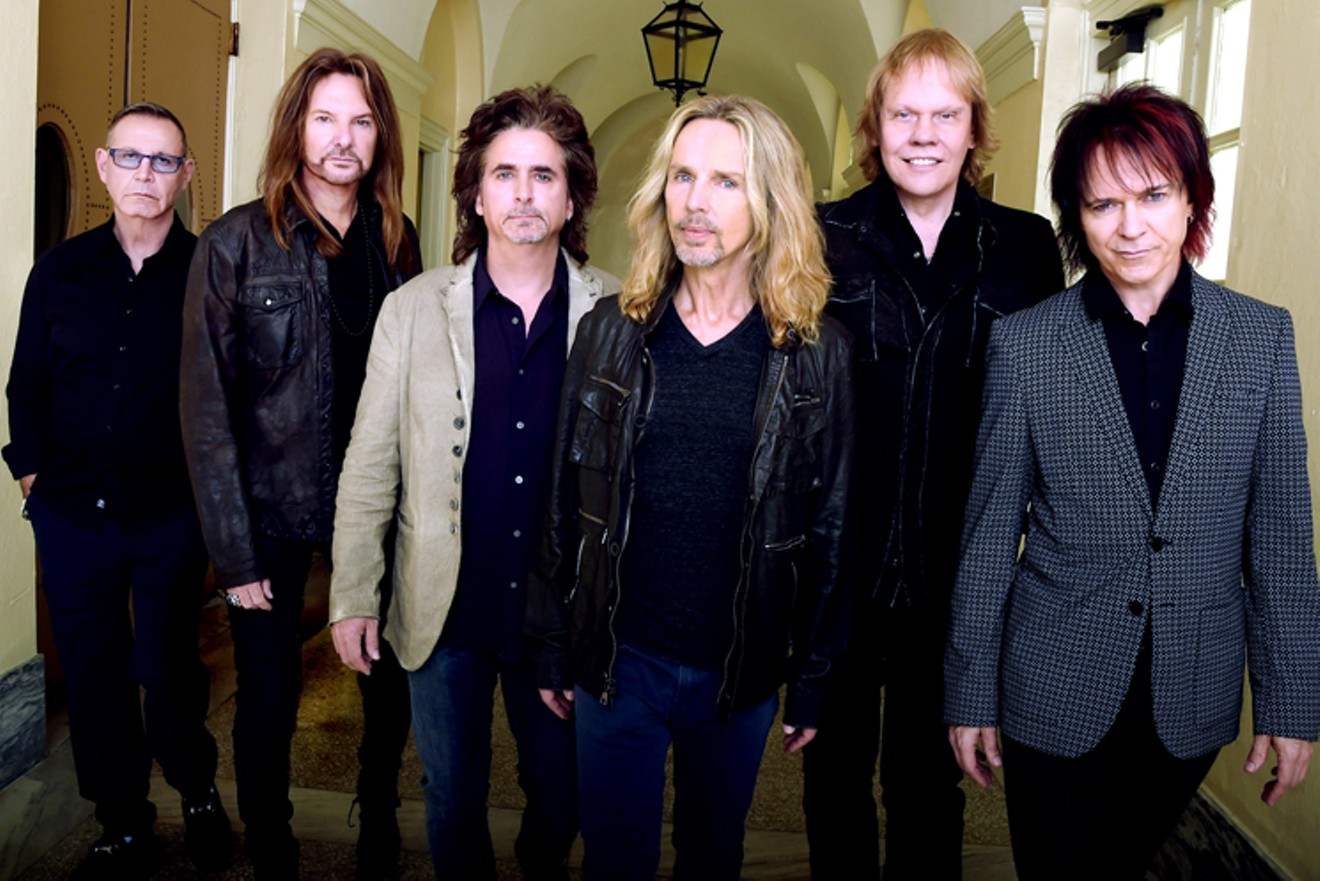 Styx today: Chuck Panozzo, Ricky Phillips, Todd Sucherman, Tommy Shaw, James “JY” Young and Lawrence Gowan. Photo by Rick Diamond
The cell phone sitting on the desk rings at the appointed time, and there’s a high-energy voice on the other end of the line.

Hmmm…it wouldn’t seem that the band whose Classic Rock catalog includes such warhorses as “Come Sail Away,” “Renegade,” “Too Much Time On My Hands,” “Blue Collar Man (Long Nights)” and “Fooling Yourself (The Angry Young Man)” would really need their musical genre. Is there a jazz band called Styx? A hip-hop crew by the same name? A country act named “Sticks?”
It turns out that the modifier is sort of grandiose in-joke among the current lineup, which in addition to bassist Phillips includes founding members James “JY” Young (guitar/vocals) and Chuck Panozzo (bass), classic member Tommy Shaw (vocals/guitar), Lawrence Gowan (vocals/keyboards) and Todd Sucherman (drums).

“It sounds ridiculous, I know,” Phillips laughs. “But we love it!”

No word if the intro will make its way onstage when Styx hits The Woodlands Pavilion on July 24 for a big summer outdoor package tour with REO Speedwagon and Loverboy. Or who will close the show (longtime friends and tourmates, Styx and REO Speedwagon are switching off closing slots). The tour’s umbrella title is “Live and Unzoomed.”

“This summer has already started off with massive crowds. People are ready to get out and see their favorite rock bands play live. We’ve been blessed with the turnout so far,” Phillips says. “And having Loverboy open up has been great. They’re firing on all cylinders and [lead singer] Mike Reno hits all the notes. We even get to play golf together in various cities.”
Phillips says he’s formed a special camaraderie with fellow four-string thumpers Ken “Spider” Sinnaeve (Loverboy) and Bruce Hall (REO Speedwagon). That doesn’t mean that there’s still not a sense of competition among the acts, each one vying for the title of The Best Band of the Day decided upon during thousands of Driving Home Conversations.

“We have a bass [players] hang at band dinners. It’s a traveling circus, I tell you! We see each other more than our own families. But it’s a sense of pride and a sense of ownership to try and be ‘the best.’” Phillips says. “You’ve got to still have that edge, even for [older] acts. I think friendly competition is healthy. But it’s not something we really talk about.”

It's a longstanding joke at contemporary Classic Rock shows that when the vocalist says “And now here’s something from our new album!” that scores of seats become instantly vacant as concertgoers go for bathroom and beer breaks for tunes which most of the general audience will not be familiar with. 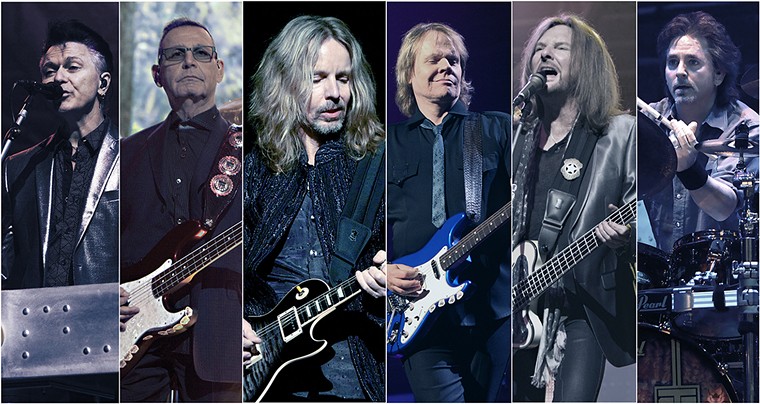 Lawrence Gowan, Chuck Panozzo, Tommy Shaw, James “JY” Young, Ricky Phillips and Todd Sucherman.
Photo by Jason Powell
Of the three “Live and Unzoomed” acts, Styx has put out the most new music in recent years, with full-length albums The Mission (2017), Crash of the Crown and the EP The Same Stardust (both 2021).

Phillips gets it, but says it’s also very important for classic bands to remain vital, creative, and exploratory in creating new music. Or risk becoming a rote oldies act with the same setlist played the same way over and over.

“I think it’s actually frustrating to even go at the pace we’re going. Because in this band we’re all songwriters, but with such different angles. It adds a lot to the stew, but we can only record so many,” he says. “We were really rejuvenated with The Mission, and we wanted a concept and a record we could be proud of.”
Recording for Crash of the Crown in the midst of COVID provided some challenges as members worked on and recorded their parts mostly on their own and then exchanged audio files. For the main part of his contribution, Phillips went in person to Tommy Shaw’s Nashville studio to lay down his initial lines, both men collaborating with producer/songwriter Will Evankovich, who will also add guitars and mandolin during the current tour.

“I put on a face mask AND a shield and we had a temperature gun that took it every day we walked in for four days. And it went smoothly,” he says.

“And then when we do all get together, we work on it, just chipping away to make [the songs] better. And no one is shy or afraid to voice their opinion. That comes from years of experience. I mean, everyone thinks their way is the right way, but you can still be open to being corrected and seeing that someone else’s way could [really] be the right way.”
Next year, Ricky Phillips will celebrate 20 years in the Styx lineup. Normally, a lineup change means “the new guy” has the slot all to his own. But Styx has something rare in that while Phillips definitely takes the lion’s share of bass playing both onstage and in the studio, founding bassist Chuck Panozzo also regularly appear at shows as his health permits, usually for the last two or three songs of the evening. He also contributes to the new music.

But what could make for a sticky situation with bruised egos, fight for control and spotlight hogging, Phillips says isn’t even a consideration.

“Chuck and I are very close today,” Phillips says. “It didn’t start off that way because we didn’t know each other very well. I had met Todd and we had done sessions together, and he wanted to be the guy to call me when I was [offered] the job. Chuck was going through some health issues—it’s no secret, it’s in the book he wrote—and he was going through a lot medically. He was always exhausted,” Phillips says (Panozzo is HIV-positive and also suffered from severe anemia).

“And then he’s a cancer survivor on top of that! But now we hang and eat and travel together. It’s at a comfortable place. He’s got a crazy sense of humor like I do, and we get on like a house on fire.”

Phillip’s own bass idols include Paul McCartney, the Who’s John Entwistle, Chris Squire of Yes, and Tim Bogert of Vanilla Fudge and Cactus. The last three are deceased, but Phillips becomes more fan boy than fellow bass player when he talks about how he got a chance to meet and spend some time with all three of them.

“They’re all part of the tapestry of my musical life, and I worship everything they did. If their bass parts weren’t in those songs, those songs wouldn’t be as good as they are. But I know that people don’t generally hear the bass,” he offers. “They don’t understand the support and strength of that foundation of bass and drums. And the dance that happens between all the instruments, so it doesn’t seem cluttered.”

Finally, as he comes upon entering his third decade with Styx, one question has to be raised: What does he know now that he wished he did on Day One with the group?
Phillips goes to a story, recalling being told that he got the gig, but having to keep it secret until he was officially announced.

Phillips remembers going to Tommy Shaw’s 50th birthday party and encountering “every unemployed bassist in town” who started pumping him for information. But he kept mum, even as he was frantically in his studio with a stack of Styx CDs trying to learn the bass parts from decades worth of releases.

“I was trying to bluff my way through it at the party, but I saw the game. And when we finally all did play together, it was beautiful. Thank God!” he says.

“So that’s a long way of saying I wouldn’t want to know anything, because I had to figure it out for myself. I mean, I was afraid of JY at first. He’s a very large, imposing man! A loud man who when he demands something he wants it right now! But I found out that he’s really a pussycat.”

For more on Styx, visit Styxworld.com
KEEP THE HOUSTON PRESS FREE... Since we started the Houston Press, it has been defined as the free, independent voice of Houston, and we'd like to keep it that way. With local media under siege, it's more important than ever for us to rally support behind funding our local journalism. You can help by participating in our "I Support" program, allowing us to keep offering readers access to our incisive coverage of local news, food and culture with no paywalls.
Make a one-time donation today for as little as $1.