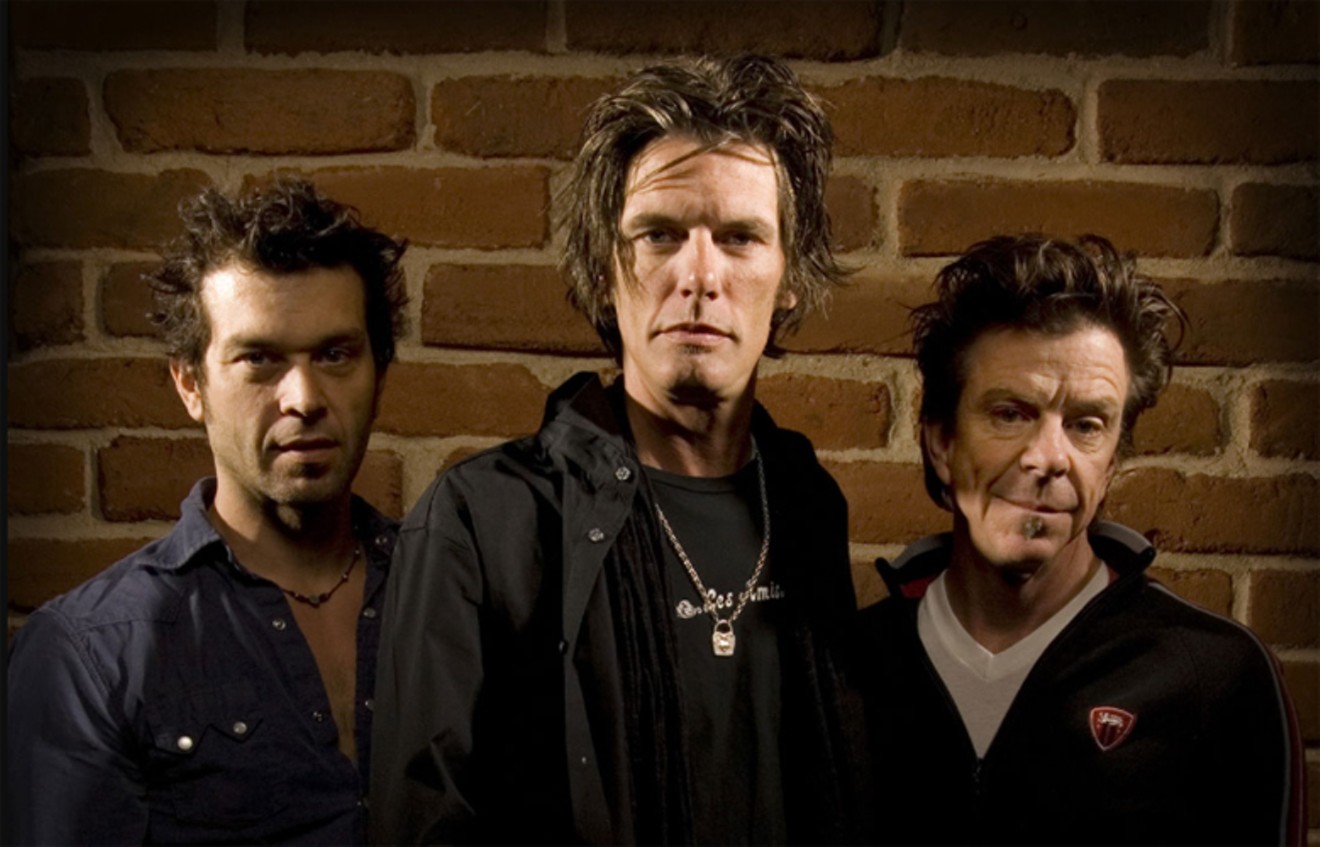 Original members of Austin's Arc Angels: Doyle Bramhall II, Charlie Sexton and Chris Layton Photo provided by the Arc Angels/Used with permission
Of all the gifts that fans of Texas-bred rock and blues could have gotten during the holiday month of December, no one was expecting Saint Nick to bring a reunion announcement for the much-beloved Arc Angels.

The band, which includes original members Doyle Bramhall II and Charlie Sexton (vocals/guitars) and Chris Layton (drums), along with new bassist Eric Holden, will play a series of four Texas dates, including a January 21 stop at the 713 Music Hall in POST Houston.

Layton says he’d been approached by the nonprofit Concerts 4 Austin Charities Music Series co-founder Bill Murray (not the actor) to put together a sort of all-star lineup for the January 24 Austin Cares benefit show.
“I thought, maybe we could start with the Arc Angels, and everybody happened to be available. Then Live Nation heard about it and wanted to do more shows, so that’s how that happened,” Layton says from his car on a video Zoom call with Bramhall and Layton.

“We’d been periodically having shows, but nothing was scheduled. It’s a cool blessing that we have had so much synergy since the beginning,” Sexton adds, before Bramhall cuts in.

“We’re getting together to see if we still have it!” he laughs. “That synergy!” The other concerts will be January 20 in San Antonio and January 22 in Dallas, marking their first public shows since 2009.

Charlie Sexton
Photo by Doug Orama
Holden will be stepping in the very large shoes of the retired Tommy Shannon. He and Layton, of course, are best known as Double Trouble, longtime backing group for the late Stevie Ray Vaughan.

“Eric will be the third person to stand in for Tommy, and they’ve all been highly unique. But no one can ever be as highly unique as Mr. Tommy Shannon!” Sexton says. “He’s great and so funny–even when he doesn’t mean to be.”

“He’s the redwood of the band!” Bramhall offers.
“Well…he was the tallest member,” Layton adds.

The easy camaraderie and humor of the Arc Angels are apparent throughout the interview. At one point, when the older Layton says he’s known the other two for “most of their lives,” Sexton chides him with a quick “Oh, look, he’s playing the age card again!” Bramhall just calls him “Grandpa.”

And when Sexton holds up to his camera an old setlist from the early ‘90s that he recently found, the others smile in wonder. For the record, it featured 11 of the 12 songs on their one and only studio album, along with a cover of the blues standard “Dimples.”

But even though the band hasn’t played together regularly or at all in years, their shared musical history blows away any cobwebs.

“We get together and do the songs and it automatically flows, like no time has passed. We rehearse, but we don’t have to. We just drop right in it, and that’s pretty cool,” Bramhall says.
“This band doesn’t really struggle, we just get together and play,” Layton adds. “There might be some slight interpretations that are different, but not much.”

Like another Fantastic Four, this quartet has an origin story (though it doesn’t involve cosmic rays or combustible teenagers). It begins in the early '90s at the Austin Rehearsal Center (ARC), which gave the band its name.

Sexton—who came briefly to national consciousness with his 1985 debut Pictures for Pleasure and Top 20 hit “Beat’s So Lonely”—had a writing room in the complex. Bramhall was also there working on material for a development deal he had with Geffen Records and Layton had a rehearsal space.

Doyle Bramhall II
Photo by Doug Orama
Through shared history and crossing paths the trio—with Shannon joining—began jamming together and doing some live gigs for fun. Hanging over all of course, was the shocking death of friend/bandmate Vaughan in an August 1990 helicopter crash, just moments after leaving a concert at which he and Double Trouble opened for Eric Clapton.

It led to their 1992 debut (and to date, only studio album) Arc Angels, a blistering tour de force of blues rock, social/romantic observation, character studies, and even a cathartic tribute to Stevie Ray. Bramhall and Sexton alternated lead vocals, and it spawned a hit and MTV video with “Living in a Dream." The band also appeared twice on The Late Show with David Letterman.

But it wasn’t meant to last. Familiar pressures of constant touring and creative differences along with Bramhall’s admitted heavy drug addiction, fractured the group. By October 1994, they were playing their farewell gigs in Austin.

The quartet would occasionally reunite for gigs and short tours, including a May 1999 stop at Houston’s then-named Aerial Theater. A decade after that, the live CD/DVD Living in a Dream was released. A second album was discussed but never came to fruition, and the members went off into other projects.

Both after their initial breakup and in the past decade, all three members have been more than active. Bramhall pursued a solo career and spent time on stage and in the studio with both Roger Waters and Eric Clapton. More recently, he’s collaborated with married couple Susan Tedeschi and Derek Trucks of the Tedeschi Trucks Band.

Record cover
Years ago, Layton had introduced Bramhall to Tedeschi, and the guitarist ended up playing on one of her records. He was amazed by the playing of another guest, Trucks. And when Eric Clapton was looking for a third guitarist who could help him recreate some of the music from the Layla and Other Assorted Love Songs album, Bramhall recommended him. Trucks had also spent years as a member the Allman Brothers Band.

Bramhall and the couple begin to write and play together, with the former now basically an extended member of the group. “They’re really amazing, Susan and Derek,” Bramhall says. “Real salt of the earth people”

Sexton also had a solo career and a long run in Bob Dylan’s band, appearing on records and many years of concerts. He also produced records for Edie Brickell and Lucinda Williams, guested on many releases and occasionally performed with brother Will Sexton.

Oddly, while Dylan is known not to say a word to his audiences, for a good chunk of Sexton’s time with the group, the Bard of Hibbing also didn’t even introduce the band at show’s end. It didn’t really bother Sexton, who says Dylan would not isolate himself from the group offstage.

Chris "Whipper" Layton
Photo by Doug Orama
Finally, Layton (aka “Whipper”), remained a popular go-to studio drummer, and were in the cult favorite bands Storyville and Grady. In 2015, Stevie Ray Vaughan and Double Trouble were inducted into the Rock and Roll Hall of Fame, and Layton accepted his trophy alongside Vaughan’s brother Jimmie, Shannon and keyboardist Reese Wynans.

Layton has mixed memories about the evening, but is proud of his and his bandmates’ achievement.

“I would say the actual performance was pretty exhilarating. And the speech. But these things are always in a different context without having Stevie there,” he says.

But one of his most cherished Rock Hall-related memories had nothing to do with the ceremony itself.

“I had just flown in from Amsterdam where I was on tour and jet-lagged. So I went to lobby and ran into [fellow inductee soul singer] Bill Withers!” Layton laughs. “He was in his pajamas, and we chatted for a while. He said, ‘I guess you can’t sleep either!’ And that was a great experience.”

As for Houston, Sexton says he has a particular fondness for the city and will be happy to return. “Houston is where we worked things out in the beginning,” he says. “We probably played more there than anywhere. At Pat and Pete’s Bon Ton Room. We almost had a residency!” The band also gigged regularly at Club Hey Hey, and did several KLOL Radio benefit shows at the Summit.
Finally, when asked if these four Texas shows might lead to something more—even that long-awaited second studio album—the members seem open to anything.

“We always have fun when we get some time together, and something usually comes from it, whether it’s a good laugh or a completed song,” Sexton says. Layton adds “You never know what might happen with the Arc Angels.”

“Let’s start with these shows,” Bramhall offers as a final note, before slipping in an exaggerated, TV pitchman accent. “Let’s see where we’re at!”

The Arc Angels play 8 p.m. on Friday, January 21, at 713 Music Hall at POST Houston, 401 Franklin, Suite 1600. The Texas Gentlemen open. For information and to see COVID protocols (proof of vaccination or a negative COVID test is required), visit 713MusicHall.com. $35 and up.
KEEP THE HOUSTON PRESS FREE... Since we started the Houston Press, it has been defined as the free, independent voice of Houston, and we'd like to keep it that way. With local media under siege, it's more important than ever for us to rally support behind funding our local journalism. You can help by participating in our "I Support" program, allowing us to keep offering readers access to our incisive coverage of local news, food and culture with no paywalls.
Make a one-time donation today for as little as $1.