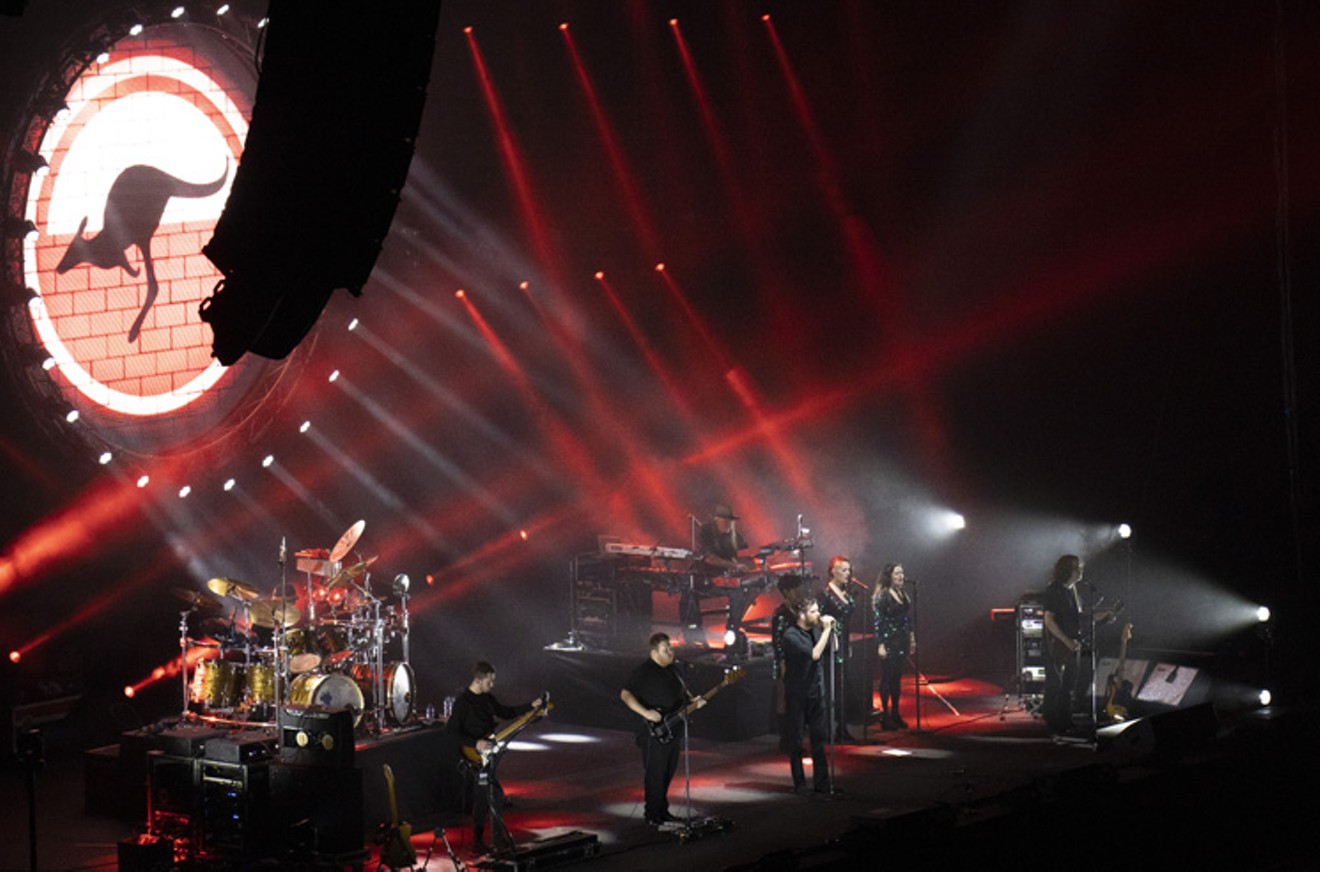 The Australian Pink Floyd Show is a full-fledged musical and visual tribute to the original band. With a kangaroo or two thrown in for good measure. Photo by Mark Gibson
Chris Barnes vividly recalls the first time he was exposed to the music of Pink Floyd. The UK native was about six years old when a cousin who had been living with his family left his record collection in the hands of Chris and his older brother. Among the discs was Relics, a compilation of the band’s early material. 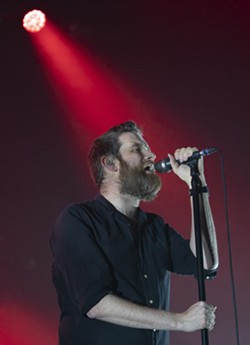 “We used to listen to ‘Arnold Layne.’ And then for ‘Interstellar Overdrive’ he’d turn out the lights and scare me!” Barnes says. “I was actually terrified with all those loud noises!”

It was an inauspicious start between Boy and Band, but as the years went by he grew to become a “massive” Pink Floyd fan. Little could he predict that one day he’d be the lead vocalist—channeling both David Gilmour and Roger Waters—for the tribute band The Australian Pink Floyd Show.

Arguably the best of the group’s “tribute acts” out there on the road, the band will bring their music, lasers, lights, special effects and inflatables (including—yes—a pumped-up kangaroo in place of Floyd’s signature pig) to The Woodlands Pavilion on Saturday, August 27. And while they’ve played Houston many times over the years, this will be their first outdoor show. So, will they prepare any differently?

“Not so much the band. I think it affects the crew with weather and daylight to get the full effects of the production. Hopefully, it won’t rain!” Barnes says via Zoom from a stop on the current 50-date U.S. tour. “I know you’ve had some crazy weather in Texas recently! I mean, I live in the north of England, so we’re used to a lot of rain.”

Barnes says he’s been in the band “about seven years,” but was aware of them and had actually attended shows long before he joined. This included on his first-ever date with his now wife.
“She is a massive Floyd fan. Her dad had seen them as far back as 1970 when they did Atom Heart Mother,” Barnes recalls. “I found out about [the band] through her brother. Then we started to see each other and I said, ‘Let’s go see this gig.’ There were about 1,000 people and the show was amazing—but I had to remember that I was on a date! I guess it worked. We’re still together 25 years after that!”

Of course, the pandemic forced Aussie Floyd (as their fans call them) off the road for nearly two years. Barnes spent the time with his wife and their newborn fourth child, and the couple is expecting a fifth, set to debut just about the time the group is in Houston.

“Well…you had to find something to do in the evenings during the pandemic!” he laughs about the timing. He recalls having the first gig cancelled in France in the spring of 2020 but assumed it would all be over in a few weeks. It wasn’t.
For the band’s current tour under the “All That’s to Come” banner (a line from the song “Eclipse”), Barnes says he know that there are Floyd warhorses the band “has to play” or there will be “some sort of riot.” That list probably includes “Another Brick in the Wall Pt. 2,” “Comfortably Numb,” “Money,” “Hey You,” “Time,” “Wish You Were Here,” and “Learning to Fly.”

But Barnes says they do shake up the set list for each tour, and this one is no exception.

“We sort of dug deep into the catalog for tracks we haven’t played before, at least since I’ve been in the band. I don’t want to give away any secrets, but there are a few in there people will be surprised with,” he says. “And some things that we haven’t done in a long time. It keeps us on our toes so we’re not playing the same thing year in and year out.”
If he were to have his druthers, Barnes says he’d like to tackle more of the “poppy Syd Barrett stuff” like “Matilda Mother” or “Bike” (off Pink Floyd’s debut The Piper at the Gates of Dawn). Also “Fearless” off Meddle. Though he notes that his all-time favorite Floyd song is “Echoes” off the same album.

And while he doesn’t strive to do exact imitations of the voices of Floyd vocalists David Gilmour and Roger Waters, their tones come naturally. “I’ve just absorbed it singing Pink Floyd songs for so long, even before I was in this band, that it’s in my head,” he says. “I could never do the same with, say, Mick Jagger or Freddie Mercury or Bon Scott.”

As the original and second generation Classic Rock acts are (and with more frequency these days) not touring due to death, retirement, or other issues, there are more and more “tribute” acts filling the void to hear the music performed live instead of spinning the records over and over again.
Some of them—like the Australian Pink Floyd show—have fans wholly on their own. And Pink Floyd themselves seem to be the interest of many of them (including competing act Brit Floyd started by Damian Darlington, a former member of Aussie Floyd).

Barnes feels there is a big difference, though, between his band and the tribute acts for others who, say, cover the Beatles or the Rolling Stones or Queen.

“I think to me, Floyd’s kind of music in its own category. Those others are familiar to the very general public, but Pink Floyd sort of still has that cult aspect to them. It’s a band that people recommend to others and they are converted,” he says.

“Rush has that kind of fanbase, you feel like you’re in a club. Pink Floyd is progressive rock, but it’s not Emerson, Lake and Palmer with a hundred notes a second. And the lyrics are deep and there’s a lot to think about.”
Like Rush, Barnes knows that Floyd fans skew male. But he stills sees both genders—and multiple generations—at their shows.

“Even if you’re not [very familiar] with the music, we’ve also got the lights and the inflatables and you get to see a show. So, the husband brings the wife to see the inflatables,” Barnes says, before realizing how that last part could be interpreted. “Uh, that sounds horrible!”

And he doesn’t see Pink Floyd tribute bands as competition for the real thing, as with Roger Waters, currently criss-crossing many miles on his pandemic-delayed and very politically minded “This is Not a Drill” tour.

“What Roger’s touring is Roger’s show, which he freely admits is not everyone’s cup of tea,” Barnes says. “With us, we’re honoring this music of Pink Floyd and their groundbreaking production technologies with the concert. They were way ahead of the time.”
When asked about Texas, Barnes laughs that when he first joined the band, he was told that it would take three days to drive through the entire state, which he thought was an exaggeration—until he was proven wrong.

After the current U.S. tour, Barnes says he’ll be home for a couple of weeks before embarking on a 32-date UK journey. The Australian Pink Floyd show is also prepping for a 2023 jaunt to celebrate the 50th anniversary of The Dark Side of the Moon. But he’ll attend to some family matters during the short down time.

“I’ll probably just go home and be introduced my fifth child, whether it’s a he or she, and then I’m off again!” he says. “I beat myself up a bit about it, but my [wife and kids] know that this is what I do. I’m literally rubbish at everything else!”

The Australian Pink Floyd Show plays 8 p.m. on Saturday, August 27, at the Woodlands Pavilion, 2005 Lake Robbins. For information, visit WoodlandsCenter.org. $29.50 and up.

For more on the Australian Pink Floyd Show, visit AussieFloyd.com
KEEP THE HOUSTON PRESS FREE... Since we started the Houston Press, it has been defined as the free, independent voice of Houston, and we'd like to keep it that way. With local media under siege, it's more important than ever for us to rally support behind funding our local journalism. You can help by participating in our "I Support" program, allowing us to keep offering readers access to our incisive coverage of local news, food and culture with no paywalls.
Make a one-time donation today for as little as $1.