Todd Rundgren leads his band of merry men on a second Beatles tribute tour. Photo by and © Lynn Goldsmith
Glancing at his jam-packed concert schedule for 2022, it’s easy to assume that Todd Rundgren is looking to make up for stage time lost to the pandemic.

He’s currently opening shows for friend Daryl Hall. Two days after that ends, he’ll embark on the second U.S. leg of a jaunt celebrating the legacy of the Beatles’ pivotal records Rubber Soul and Revolver. Four days after that, he’ll begin another tour with his own band.

Tour advertisement
The mathematically questionable It Was Fifty Years Ago Today: A Tribute to the Beatles stops in Houston at Cullen Performance Hall on May 25. The all-star lineup includes Rundgren, Christopher Cross, Jason Scheff [Chicago], Joey Molland [Badfinger] and Denny Laine [Wings, Moody Blues]. With a backing band, they’ll play tunes from those Beatles records alongside some of their own many hits.

In 2019, Rundgren and many of the same artists on this Beatles tour began a similar (and pandemic-shortened) one to celebrate The Beatles (aka The White Album) record. For Rundgren, it was a no-brainer to do it again.

“There was some discussion of doing Let It Be, but I sort of protested and wanted focus on their best material. And the Beatles’ songwriting peak was at Rubber Soul and Revolver,” Rundgren says via Zoom from somewhere on the road.

“They had mastered the art of writing the perfect single already, and now they were stretching out musically. They were using string quartets and were kings of the world at the time. It was a more fecund period in the life of the Beatles, and we [original fans] were younger and more idealistic and not worried about the band ever breaking up.”

In a separate talk, Joey Molland was glad to get the band back together. “I had a good time on the last tour, so they called me up again and I said yes immediately! We’ve done about 15 shows so far,” he says.

Of all the players on this tour, it’s Molland who had the closest personal and professional relationship to the Beatles. Badfinger was signed to the band’s Apple label. George Harrison served as initial producer of their Straight Up album (ironically, Rundgren finished it) and invited the band to play backing music at The Concert for Bangla Desh. 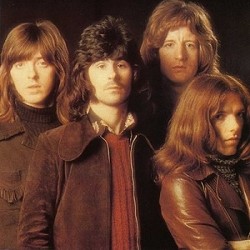 Badfinger (Joey Molland on left).
"Straight Up" record cover
For his part, Rundgren says that the Beatles really made music part of the overall listening experience. Fans would wait for the next record to come out and devour it whole.

“You sort of got it, went into your room, locked the door, and listened to the whole thing. And then do it again. It was as religious experience in a certain sense,” Rundgren says. “But then they stopped performing live, and then they’d be doing things that couldn’t be reproduced live onstage anyway.”

Asked to name a Beatles album off the top of their heads, most people would blurt out Sgt. Pepper’s Lonely Hearts Club Band, Abbey Road, or even Meet the Beatles. But the sometimes-undervalued Rubber Soul and Revolver were pivotal in the band’s artistic progression.

The former saw them move into more adult and introspective lyrics and music (and introduce new and classical instruments), while many hardcore fans considered the latter their best effort and a pivot into more of a pure rock sound.

“I agree that they get lost sometimes. A lot of people will talk about the early days of [Beatlemania] and then just jump right to Sgt. Pepper’s,” Molland says. “The songs are all short, so we try to do as many as possible. I think there’s 35 songs in the show!”

For Jason Scheff, he was eager to repeat the experience from The White Album tour, which he says was ego-free among the marquee classic rock names. “Everybody was just hanging out and there was no pecking order and it was just so much fun,” the singer/bassist says via Zoom from his home.
“I didn’t realize at first how much influence Paul McCartney’s bass has on people like [Elton John bassist] Dee Murray and [original Chicago bassist] Peter Cetera. So lyrical and with great lines. Chicago made no bones about being huge Beatles fans. And the best sources say these two records are the best they ever made. They were the departure from the straight up pop stuff.”

Scheff adds that the divvying up of Beatles songs for that portion of the show didn’t result in any huge disagreements among the players, and he’s happy to be tackling the more John Lennon-created numbers “Girl” and “I’m Only Sleeping.”

He also gets a kick out of his and Rundgren’s simultaneous hair-flipping during Chicago’s “25 or 6 to 4” and has high praise for Rundgren as the de facto leader of the troupe. Rundgren also joins Molland for Badfinger’s “Baby Blue,” which garnered a life of its own after it was used in the last scene in the finale for TV series Breaking Bad.
With four songwriters and singers in the group, you’d think that members of Badfinger would be cutthroat about getting their songs on records. However, Molland says that wasn’t the case at all.

“We only recorded the songs we wanted to that we thought as a group were the best ones. Pete, Tommy, Mike, and I all wrote. And the only cover song we ever did was [the Paul McCartney-written] ‘Come and Get it,’” Molland—who tackles Beatles’ tunes “If I Needed Someone,” “Doctor Robert” and “The Word”—says.

“It was a very relaxed situation. We weren’t desperate to get our own songs on. It wasn’t a competition.”
However, there was one tune on this tour that Rundgren claimed immediately—and there would be no further discussion.

“I got ‘Tomorrow Never Knows,’ right off the bat. No one else could deliver that with the sincerity I could!” Rundgren says. This also coming from a man whose band Utopia (as Classic Rock Brother Jamie pointed out during the talk) put out an entire record that sounds like a lost Beatles effort, Deface the Music.

“Maybe we can do some fake Beatles songs and see if anyone notices!” Rundgren laughs.

Rundgren has met and spent time with all four Beatles, including many years on the road in various lineups of Ringo Starr’s All-Star Band. “I met George first, and I met Paul because I knew Linda Eastman before she knew Paul. I met John during his dark years when Yoko kicked him out of the house, so he probably didn’t remember it!”

For his experience, Molland calls George Harrison an “normal person” who was “very generous with his time.” He remembers getting frequent phone calls, and not always about work. That includes one time when Harrison invited Molland and his wife to join him and his wife Pattie on a sort of double date to see The Band. “It was kind of freaky when he’d just call out of the blue!” Molland laughs.

Amid all the touring, Todd Rundgren’s fans are awaiting the long-awaited release of his guest star-laden Space Force record. Delayed in production because of (no joke) a vinyl shortage on the manufacturing side triggered by the immense demand for the latest Adele LP on the format.
During the pandemic, Rundgren—always at the forefront of technology—launched the “Clearly Human” tour in which he “visited” different cities with site-specific content while actually performing all shows in Chicago that were then livestreamed.

And while his initial ambitions didn’t quite reach fruition (the only local part of the “Houston” show was a few of Rundgren’s shout-outs to the city and a brief stage slideshow of local landmarks), the experience was educational for him.

“It’s hard to sell something when people have no previous experience of it. So, it was a challenge to promote and get people to spend money on something that was not what they really wanted, which was to go to a live show,” he says. “So, I lost a chunk of change on that! But it revealed a lot about audience dynamic and made me think it could still be done even without a pandemic.”

Still, his constant gigging in 2022 has something in spirit with a famous Revolver song—“Taxman.”

“I’m making up for lost time since disease kept us off the road. But that had no effect on my IRS [filing]. So, I need to get back on the road!”

It Was Fifty Years Ago Today: A Tribute to the Beatles is 7 p.m. on Wednesday, May 25, at Cullen Performance Hall, 4300 University. Call 832-842-3131 or visit Uh.edu/cullen-performance-hall/. $49.50-$99.50.
KEEP THE HOUSTON PRESS FREE... Since we started the Houston Press, it has been defined as the free, independent voice of Houston, and we'd like to keep it that way. With local media under siege, it's more important than ever for us to rally support behind funding our local journalism. You can help by participating in our "I Support" program, allowing us to keep offering readers access to our incisive coverage of local news, food and culture with no paywalls.
Make a one-time donation today for as little as $1.