The Box Tops Deliver a Letter to Houston 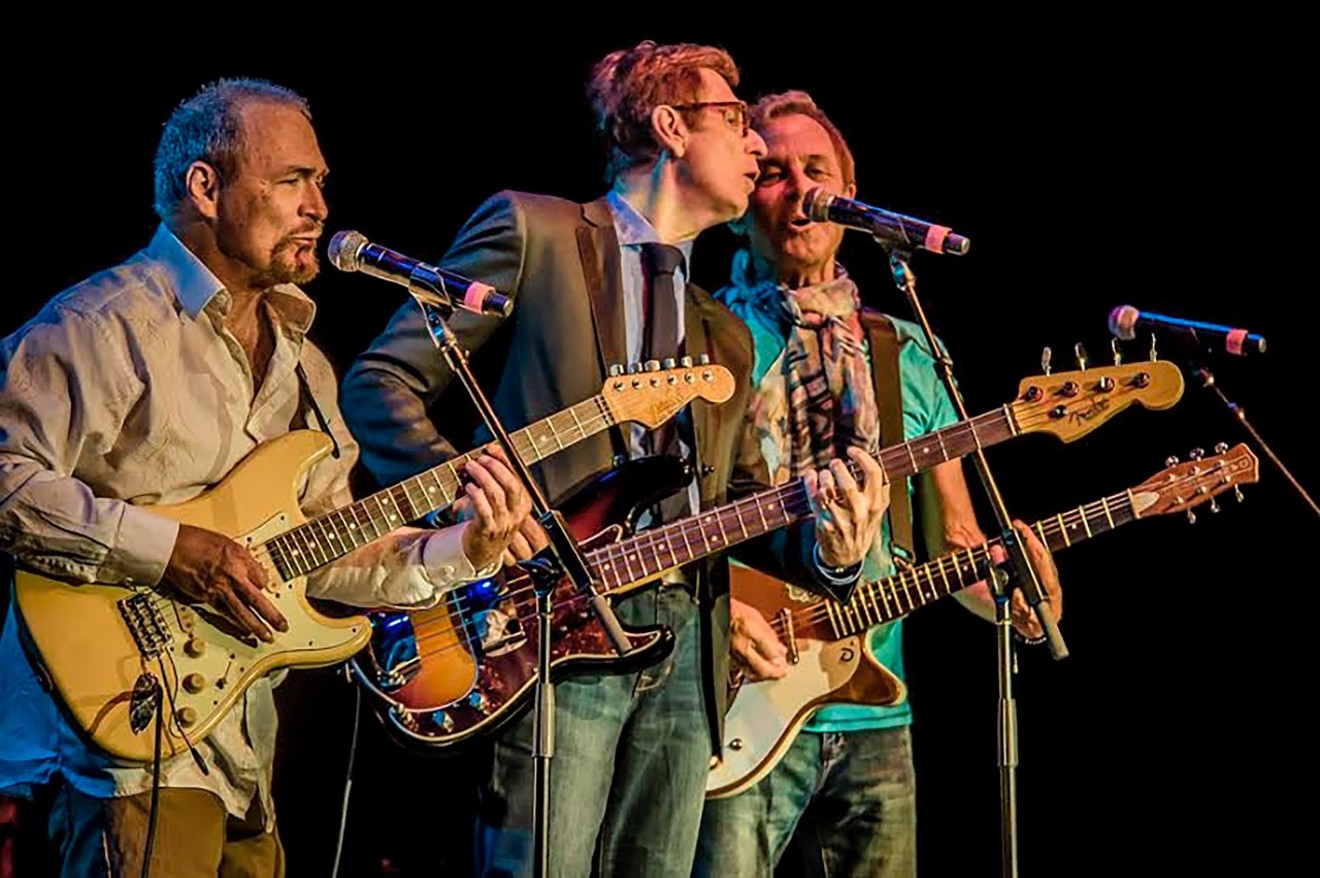 The Box Tops' front line in 2021: Gary Talley, Bill Cunningham, and Rick Levy. Photo provided by the Box Tops/Used with permission
In many rock, blues, and country songs, written letters do not bring good or welcome news to the recipients. They usually carry messages about the death of a loved one, a dumping by a romantic partner, demands for payment or threats of retribution.

But in 1967’s “The Letter” by the Memphis, Tennessee-based Box Tops and written by Wayne Carson, the mailed missive contains some great news for the lovelorn addressee, as related in one of classic rock’s most famous opening stanzas:

Gimme a ticket for an aero-plane/Ain’t got time to take a fast train/Lonely days are gone, I'm a-goin' home/My baby, just a wrote me a letter.

Despite being the band’s first single and clocking in at just under two minutes long, “The Letter” hit #1 on the Billboard charts for the group which included founding members Alex Chilton (lead vocals/rhythm guitar), Gary Talley (lead guitar), John Evans (keyboards), Bill Cunningham (bass) and Danny Smythe (drums).
But for Cunningham, even ascending to that lofty chart height didn’t quell an unease. “I have an interesting memory. I never felt secure as an act when ‘The Letter’ was out, even when it hit #1 and we were out on the road with the big acts,” he says. “Our second single, ‘Neon Rainbow,’ didn’t break into the top 10. It wasn’t until ‘Cry Like a Baby’ came out that we felt more secure we weren’t going to be just a one hit wonder.”

Cunningham notes that “The Letter” also got some unexpected extra play from DJs, as its short running time seemed to perfectly fill up the end of a programming hour when all the music and ads ran out. The song has gone on to be covered by more than 125 artists, the most famous version being Joe Cocker’s, which hit #7 in 1970.

That the deep, gruff voice on the Box Tops’ biggest hit belonged not to a grizzled bluesman like Howlin’ Wolf or Charley Patton, but the 16-year-old white kid Alex Chilton surprised a lot of people. The group epitomized Memphis rock and roll of the ‘60s.
“Memphis was a unique and magical city during that time. There was so much music coming out of there, especially with [labels] Sun and Stax and Hi. Memphis was a rebel city in that it wasn’t controlled by New York or L.A. We were not seen as sophisticated, and that’s what made our music special.” Cunningham says.

“And everybody in town played something, some sort of instrument. I believe it was because we were so isolated. The closest really big cities were 200-250 miles away. There wasn’t a lot of television and there was radio, so our form of entertainment was learning to play music. Even if you were working, you’d come home and play at night.”

The Box Tops would have several more top 40 hits, most notably “Cry Like a Baby” (#2) and “Soul Deep” (#18). Others include “Turn On a Dream,” “Choo Choo Train” (which recently appeared in Quentin Tarantino’s film Once Upon a Time in Hollywood) and “Neon Rainbow” (used on a popular UK TV commercial). But “Sweet Cream Ladies, Forward March,” about the good work done by willing prostitutes, was met with controversy.

“It was on its way up the charts when the music programmers figured out what it was about, and they turned it off!” Cunningham says—though the song’s lyrics are hardly difficult to interpret.
click to enlarge 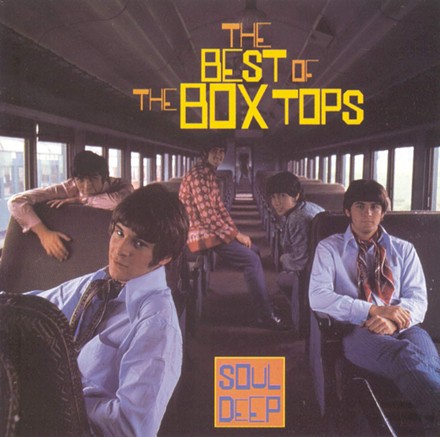 
“But in places like Seattle, it went to #1 locally. You could have regional hits back then. Bands would form their sound playing live and have regional followings before they released a record. Music scenes weren’t like McDonald’s where everything is the same around the country. When you went somewhere, you wanted the local cuisine.”

Groups like the Box Tops, the Beach Boys, the Rascals, Paul Revere and the Raiders and the Lovin’ Spoonful were often portrayed as “America’s answer to the British Invasion.” But that wasn’t the reality, according to Cunningham, simply because the bands were so diverse.

“Everyone gets labeled by critics and reviewers, so we didn’t characterize ourselves. We didn’t know we were ‘blue-eyed soul.’ We originally just wanted to put out a record locally and play more skating rinks or jamborees,” he says.

There were lineup changes, but the Box Tops were closed by 1970. The original quintet reunited in 1996 for several years, and various configurations continued after that. Chilton—who had formed the power pop cult favorite band Big Star and had a solo career—passed in 2010. His memory in particular hangs over the group and its legacy, and he and Cunningham had been friends since the fifth grade.

“Alex deserves everything he gets credit for and probably more. He was a really special person. We played in bands even prior to the Box Tops. And [Big Star guitarist] Chris Bell was one of my best friends,” he says. “Alex got attention because of his voice and when he passed away, we were still playing live [as the Box Tops]. It really destroyed me, and I couldn’t do anything for almost two years.”

It was when when Cunningham was invited to play on a tribute record to record producer Dan Penn (who also worked with Box Tops), that he reconnected with Talley, who had come along the sessions. And they decided to put the Box Tops back together. Cunningham and Talley (both now on vocals, with Talley on lead and sitar) reformed the group in 2015, and today play with Ricky Levy (guitar/vocals), Ron Krasinski (drums) and Mike Stewart (keyboards).

“It just felt right. Everyone was asking us to go out and play those songs. It’s sad not to have the founding members together with us, but they’re all gone,” he reflects.
“But we didn’t get anyone to sound like Alex, we sing them ourselves since we did backing vocals on the original songs. We’re not milking anything. It just brings back so many memories for our [audiences], and we love that. And I hear from a lot from people about what ‘The Letter’ means to them.”

The current lineup of the Box Tops are putting the finishing touches on a live CD, primarily to sell at shows as a souvenir. “We didn’t want to sell a CD with Alex’s voice on it,” Cunningham says. “This is more a memory of the performance that they just saw. I’m doing the mixing, and it sounds really good.”

Finally, after the initial breakup, Cunningham left rock and roll behind to concentrate on classical music (earning a Masters Degree), and played in symphony, ballet and opera orchestras. In the mid-1970’s, he landed a gig with the White House Orchestra playing stand up contrabass and performing at many state dinners, receptions and events until the end of the decade.

His last gig was during the Carter administration, playing with Itzhak Perlman and Pinchas Zukerman to celebrate the signing of the Camp David accord between Egypt and Israel. And then he left music behind for awhile to get an MBA in international business!

But his most memorable White House show was playing a special Bicentennial concert. Cunningham remembers the audience included—in addition to President Gerald Ford, his family and scores of dignitaries and politicians—Queen Elizabeth, Cary Grant, George Harrison and (possibly) Alfred Hitchcock.

“I was looking around and thinking ‘What am I doing up here playing?’” he laughs. “George Harrison should be up here!”

For more on the Box Tops, visit BoxTops.com
KEEP THE HOUSTON PRESS FREE... Since we started the Houston Press, it has been defined as the free, independent voice of Houston, and we'd like to keep it that way. With local media under siege, it's more important than ever for us to rally support behind funding our local journalism. You can help by participating in our "I Support" program, allowing us to keep offering readers access to our incisive coverage of local news, food and culture with no paywalls.
Make a one-time donation today for as little as $1.