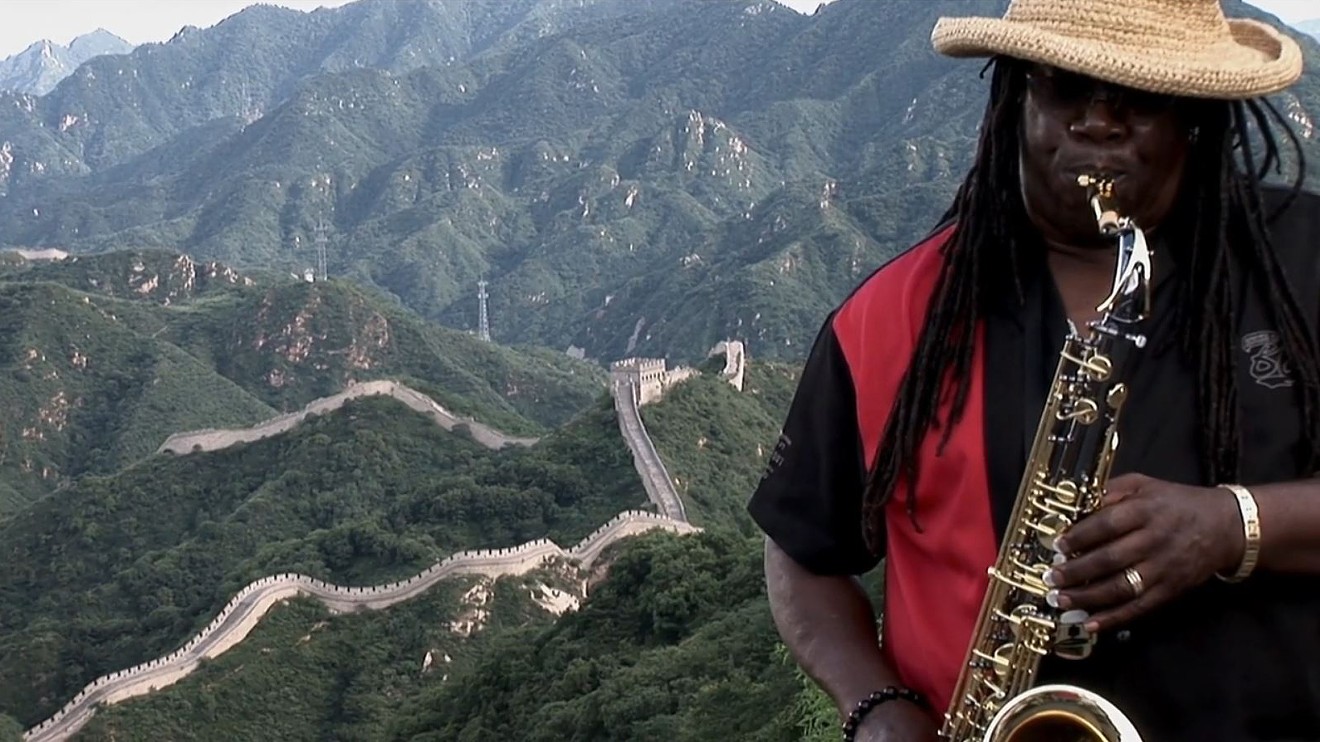 Clarence Clemons on the Great Wall of China in "Who Do I Think I Am?" Screen shot/Virgil Films
After Bruce Springsteen and the E Street Band wrapped up their massive, September 11 memorial-heavy The Rising tour in 2003, sax player Clarence Clemons needed a break. A spiritual seeker – if not a particularly religious one – he decided to book a trip to China, in search of…something.

There, people would only know him as a big man, but not The Big Man. And he brought along director Nick Mead with an eye on making something of an improvised documentary.

But while being filmed with his gleaming instrument on the Great Wall of China—at the time bustling with people—one man took umbrage to Clemons and the film crew impeding his path. “Excuse me!” he says, clearly irritated. “Who do you think you are?”

That simple question set Clemons and the film in a different direction. And that encounter is captured in the culminating work, Clarence Clemons: Who Do I Think I Am? (Virgil Films). Directed by Mead, it is anything but a normal musician documentary. Unfolding at a languid pace (though sometimes too languid), it focuses far more on the inner soul of Clarence Clemons than the outer breath he pushed through his instrument.

Clarence Clemons in the studio.
Screen shot/Virgil Films
“We all know him as the Big Man. But – as Clarence says in the film –people don't really know him. Even Bruce has said that Clarence created this image,” says Joe Amodei, who co-produced the film with Mead and Clemons.

“He was on this quest to find out what life was all about and what his role is here on Earth. As great as being a member of the E Street Band was, Clarence didn’t think that was the only reason he was here. And Nick wanted to pay respect to Clarence the man and the spiritual seeker, rather than just the man blowing the horn.”

Once completed years later, a 55-minute cut was screened at a New Jersey film festival, and in the audience was film producer and Springsteen aficionado Amodei. Later, he spoke with Mead and Clemons about beefing the film up to a 90-minute mark for wider distribution, and the three men agreed to do more filming and get some talking head to discuss Clarence.

But a little over a month later, in June 2011, Clarence Clemons (whose health had been deteriorating over several years) passed away from complications after suffering a stroke.

Left with a subject who was no longer around, Mead and Amodei soon started calling Clemons’ friends and admirers to participate. An eclectic list appear in the film including Joe Walsh (who played with Clemons in Ringo Starr’s All-Star Band), fellow E Streeter Nils Lofgren, nephew Jake Clemons (who took his uncle’s place in the band), and even former U.S. President Bill Clinton, a fellow honker. Relatives, friends, collaborators, and music journalists also got screen time.

“Every single person we talked to loved the guy. And everybody also misses him. And if you’re a Springsteen fan like I am, not matter how great the band is today – and they’re still great – there is that void on the left hand side of the stage,” Amodei says.

There’s much footage of Clemons reflecting on his life, the universe, visiting a temple and strolling around public squares in China, towering over and surrounded by local for whom he was probably the first black man they’ve ever seen in person. There are also smatterings of recording studio sessions and live performance clips (often with Bruce and the band). This leads into a discussion of what makes Clemons unique as a musician.

“Clarence brought an emotion to those solos that Bruce wrote or they collaborated on. The best way to describe it is when Sinatra sings one of the saddest ballads he recorded in the ‘50s. That music isn’t just a bunch of notes – it comes from the heart and the soul,” Amodei says.


“You could always hear that emotion in his solos. It’s described in the film as an ambulance wailing down a city street or a cry from the apartment above. Especially in ‘Jungleland.’ You hear that solo played by others – and Jake comes close – but it’s not the same. You feel that Clarence is living that solo and using his [life experiences] in it…it’s like an out of body experience.”

One obvious and glaring omission from the talking heads, of course, is Bruce Springsteen himself. Amodei says that he and Mead ultimately decided not to “heavily pursue” filming Clemons’ former boss and bandmates lest it become too heavy on that aspect of his life and career. And today Amodei believes they made the right decision—though he notes that Springsteen himself was aware and supportive of the project, and gave permission for music and video rights.

Ultimately, the biggest presence in Who Do I Think I Am? is (not surprisingly) the subject himself, especially in plenty of voice-over narration. Asked if he thinks that Clarence Clemons ever found the peace or answers in his quest that is the heart of the documentary, Amodei is in the affirmative camp.

“I think he did. At least in the film it all came back to the music, his music and the sound that came out of him,” Amodei sums up. “Some of it was Bruce Springsteen songs and some of it was Clarence Clemons songs. But he knew that he was given a gift to get into people’s hearts and sound and made them think or take them away from their day to day problems. I think that’s where he found why he was here.”
KEEP THE HOUSTON PRESS FREE... Since we started the Houston Press, it has been defined as the free, independent voice of Houston, and we'd like to keep it that way. With local media under siege, it's more important than ever for us to rally support behind funding our local journalism. You can help by participating in our "I Support" program, allowing us to keep offering readers access to our incisive coverage of local news, food and culture with no paywalls.
Make a one-time donation today for as little as $1.