The Darkness Bring Salvation with Hard Rock, Sex Robots, and a Clean Shave 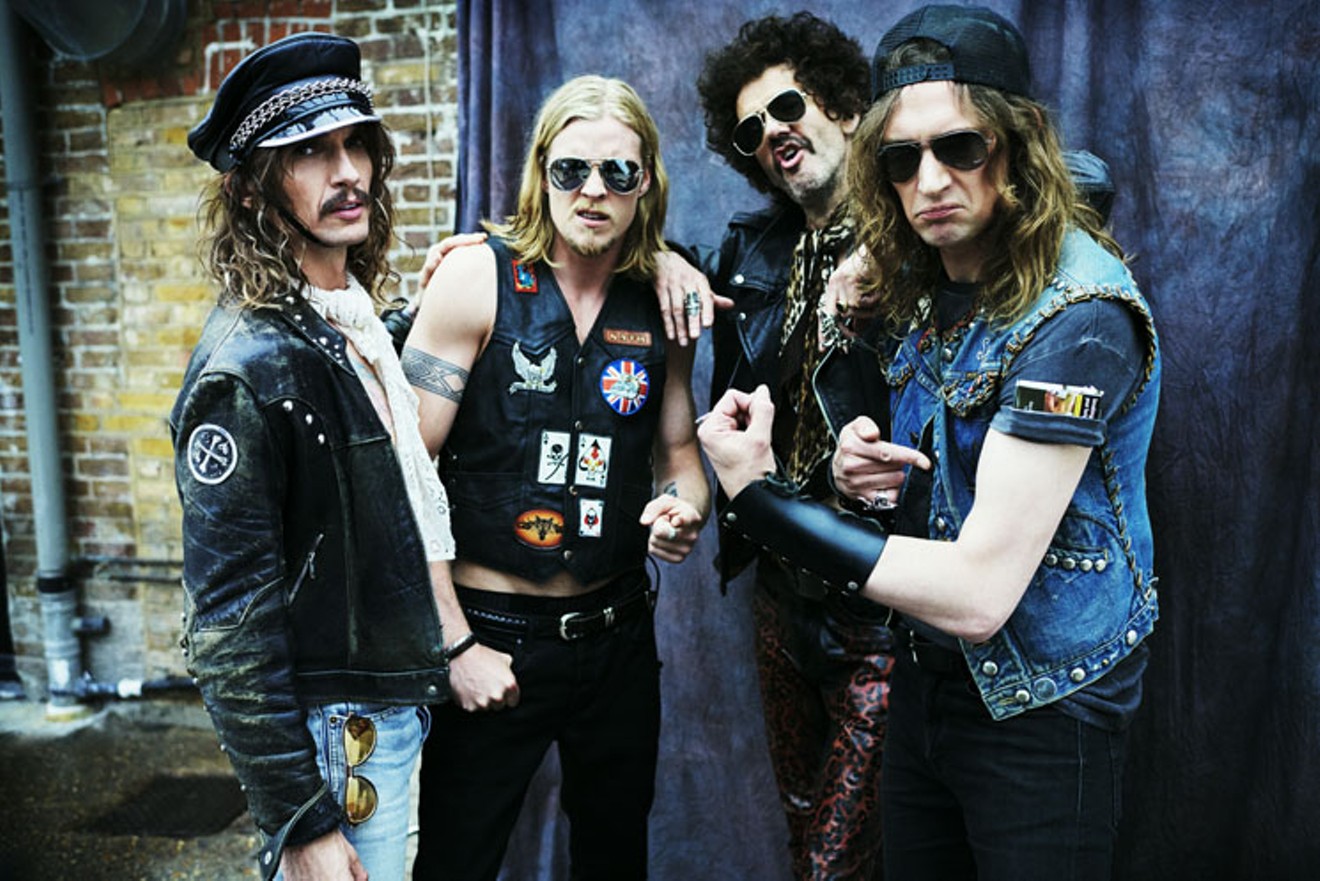 The Darkness may dress like a gang, but they're not! L to R: Justin Hawkins, Rufus "Tiger" Taylor, Frankie Poullain and Dan Hawkins. Photo by Simon Emmett
Though these UK hard rockers are known as The Darkness, right now they’re only seeing White Lightness out the windows of their tour bus. That’s because a blinding snowstorm has been raging for five hours as they motor across Canada. But after some false starts, bassist Frankie Poullain is finally able to connect via Zoom to a computer in Houston.

Record cover
“I’m working with my British 4G phone. When we couldn’t do this originally, I was thinking ‘Houston, we have a problem.’ You’re probably sick of that! But I’m ready to go!” he says onscreen with a choppy video that’s the quality you see when kidnappers are showing off a hostage.

“It’s just a gift from the gods to be able to play at all again, and we appreciate it so much,” he continues. “Sometimes, it feels like the first time, and they’re more smiling faces than ever before. We want [the venues] to turn off the air conditioning so we can feel the heat and the pheromones of the audience!”

When The Darkness burst on the international scene with their 2003 debut Permission to Land and video for hit single “I Believe in a Thing Called Love,” lots of listeners didn’t know what to even make of the band at first.

With their over-the-top somewhat throwback look and music, down-and-dirty vibe in interviews, frenetic live shows and the trademark histrionic falsetto of lead singer Justin Hawkins, people pondered. Were they a satire or parody group? A current band paying tribute to the past? Something in between?

“We’ve never believed in categories or names or titles. Hold on.” Poullain says before moving his British 4G phone to another part of the bus, giving a bit of an unintended tour that catches a headphone-wearing Hawkins popping into the frame. “I can be all things. We’re all tapping into the same reservoir. We all laugh and cry. It’s not about being moody geniuses.”

Well, there’s no doubt that the Darkness have always been a real band. And with that has come real band issues like member departures and returns, breakups, solo and offshoot projects, waxing and waning interest and popularity and even a stint in rehab for Hawkins. But they’ve managed to maintain something refreshing in 2022: a sense of humor about it all.
The Darkness today includes original members Poullain, Justin Hawkins (vocals/guitar/keyboards), and brother Dan Hawkins (guitar and record producer), along with newer member Rufus “Tiger” Taylor (drums). They’re back on the road in support of their seventh studio effort, last year’s Motorheart. That includes a Houston stop April 6 at Warehouse Live.

“The last album before this one, Easter is Cancelled, was quite thoughtful by our standards. And we don’t usually try and be thoughtful. But Justin had to address some things in his life,” Poullain offers. “I think this one is probably the hardest rock record we’ve done so far. Definitely the biggest drum sound, and the riffage really shines on it. Dan gets the chance to explore his enormous lexicon of riffs.” The Darkness are ready to Save America!
Photo by Simon Emmett
The band’s trademark wry lyrical humor is intact. In the record’s opener “Welcome to Glasgae” about a magical geographical place for the group, Hawkins observes “The women are gorgeous/And the food is OK.” On “It’s Love, Jim” (note the Star Trek reference) the narrator welcomes an alien abduction from an interplanetary hottie who plants “a kiss like a tractor beam” (note the Star Wars reference).

That nod to alternative lovestyles continues with the title track, which celebrates the pleasures of the robot sex droid helpfully pictured on the cover. “A touch of a button/A steely caress/You need a Phillips screwdriver/To get her undressed” Hawkins sings.

Which begs the question: If the Darkness could have their own robot sex droid on that tour bus barreling through a Canadian snowstorm to keep them happy and occupied, which celebrity would it resemble most?
“Look, we couldn’t agree upon what type of coffee machine to get on this tour bus. Or toaster. We can’t agree on anything. We’re one of those bands who celebrate our differences. We’re not a gang,” he offers.

“That said, I think we’d go back a bit, be classic. Like make Lauren Bacall the sex robot. Or more Sharon Stone. That would satisfy Rufus with his more modern tastes.” It should be noted that Basic Instinct, in which Stone co-stars, just marked the 30th anniversary of its release.

Motorheart has already given birth to three videos that show off the band’s unvarnished dramatic and action thespian skills. On the old-fashioned cinema-inspired “Jussy’s Girl,” Poullain rides one of those giant-wheeled 19th century bicycles.

“I had a couple of riding sessions. The director of the video actually takes people on guided tours on those bikes!” he says. “So, it was my job to really put my balls on the line.”
For “Nobody Can See Me Cry,” all four members shed tears—though Poullain’s are more internal and less liquidy than his bandmates, especially the seemingly inconsolable Justin Hawkins.

“That video was Justin with his balls on the line. He’s always talked about the day when he’ll strip naked and cry during a show. A ‘get out’ clause if things ever get bad. His crying was the most extreme. Hammy! But Rufus’ crying was the most convincing.”

Shot outdoors, “It’s Love, Jim” takes the title to heart as the band plays on a farm in front of an audience of penned-in cows. Some of whom get rather intimate with their PDAs as the video frames mount.

“It was just a happy coincidence. We just woke up with this English spring sunshine, and they seemed ready,” Poullain says. “We’ve got animals working for us in all the videos. My dog’s in one. And Rufus’ is in another.”
Finally, in the band’s press release announcing the current U.S. tour, Justin Hawkins lays out the band’s motivation for coming to these shores.

“You there, in the Americas—hear me, and hear me well: The Darkness know your pain, know that you have cried yourselves to sleep every night, bereft of quality English rock music. Well, desist from weeping and pull up your fully grown adult pants—salvation is upon you!”

But as that sounds like something like Vladimir Putin might say to the Ukrainians about providing “salvation” in another part of the world. So, the hard, Mike Wallace-style must be asked of the wild-haired-and-moustache-sporting bassist currently riding the roads of Canada: Have The Darkness come to lead American audiences to salvation, or subjugation?

“We’ve coming to shave America. Shave all those beards off the hipsters playing too much bad folk and blues!” Poullain says. “There should be no shaggy beards allowed in rock music anymore! But you can trim to a moustache.”

For more on the Darkness, visit TheDarknessLive.com.
KEEP THE HOUSTON PRESS FREE... Since we started the Houston Press, it has been defined as the free, independent voice of Houston, and we'd like to keep it that way. With local media under siege, it's more important than ever for us to rally support behind funding our local journalism. You can help by participating in our "I Support" program, allowing us to keep offering readers access to our incisive coverage of local news, food and culture with no paywalls.
Make a one-time donation today for as little as $1.