The Magnificent with The Mighty Manfred Bring Texas a "Soul Music Tent Revival!" 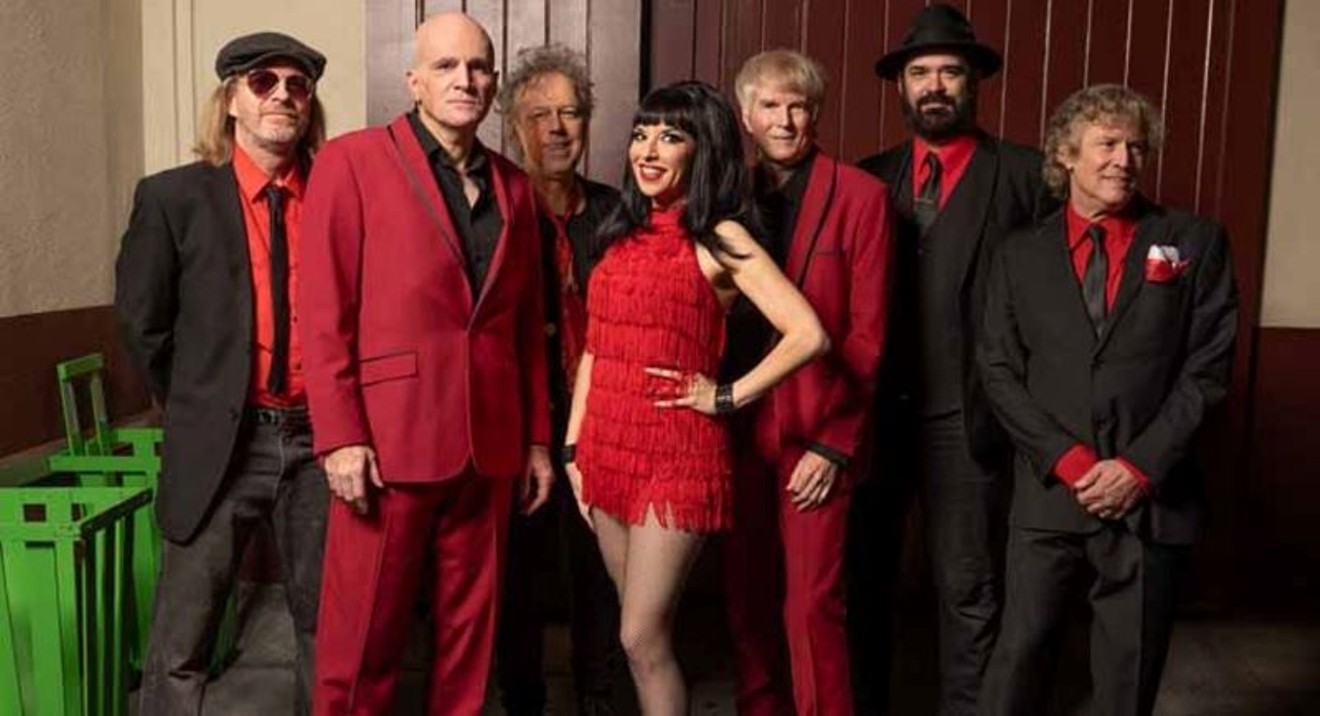 The mainstays of The Magnificent: Erik Szabo, Nathan "The Deacon" Long, Todd Westover Moana Santana, Mighty Manfred, "The Professor of Rock and Soul," Kent Holmes and Bruce Duff. Photo by © Stevo Rood
Often in the music business—just as in “business” business—connections and random encounters can lead to opportunity for bands. That’s what happened to the Magnificent at the Original Farmer’s Market in Los Angeles last November.

Onsite is the Market Tavern, managed by Gary Twinn of the cover band the Long Shadows. Watching the Magnificent play that day was the band’s drummer Clem Burke, whose longtime “real” gig is with Blondie. Accompanying Burke was longtime close friend and Go-Go's bassist Kathy Valentine, visiting from Austin.

Unbeknownst to members of the Magnificent, Valentine filmed part of the show and posted to her Instagram. Seeing those videos was Steve Wertheimer, owner of Austin’s Continental Club and co-owner of the Houston branch, who immediately wanted to book the group.
A few exchanges later with Magnificent co-lead vocalist The Mighty Manfred, and the band will be coming to Texas for a handful of dates, including April 20 at Houston’s Continental Club.

“The band doesn’t really tour. It’s mainly a side project for the members and we don’t get out of the state! So, this is really cool,” Manfred says via Zoom from his home.

The Magnificent formed in 2012, playing strictly covers of classic R&B/soul music of the ‘60s and ‘70s. But you won’t hear well-known oldies fare like “Mustang Sally,” “Hold On, I’m Coming,” or “I Can’t Get Next to You.”

The members here are serious record crate diggers, and the setlist includes tunes originally cut by artists like Johnny Daye (“What’ll I Do for Satisfaction”), Chuck Bridges (“Don’t You Make Me Cry”), The Vel-Vets (“I Gotta Find Me Somebody”) and The Knight Brothers (“Love Can’t You Hear Me”).
Manfred says all the members—which also include co-lead vocalist Nathan “The Deacon” Long, guitarist Kent Holmes, bassist SL “Duck” Duff, keyboardist Erik Szabo and drummer Todd Westover—are involved in choosing material.

“Everybody in the band brings songs to pitch for us to play. Sometimes it just doesn’t work, but sometimes it does!” Manfred says. His bandmates are also in other groups like MI6, the Brutalists, the Streetwalkin’ Cheetahs, the Park Bench Prophets and the Bellrays (though they no longer have a horn section).

The Mighty Manfred himself has fronted the garage rock revivalists the Woggles for more than three decades. Asked why he shares the spotlight with Long in the Magnificent, his answer is honest.
“I didn’t want to work as hard! I do that in the Woggles normally!” he laughs. “I also thought it would be great to have some extra energy. I hope it’s more Sam and Dave than the Blues Brothers, not that there’s anything wrong with them. There’s more dynamism with the two of us. Is that even a word?”

Also onstage are two authentic go-go dancers, Moana Santana and Ruby Champagne of Lucha va Voom. While the band plays, they twist, shimmy, and frug in constant motion. Manfred says it’s all part of the fun.

“We’re talking about a three-ring circus here. The more to distract the audience, the better!” he says. “They hear the music and they’ve got something to watch. Something for the ladies, and something for the men too. And with the ladies moving like that, we’re trying to also get people dancing and into the experience. It’s our Soul Music Tent Revival!”

The Magnificent have also gotten more serious about recording and will have an EP for sale at their Texas shows called Monolithic. It consists of nine covers and one original by Long (“Set Me Free”). 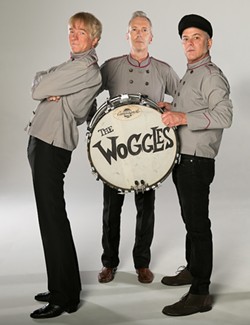 Current Woggles: The Mighty Manfred, Buzz Hagstrom and Dan Elextro.
Photo by the Woggles
The band also plans to include that tune on an all-original concept record about a “lover’s triangle between a preacher, a philanderer and a woman.” Other original tunes include “Love Don’t Come Easy,” “Ask Me How I Knew” and “All Over the World.”

As for his other projects, Manfred says there’s a new Woggles record coming, but not until next year. The band recorded two tracks with musician/producer Steven Van Zandt just before the pandemic and have worked on others.

A digital single (“The Witch”) was released last Halloween, and this August will finally bring an actual 45 of “The Flesh Hammer.” Its tardiness an effect of the worldwide difficulties getting vinyl records actually produced. Fewer pressing plants are already working overtime as the format continues to grow in popularity.

That song is a tribute to longtime Woggles guitarist, Jeff “The Flesh Hammer” Walls, who died in May 2019 while awaiting treatment for a rare form of pulmonary disease. The song was written by Pat Beers, singer/guitarist for garage/fuzz rockers the Schizophonics, who also plays on it.

“Pat is the most dynamic and greatest live guitar player I’ve ever seen in my life!” Manfred says. “He’s chording with his left hand, has a sustain on the guitar, and is doing splits and rolling over on the ground. He’s like James Brown in constant motion from start to finish.”

Other tracks for the upcoming record will find the Woggles tapping a considerable lineup of accomplished guitarists subbing for Walls, including Peter Greenberg (Barrence Whitfield and the Savages), Rick Miller (Southern Culture on the Skids), Greg Cartwright (Reigning Sound), Keith Streng (the Fleshtones) and Graham Day (The Prisoners, Prime Movers). The Woggles even played Day’s wedding some years ago. 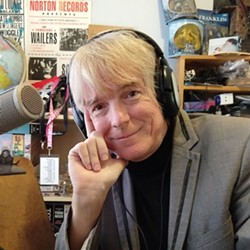 The Mighty Manfred recording his radio show.
Photo by Thea Jones
Manfred has yet another job, as a DJ with a daily show on SiriusXM radio’s Underground Garage channel. It was founded and is still programmed by that multi-hyphenate magnate Steven Van Zandt. Fun fact: Van Zandt has in place a decree that all DJs play at least one Beatles and one Rolling Stones song per hour.

“Steven has a huge playbook to choose from with a lot of range and not just the hits,” Manfred says. He records his intros and outros usually from his home, and if he picks a song that the station doesn’t have, must provide a WAV file to a producer.

As Van Zandt himself told the Houston Press last year, the channel has the most decade-spanning playlist of any, stretching from the pre-rock era to the latest releases.

And as if to prove that, listeners of a recent Mighty Manfred show heard the brand new single from Swedish garage rockers the Hellacopters (“Reap a Hurricane”) followed immediately by a Little Richard track from 1957 (“Miss Ann”).

He says when the Woggles were on the road, he’d sometimes record the show on a laptop in hotel rooms and—one time—from the band’s tour van outside a venue.

“It was outside Maxwell’s in Hoboken, New Jersey. And this guy came up from a dumbwaiter and dropped a whole rack of glasses, which you could hear on the show,” he laughs. “I thought, ‘Hey, that’ made for great radio! It sounds very real!’”

Finally, Manfred remembers one gig in Houston in 2005 or 2006 that kept him in the city for a bit longer than he had anticipated.

“I got to hang out upstairs at Rudyard’s for a really long time one night when the city flooded,” he says. “The power never went out, but the water came up the stairwell. And two blocks over, it was dry!”

The band finally were able to get out of Rudyard’s around 4 a.m., made it to the place they were crashing at by 6 a.m., then grabbed a few hours of sleep before heading to Austin for the next show.

For more on the Magnificent, visit MagnificentSoulBand.wordpress.com
For more on the Woggles, visit TheWoggles.com
KEEP THE HOUSTON PRESS FREE... Since we started the Houston Press, it has been defined as the free, independent voice of Houston, and we'd like to keep it that way. With local media under siege, it's more important than ever for us to rally support behind funding our local journalism. You can help by participating in our "I Support" program, allowing us to keep offering readers access to our incisive coverage of local news, food and culture with no paywalls.
Make a one-time donation today for as little as $1.