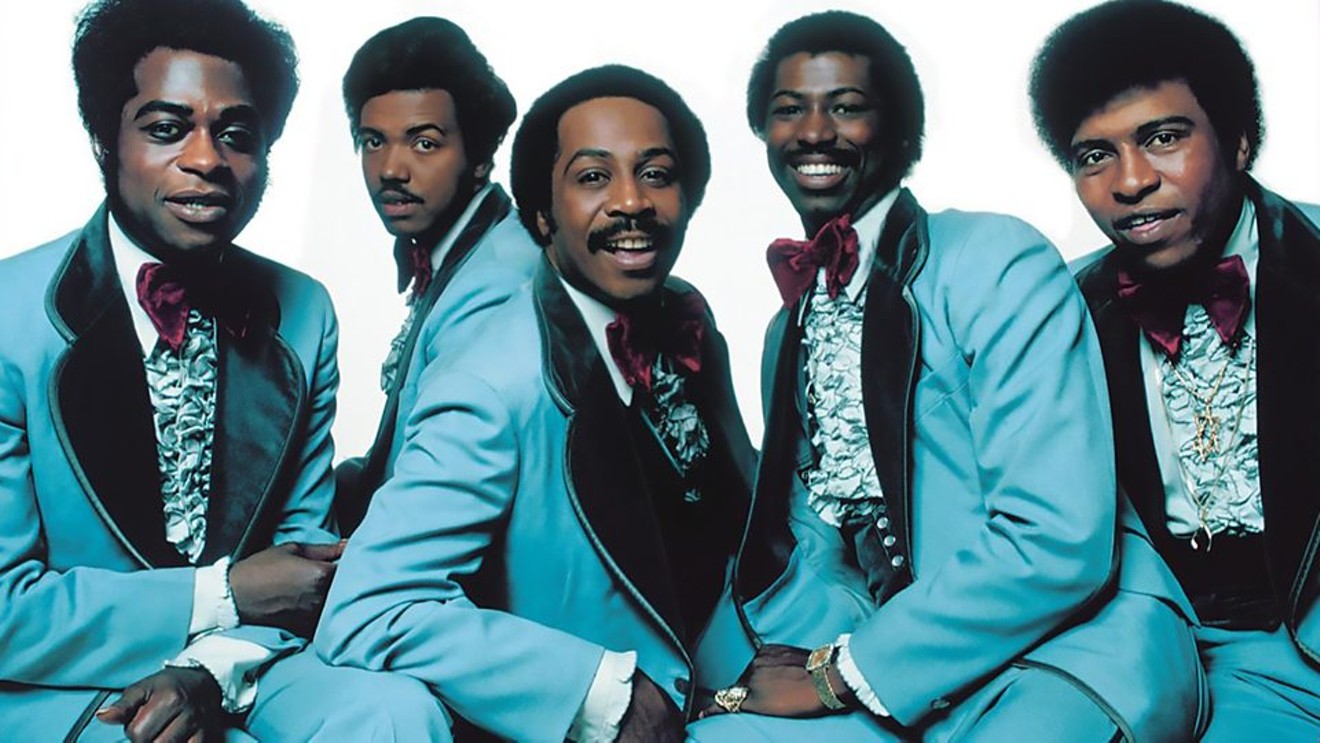 Harold Melvin and the Blue Notes were one of Philly Soul's greatest exports in the '70s. L to R: Lawrence Brown, Jerry Cummings, Harold Melvin, Teddy Pendergrass, and Bernie Wilson. Record cover detail
Update 4:45 p.m. 5-25-21: Reserved seating tickets for this event are no longer available. The show will stream live on Miller Outdoor Theatre’s website, YouTube channel, and Facebook page, and be available for 48 hours. The free hill seating does not require a ticket, and is separated in 180 pods that can accommodate up to 10 people for social distancing. Once those pods are filled, ushers will direct people to the back of the hill for seating, but the show will not be visible.

Original story:
If asked to name a well-known and successful Soul/R&B record label of the ‘60s and ‘70s, most people would blurt out “Motown,” while others might go grittier with “Stax.” But it’s the third leg of that sonic stool—Philadelphia International—that often gets over looked. 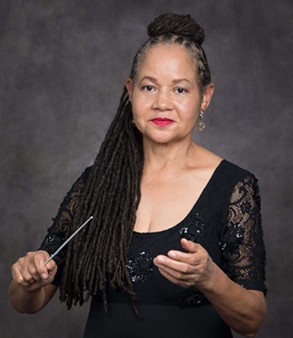 Community Music Center of Houston Music Director Dr. Anne Lundy
Photo by Provost Studio/Used with permission by Dr. Anne Lundy
Acts including Harold Melvin and the  Blues Notes featuring Teddy Pendergrass (“If You Don’t Know Me By Now” “Wake Up Everybody”), the O’Jays (“Love Train” “For the Love of Money”), Billy Paul (“Me and Mrs. Jones”), The Stylistics (“Break Up to Make Up”), the Spinners (“I’ll Be Around” “The Rubberband Man”), and the Three Degrees (“When Will I See You Again”) and many others all recorded for the label. And as fans will tell you, the Philly Sound works equally well for booty shakin’ and baby makin’.

The Community Music Center of Houston pays tribute with the upcoming Philly Soul Sound concert on May 29 at Miller Outdoor Theatre. The longtime nonprofit center has long hosted musical workshops and given lessons to students ranging in age from preschoolers to senior citizens. They receive some funding from the Houston Endowment, but are also in the midst of a campaign to further help acquire a new, permanent home in a building on Holman.

“COVID of course has changed everything this year, but we are so excited about doing this. When we got the chance to do a [themed] show, Philly was the first thing that popped into my head,” says CMCH Music Director, teacher, and renowned violinist Dr. Anne Lundy. “I grew up with this music. And of course, the I love the fact that the Philly Sound uses strings so much.”

Vocalist Tweed Smith, who has represented Houston in the International Blues Challenge, been a member of the funk rock group WAR, and sang on records by Ringo Starr and others, will act as MC/Host. She adds “I have such a connection because I’ve been singing some these tunes for most of my career. Plus a friend of mine who is now deceased, Linda Creed, co-wrote a lot of these songs. I just love this music.” 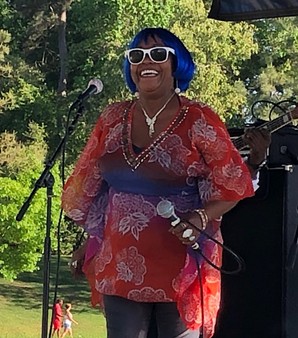 Tweed Smith onstage recently at The Woodlands Waterway Art Festival.
Photo by Bob Ruggiero
Finally, Henry Mosley of CMCH and the show's drummer, offers this: “The way that Thom Bell with the orchestrations and Linda Creed with the lyrics worked together was incredible. And they also [regularly] used members of the Philadelphia Orchestra on the records. As much as I love the arrangements of Paul Riser at Motown, the work that these players did at Sigma Sound Studios in Philadelphia is never gonna happen again. The opportunity to do this show was just too perfect.” Mosley's daughter Vivian will also be performing on piano, keyboards, and vocals. She has been in CMCH programs since the age of five.

Mosley and Lundy say that one of the biggest challenges was in not coordinating socially-distant and safe rehearsals for the players, but simply trimming down their original “wish list” of tunes to ones that could be performed in one show.

“We made our lists and didn’t disagree on any song!” Mosley laughs. In fact, they have a completely different set list for any potential Philly Sound Pt. 2 show next year.

“We knew we’d have to do some of the mega hits like ‘For the Love of Money.’ That’s been used in so many commercials and TV shows. And also ‘La-La Means I Love You’ by the Delfonics,” Lundy says. She adds that due to COVID restrictions at Miller Theatre, no more than 16 performers could be on stage (and socially distant) at one time. Hence, a 15-piece orchestra will back a variety of vocalists.

“We couldn’t have any backup singers or dancers. Maybe next year!” Mosley laughs. “And that’s a challenge when you’re doing the Spinners!” But for Smith (who will also serve as the show’s emcee), the lack of backing vocalists won’t be an issue. “These songs are so familiar, everyone in the audience is going to sing them with us!” she says. “And I know that!”

“For me, my favorite is ‘Then Came You’ by the Spinners and Dionne Warwick,” Mosley says. “That was my mom’s jam when I was like in kindergarten, so I heard it a lot.”


And for Lundy, the song she’s looking most forward to playing is perhaps one of the greatest, sultry, slow jam songs of all time: “Close the Door” by Teddy Pendergrass. When the late singer did it in concert, it could precipitate a chorus of screams and a shower of ladies’ unmentionables tossed onstage at the man some called “The Black Elvis.” Not that that’s going to happen at this family friendly show.

The Philly Soul Sound concert starts at 8:30 p.m. on Saturday, May 29, at Miller Outdoor Theatre, 6000 Hermann Park. For more information, call 832-487-7102 or visit MillerOutdoorTheatre.com. Free seating on the hill and in reserved seating, but you must secure the reserved seating online.

For more on the Community Music Center of Houston, visit CMCHouston.org
KEEP THE HOUSTON PRESS FREE... Since we started the Houston Press, it has been defined as the free, independent voice of Houston, and we'd like to keep it that way. With local media under siege, it's more important than ever for us to rally support behind funding our local journalism. You can help by participating in our "I Support" program, allowing us to keep offering readers access to our incisive coverage of local news, food and culture with no paywalls.
Make a one-time donation today for as little as $1.