The Rumjacks Raise a Pint to Celtic Punk Rock 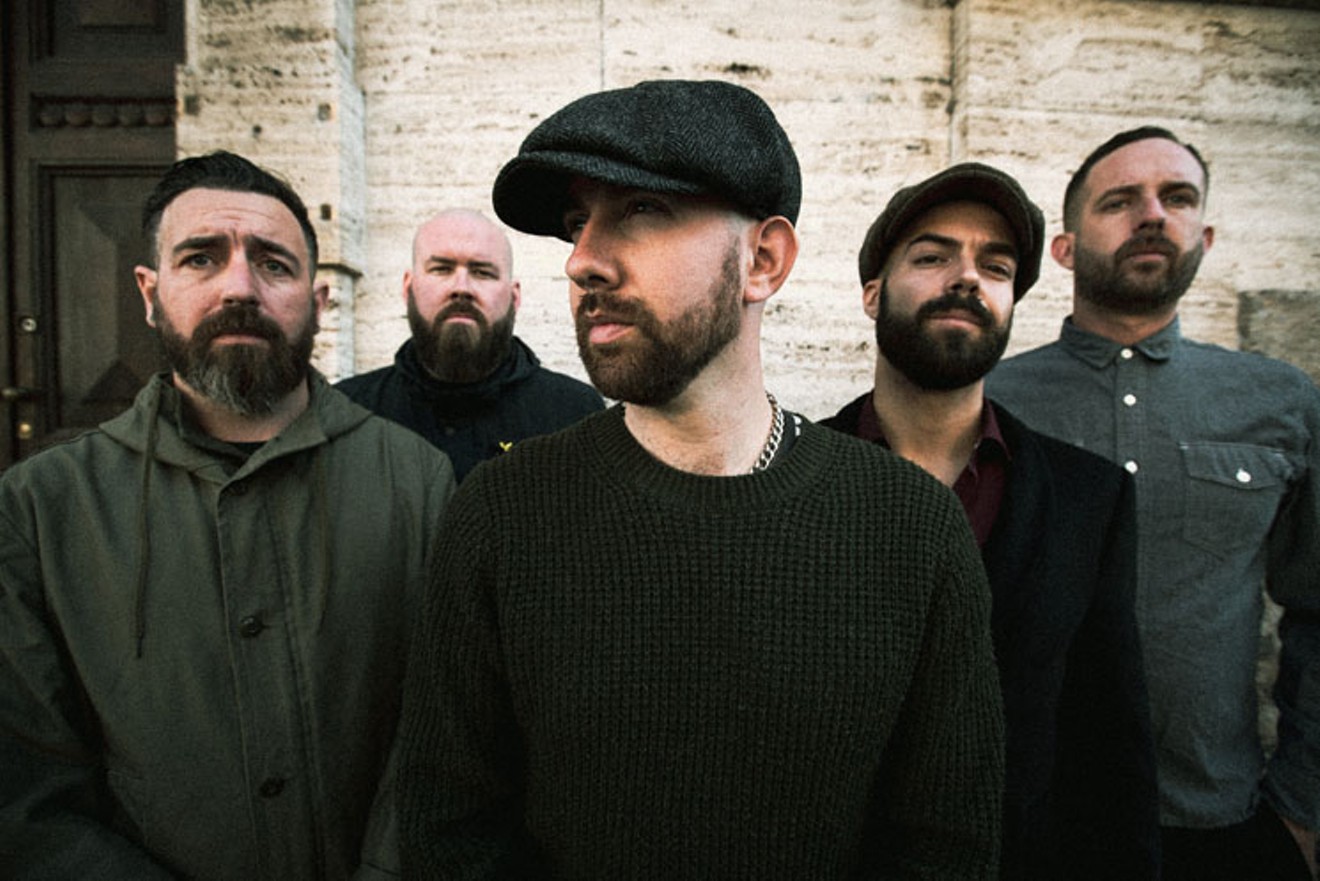 The Rumjacks in 2022: Gabe Whitbourne, Johnny Mckelvey, Mike Rivkees, Pietro Della Sala and Adam Kenny. Photo by Antonio Invernizzi/Courtesy of Earshot Media
When Johnny McKelvey’s photo shows up on the Zoom screen about 10 minutes past the scheduled interview time, it’s something of a surprise since he’s not the band member scheduled to appear. But he’s all apologies.

“Sorry, it’s Johnny! Mike wasn’t able to do the interview, so they just told me about this five minutes ago. I hope it’s OK!” he says amidst the sound of clinking silverware in the background. “I’m, um, having lunch in a pub.”

record cover
But of course, McKelvey is at a pub, which seems very fitting as a co-founder of Celtic punk rockers the Rumjacks. And when he adds that it’s an Irish pub, in Boston, it couldn’t be more perfect.

McKelvey and his band mates will be back in Beantown on (what else?) St. Patrick’s Day for a series of four sold out shows in March supporting the Dropkick Murphys, certainly the best-known practitioners of Celtic punk rock. But before that, the tour (which also features openers the Bombpops) will land in Houston at the Bayou Music Center on March 2.

So, for any band trafficking in the same style of music, a support slot on this particular tour must be like hitting the Irish lottery, right?

“Ha! It does sound like that on paper, doesn’t it?” McKelvey laughs. “It will definitely be an amazing experience. And I’m sure it will be just as fantastic in real life!”

However, McKelvey’s accent isn’t Irish or Celtic or even Bostonian—it’s Australian.

The Rumjacks formed in the city of Sydney in 2008 with their debut EP, Hung, Drawn & Portered appearing the next year. They continued to release music and found some acclaim with the 2011 single “An Irish Pub Song.” The tongue-in-cheek look at all the trappings of “Irish Pubs” around the world has gotten nearly 78 million views on YouTube.

The current lineup includes original members McKelvey (bass), Gabe Whitbourne (guitar) and Adam Kenny (bouzouki/mandolin), as well as Pietro Della Sala (drums). The newest member is lead vocalist/guitarist Mike Rivkees. He joined in 2020, replacing original singer Frankie McLaughlin, whose departure was not easy or without controversy.
After multiple arrests and even a jail sentence for domestic violence and assault over the years, McLaughlin was fired in April 2020 after alleged threatening behavior and acts against fellow band members, crew, and even audiences. The band had stood by McLaughlin through the years, but felt enough was enough.

“To prevent potential legal ramifications we will not go into details, but neither will we use ‘musical differences’ as a justification of our decision, you all deserve better than that,” the band wrote on their website. “The decision itself has been carefully considered by all members and management of the band and is a reflection of our desire to continue writing and performing together as The Rumjacks.”

Just a few days later, the Boston-bred Rivkees, who had been singing with the band Micky Rickshaw, was announced as the new frontman.
With all due respect to any band’s other players, there is, of course, a greater challenge in replacing this position. It could go like Brian Johnson joining AC/DC and taking a group to even greater heights. Or like Gary Cherone’s ill-fated brief time with Van Halen (through no fault of his own, it should be mentioned).

“You hit the nail on the head. You replace a drummer? Not many people raise an eyebrow. But when you change a singer, fans are used to that person and have a connection with them, and it resonates louder. We were very aware of that,” McKelvey says.

So, there was a lot riding on Rivkees’ first record with the band, 2021’s Hestia. And they couldn’t be more pleased with the result.

“With Mike, we’re in a much better place and we knew what he was capable of. We were fans and friends of him ourselves, and very comfortable with it,” he says. “But that doesn’t mean everybody around the world feels that way. We enjoyed the recording process, for the first time in a long time, and it brought the fun back into making the music. We felt comfortable and confident.”

Johnny McKelvey, Gabe Whitbourne, Mike Rivkees, Adam Kenny and Pietro Della Sala.
Photo by Ingrid Andrasi/Courtesy of Earshot Media
So much so that the Rumjacks have just released another record, the 8-song EP Brass for Gold with songs like "Bounding Main," "Bloodsoaked in Chorus," "On a Sombre Sunday," "One for the Road" and "Kicking Soles." Though the very number of tracks stretches the definition of the format.

“With Hestia, there were tons of songs. We put 15 on that record. We couldn’t cut any one of them! How do you choose your least favorite child, admit that to them, and banish them from family activities? You can’t!” McKelvey laughs.

“We couldn’t tour because of the pandemic, so we went back to writing and demoing. We met last summer. It was too much for an EP and not enough for a [full-length], so we just decided to give people a bank for their buck with an EP.”
Rivkees write the bulk of the lyrics. “Mike is non-stop. Whether it’s a guitar riff or a whistle line or completed songs, he’ll show it to us and say, ‘What do you think of this?’’’ McKelvey says. “So, we started building this bank of songs and we needed to get together. We workshopped the songs, dissected them, and then structured them from beginning to end.”

The Rumjacks then played them “loud and in your face” for further tweakage before finally recording in Italy. With regular touring affected by the pandemic, the band played a few outdoor acoustic shows. And are well aware of their new, more international lineup.

“We’ve got three Australians, one Bostonian, and one Italian in the lineup!” McKelvey says. “And thankfully, this [lineup] has been accepted and embraced.”

As to how a group of Aussies embraced a music not necessarily known for attracting a lot of Aussies, McKelvey says most people are surprised to find out the amount of and diversity of music that’s appreciated on the continent outside of, say, Men at Work or Midnight Oil.
“There’s a lot of immigrant population in the country and it’s very diverse. My parents are Irish, and there’s a huge Irish/Scottish/Celtic folk community. So that music was always around,” he says.

McKelvey recalls how he originally associated Irish traditional rockers the Pogues as “his parents’ boring background music” before coming around himself and discovering punk bands like the Clash as well.

“It’s good music, the [Irish/Celtic] sound. It’s singalongs and storytelling. It’s love, death, beers and everything in between,” he offers. “I think the marriage of folk, Celtic and punk rock music is an easy one. And people love it.”

As the sound of silverware clanking and people talking in the back becomes audible again, one can imagine that McKelvey might just be staring down hungrily at a meal that’s growing cold. So, the final question is: What exactly is the Celtic punk rocker having for lunch at the Black Rose Irish Pub in Boston right now?

“Uh, right. Well, it’s about as typical as it gets. It’s a Guinness with fish and chips!” McKelvey laughs. “Which is not a bad way to spend a Thursday afternoon!”

For more on the Rumjacks, visit TheRumjacks.com
KEEP THE HOUSTON PRESS FREE... Since we started the Houston Press, it has been defined as the free, independent voice of Houston, and we'd like to keep it that way. With local media under siege, it's more important than ever for us to rally support behind funding our local journalism. You can help by participating in our "I Support" program, allowing us to keep offering readers access to our incisive coverage of local news, food and culture with no paywalls.
Make a one-time donation today for as little as $1.