That's a LOT of mouths to feed on the road! The Tedeschi Trucks Band in 2018: Ephraim Owens, Kofi Burbridge, Mike Mattison, Mark Rivers, Kebbi Williams, Susan Tedeschi, Derek Trucks, Alecia Chakour, Tyler Greenwell, J. J. Johnson, Elizabeth Lea, and Tim Lefebvre. In 2019, Burbridge passed away and Lefebvre left the band. Photo by Shervin Lainez/Courtesy of OnTour PR
It’s a Monday morning and just about 36 hours since the Tedeschi Trucks Band have stepped off the stage of New York’s storied Beacon Theatre, wrapping up their ninth annual run of gigs at the venue. The string of six shows saw them play an estimated 80+ different tunes.

So you’d think that bandleaders/married couple Susan Tedeschi and Derek Trucks would be relaxing and resting up in a Gotham City hotel. Maybe sleeping in and ordering room service. And normally they might. But, you know, it is football season. Derek Trucks and Susan Tedeschi pose with the loves of their lives: Each other, and a sweet, sweet guitar.
Photo by Shervin Lainez/Courtesy of OnTour PR
“We ended up taking an early, early flight home so we could get back, sit on the couch, and watch our team lose. So I don’t know if it was worth it!” Trucks laughs. His home team—the Jacksonville Jaguars—lost 27-34 to the Carolina Panthers the previous day.

“But you guys in Houston, now you have a quarterback! He lit it up yesterday! And that was fun to watch. Even as I was rooting against the Texans because they’re a divisional foe!”

Ah well, maybe Trucks, Tedeschi, or one of their other 10 bandmates might find the time to sneak over to NRG Stadium and sabotage Deshaun Watson’s locker when they’re in town next month. The band opens a short fun of fall dates November 6 at the Hobby Center.

Back to the Beacon, Trucks is certainly no stranger to the venue, having played a similar run for many years when he was with the Allman Brothers Band. But this was the first one since the loss of keyboardist/flautist Kofi Burbridge, who was not only a founding member of the TTB in 2010, but was in Trucks’ own band even before that. Burbridge suffered a heart attack in 2017, recovered and rejoined the band, but then had a health setback that lead to his death in January of this year.

It’s one of a string of personal losses the band has had in recent years of musical friends and mentors including Gregg Allman, Trucks’ uncle (and Allman Brothers founding drummer) Butch, and Col. Bruce Hampton. Tedeschi and Trucks were both playing with the jam band father at his 70th birthday concert when Hampton had a heart attack and died onstage.

“There were quite a few things that made this [Beacon run] different, the main one was not having Kofi there,” Trucks reflects. “In some ways, I feel that the band is trying to find a new solid ground underneath us. But the history and collective memory with that crowd, I feel like everyone’s along for the ride. And there’s something really comforting about being in the Beacon. And we felt that way this time more than ever before.”


The current lineup of the band that mixes rock, soul, and blues includes Trucks (lead guitar), Tedeschi (vocals/guitar), Kebbi Williams (sax), Tyler Greenwell and J.J. Johnson (drums/percussion), Mike Mattison, Alecia Chakour, and Mark Rivers (vocals), Ephraim Owens (trumpet), and Elizabeth Lea (trombone). Gabe Dixon – at first just filling in for Burbridge after he had a heart attack in 2017 – is now permanently on keyboards. And Brandon Boone is a new addition on bass. Trucks says that both players have been “godsends.”

“When Gabe first stepped in, he was holding the chair until Kofi got back, but that didn’t happen. He’s a singer too, and his spirit is so good. And when Brandon auditioned, it felt right from the start, and he’s grown and owned that role," Trucks offers. "They have just been busting ass. I almost forget when we got to the Beacon that they hadn’t even played some of the songs that we were going to do! They were really quick learners and hard workers. I’m excited to get into the studio and write tunes with them.”

The TTB’s last full length studio album, Signs, came out back in February. And while not being overtly political or social in the non-love themed tunes, it was definitely the band’s most topical record. They’ve also just released as a digital download High and Mighty, featuring three unreleased songs from the Signs sessions and one live track. It was a 2019 Record Store Day exclusive vinyl release.

Both Trucks and Tedeschi are record store geeks, and have visited Houston’s Cactus Music. But don’t think that just because they made the record means they get any special treatment when it comes to owning it. “I have a few friends at home from all walks of life that when it’s Record Store Day, they’ll cue up and wait in line to get shit! I’m not going to go stand in line, but I like seeing what they get and hopefully will lend me a few sides,” Trucks says. 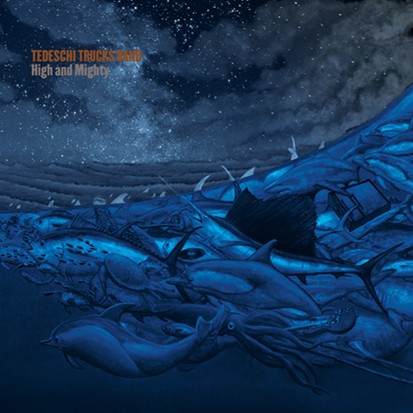 Fantasy Records digital cover
“But they printed such a limited quantity of High and Mighty. My brother and his friends, none of them were able to score it! I think we only got one copy ourselves! It’s one of the few times I’ve called to get one of my own records and been told ‘I’m sorry!’”

Tedeschi and Trucks have a son and daughter – now in their mid/late teens – who have spent part of their lives since they were toddlers on the road with their parents. And while Trucks says they’ve been blasé at times about what mom and dad do for a living, that’s changed since they've gotten more involved in music.

“My daughter’s into Cream now and a lot of the things I heard growing up. I love that I can see them light up about stuff. Or when we’re out of town, they go out of their way to get tickets to see a band they like, so that's satisfying,” Trucks says.

“But they do speak out during our shows. I’ll get pretty good reviews from them – they’ve seen us enough to know the difference between a good show and a bad one!”

Asked what he would change if he could go back to 2010 and reevaluate the expenses and planning of forming, recording with, and taking out on the road a band with a dozen members, Derek Truck’s answer is succinct: Nothing.

“You gotta go on faith and we’re doing this because it’s what we want to do. The only way it starts full working is if momentum catches, and that only happens when you put everything you have into a band and get lucky and people want to hear it,” he says. “There’s no guarantee that just because you love something, that means other people will. But there’s nothing I would change. There was a lot of heavy lifting to start this band at the beginning. And that’s what made it count, especially to those in the band now who have been here the whole time.”

Finally, the Tedeschi Trucks Band will soon enter their bosses’ own Swamp Raga Studios on their property in Jacksonville to work on their next record. And so the question must be asked: Depending on how the season goes – might there be a tune about the woes of a certain sun-soaked local NFL franchise football team?

“No one needs that!” Trucks laughs. “I do love [football], it’s so much fun. But everyone has a personal pain about their team.”

For more on the Tedeschi Trucks Band, visit TedeschiTrucksBand.com
KEEP THE HOUSTON PRESS FREE... Since we started the Houston Press, it has been defined as the free, independent voice of Houston, and we'd like to keep it that way. With local media under siege, it's more important than ever for us to rally support behind funding our local journalism. You can help by participating in our "I Support" program, allowing us to keep offering readers access to our incisive coverage of local news, food and culture with no paywalls.
Make a one-time donation today for as little as $1.