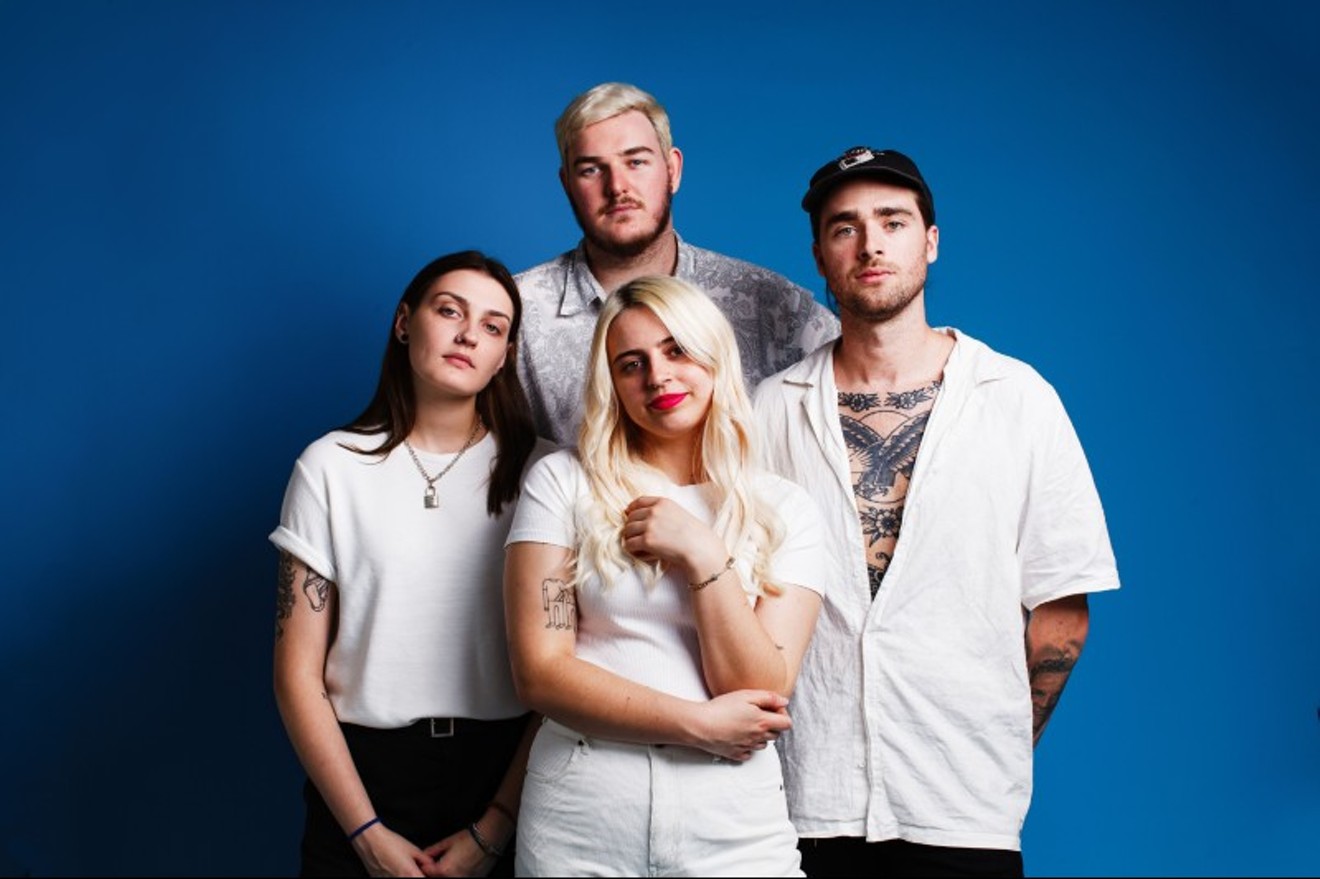 Doing a cross-country phone interview might not sound like the best way to spend part of one’s day off – particularly if that day off followed a 36-hour day – but that’s what Eliza Klatt did on the second day of her first U.S. music tour. Klatt is the front woman for the indie rock outfit Eliza & The Delusionals, yet another talented Australian band making modern music business waves. She chatted with the Houston Press ahead of the band’s visit here Tuesday, February 18, in support of Silversun Pickups.

The band had to change two flights to the States because of visa issues and missed the first date of the tour, a Tuesday night in Ventura, California.

“It was super annoying because you can never guarantee your stuff’s going to be ready in time for the trip because it does take a long time,” Klatt said of the visa process. “We did have to miss the first show in Ventura, which really sucked, we were devastated about that but there was nothing we could really do.”

Once they had those issues resolved, they took the earliest flight into Los Angeles, then were spirited to Santa Ana for the tour’s second night.

“We came and did the show, it was really amazing,” she said. “Pretty much our day, including the flight, it was like a 36-hour day so it was really, really tough. We were able to push through it and hopefully now we won’t be super jet-lagged, we’ll be on this time zone now. But yeah, it definitely was a really hard day for us in terms of just trying to push through and do a show.”

Klatt and bandmates Kurt Skuse, Tex Martin and Ruby Lee were boosted by the support of their tour mates, Silversun Pickups.

“I feel like no matter where you’re from artists will support artists because they understand how tough it can be sometimes,” Klatt said. “This is the first tour we’ve done (in the States) and we’re so thankful for Silversun Pickups for inviting us. I’ve been listening to that band since I was like 15. It’s really wild.”

It’s been a wild ride for the band, which formed in 2015 and has zoomed to some early, global success.

“I always loved music ever since I was really young. I remember going to see Coldplay in like 2008 and I just loved their live show so much that I knew that was what I wanted to do as well, because it was so inspiring.”

Klatt learned to play bass and then guitar on a hand-me-down acoustic guitar gifted to her by her mother. Once the band formed, they went the usual route, gigging hard at home, primarily in Gold Coast, and releasing music onto social media platforms. Last year, the single “Just Exist,” took YouTube by storm. Before she knew it, Klatt said, radio stations had worked the track into their rotations and show offers began pouring in. The breakthrough song topped the charts of SiriusXM's alternative rock station Alt Nation.

“This is what we’ve sort of been working towards for the last couple of years, but we really didn’t even have time to think about it, it kind of just happened,” she said. “We put out ‘Just Exist’ and then, sort of all of a sudden, it was there.”

Besides the run with Silversun Pickups, the band has other key dates circled on the calendar. In March, they’ll release the EP A State of Living In An Objective Reality. They’re headed for SXSW. They’re on the lineup for June's Firefly Music Festival, a fest which is being headlined by Rage Against the Machine, Billie Eilish and Halsey.

“A lot of those festivals, we don’t even know the lineup until they’re announced so yeah, when we woke up to see the Firefly lineup we were like, ‘Oh my God, that’s actually huge.’ It’s really overwhelming, in a good way.”

It’s a lot to take in for a young band, she admitted. Klatt lives in Pottsville, a small beach town near Byron Bay on Australia’s east coast, and suddenly a whole world has opened up to her because of music. Although they’re a young band, and in spite of things like visa issues or jet lag, she said they’re steeled for these opportunities because of the music scene back home.

"I think it’s a really good scene. There’s a lot of diversity in genres which is really cool, there are lots of really amazing bands coming out of Australia and into America,” she said, and we traded names of some current favorites like Courtney Barnett, Hatchie, Amyl and the Sniffers, C.W. Stoneking and The Chats, who are headed for House of Blues in April.

“I think one thing that makes it hard is we live so far away from the USA, so it’s actually kind of a big financial thing for a lot of bands to come and tour over here,” she said. ““But, there’s a really nice, flourishing scene there, there are lots of different genres and bands and it’s a really supportive scene there, too. It’s really awesome to see so many Australian bands come through. We feel really lucky that we get to be a part of that.”

Naturally, Klatt is more focused on the road and its promises than home. She said she and Skuse spent a holiday in New York, but have never performed in the States until this month. We asked about her expectations for Texas.

“I did a layover, on our way back from New York we did a layover in Houston, and we were talking with this lady on the plane, she was really nice and she was from Houston. She was living in New York and had moved to Houston and she was like, ‘Everyone’s so nice there, blah blah blah,’” Klatt recalled. “So, we have an expectation of everyone being really nice, everything being really big and lots and lots of barbecue.”

Eliza & The Delusionals open for Silversun Pickups Tuesday, February 18, at House of Blues, 1204 Caroline. Doors at 7 p.m. and music at 8 p.m., $29.50-$49.50, all ages.
KEEP THE HOUSTON PRESS FREE... Since we started the Houston Press, it has been defined as the free, independent voice of Houston, and we'd like to keep it that way. With local media under siege, it's more important than ever for us to rally support behind funding our local journalism. You can help by participating in our "I Support" program, allowing us to keep offering readers access to our incisive coverage of local news, food and culture with no paywalls.
Make a one-time donation today for as little as $1.