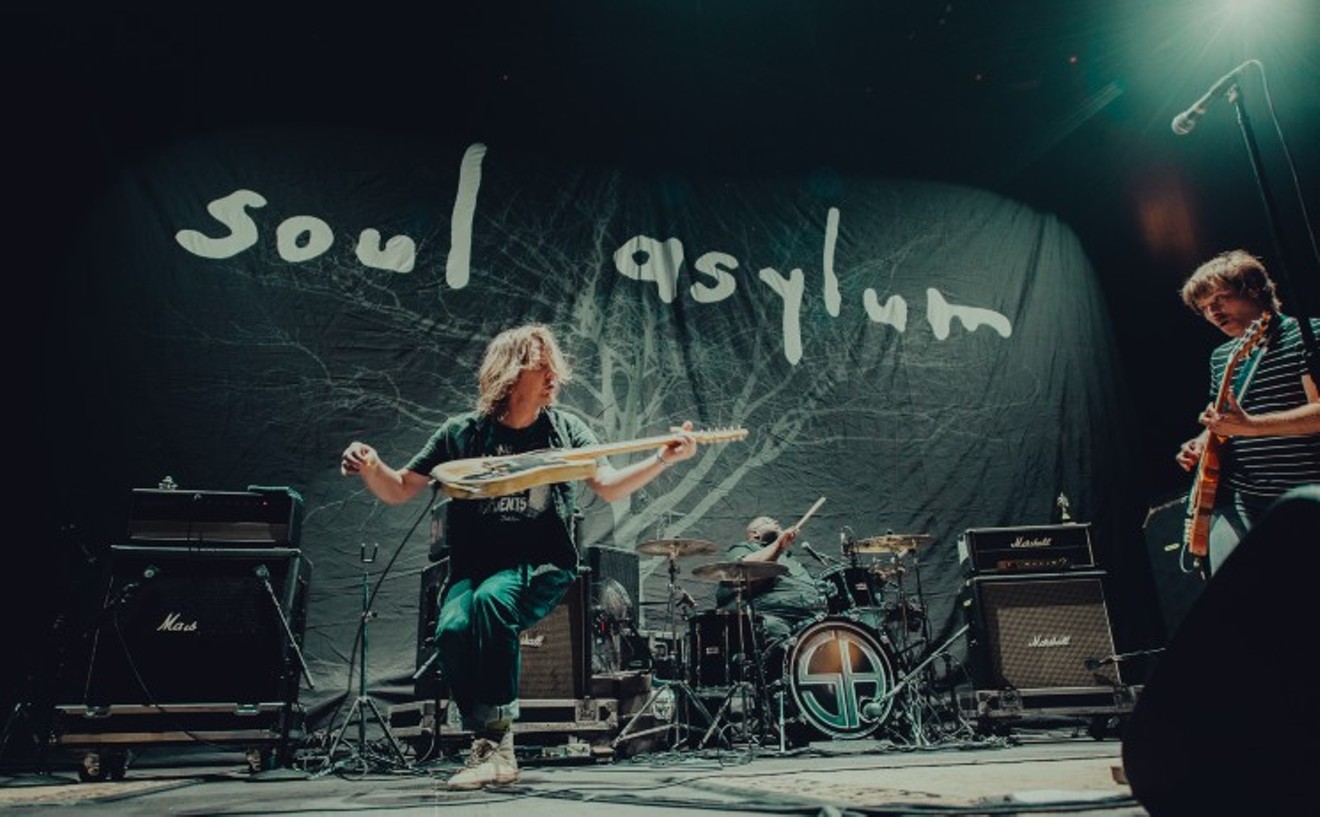 Soul Asylum Photo by Jenn Devereaux, courtesy of Independent Music Media
The irony of stopping, starting and stalling a tour for an album titled Hurry Up and Wait is not lost on Dave Pirner. The vocalist and guitarist for Soul Asylum has seen and done a lot since forming the band in the early 1980s and nearly breaking MTV with a viral hit a decade later. But, he admits, the challenge of bringing live music to fans in the COVID era is something entirely different.

“I’m certainly not an expert and that’s, I think, the most frustrating part. You just really can’t get a straight answer, so you have a lot of kind of erring on the side of caution. All the trepidation is not really conducive to rock and roll shows, having a bunch of people get together to socially distance is kind of crazy. I think everybody thought this was pretty much over. So, when I saw the surge or the uptick, it had occurred to me this could affect my tour.”

Delta’s dawn did affect Soul Asylum’s latest tour, a summertime run scheduled with Local H and Juliana Hatfield. Some early dates were scrapped altogether and Hatfield dropped off the tour completely. But Soul Asylum is still planning to chug into Houston Tuesday, August 31, for its scheduled date at Rise Rooftop, Midtown’s open-air venue.

Hurry Up and Wait, the band’s 12th full length album, released in April 2020, right at the start of live music’s long COVID shutdown. Local H released a new studio album about the same time, which featured Hatfield, whose latest album dropped earlier this year. Pirner explained why it’s important for artists to be able to play new songs in front of live audiences.

“That’s what we do,” he said matter-of-factly. “It’s the primary part of the job. We make records and we tour. That’s pretty much the gig. So, taking the live show out of it — I mean, I understand there are musical entities out there that don’t play live, but we ain’t one of ‘em.

“Without that, we’re nothing,” he simplified. “It’s kind of always been about the live show and the connection we make. We don’t have a lot of sophisticated ways of going about this other than getting in a van and going somewhere and playing. It’s our bread and butter and our peanut butter and jelly, too.”


Pirner was able to connect with fans during lockdown through weekly online events called The Quarantine Sessions. He teamed with bandmate Ryan Smith to deliver 100 songs to cyber audiences, from their best known tracks like “Misery” to songs like “Make Her Laugh” from the new album and deeper cuts like “The Game” from 1998’s Candy From a Stranger. We asked if the band learned anything from the online concerts that might enhance the experience for fans who will soon see the band live.

“I mean, I guess I learned the power of technology, the Internet or whatever. I wouldn’t normally be doing stuff like that, so it was better than nothing. It gave us a reason to keep our chops up, so to speak,” Pirner said. “That was kind of interesting, to play songs I hadn’t played in ages. You get a little bit of reaction, people can comment and stuff. Once again, it’s much better than nothing.”

“The sort of joke I was making was a lot of times when we’re playing a show people are taking pictures or filming or I don’t know what they’re doing with their phones, so there we were with just the phone and no people,” he said. “I can hardly imagine playing to a crowd that’s all wearing masks. You want to kind of feel some sort of response and that just sounds really crazy to me, people wearing masks and then the music is loud and then they’re trying to talk to each other. It’s kind of ridiculous.”

Whatever the circumstances, fans want to hear the songs and Soul Asylum has an abundance, particularly tracks from ‘90s alt-rock staples like Let Your Dim Light Shine and Grave Dancers Union, from which “Runaway Train” emerged. The song was on heavy rotation on MTV and gave audiences a entryway to Pirner’s prolific output. He wrote the songs and wrote the book about the songs, a review of Soul Asylum’s collected lyrics titled Loud Fast Words, which is a play on the band’s Minneapolis origins as Loud Fast Rules. We asked what keeps him writing songs 40 years into a music career.

“It’s just a part of my life and something that’s always happening in my head,” Pirner said. “I guess I’m not necessarily trying to outdo myself every time but I’m certainly trying to do different things all the time, trying to mix it up and see what the band is going to embrace and what’s going to work for the group. There’s definitely a reaction and that’s the first phase, just seeing if somebody goes, ‘Oh, that’s a good one.’ That’s a victory for me.

“It’s a lot of just throwing stuff against the wall and seeing what sticks, a lot of persistence, just doing it as if I’m doing it for no reason. It’s like putting my shoes on or something,” he added. “I’m constantly writing notes on whatever piece of paper is closest by and then trying to gather it all together.” These days, with advanced digital recording technology, he said he can hole up and create a full demo for the band, playing guitar, drums, bass and piano. It allows him to present something more than a blueprint to his bandmates.

“It kind of takes on its own shape when the band starts developing it,” he said of any new song. “That’s always exciting, just to see if somebody’s gonna play something then I’m like, ‘Alright - that is great and I wouldn’t have thought of that.’

“I guess that’s what it is, it’s just the process and then the thrill of hearing it back when it’s finished and going, ‘Holy shit, that seed turned into something!’ — or not. I have quite a few outtakes and songs that never went anywhere and they kind of come to me at the weirdest times. Michael Bland, my drummer, will go back into the catalog and find something (and say), ‘Oh, I really like this, let’s play this.’

“It’s strange because I will be in a situation where I’m like, well, that should have been on a record. Songs get cut as you go along and they just kind of fall to the wayside," he said. "Occasionally, they do come around and that’s always satisfying. There’s a new EP coming out, it’s a bonus EP that goes with the re-release of The Silver Lining, and there’s three songs that didn’t make the record. There are songs that keep coming up. It’s always nice to see a song see the light of day and give people a chance to hear it.”


“You tend to sort of romanticize the really early days without acknowledging that it was really miserable at certain points, living in a van. It was about 12 years before we got anywhere. I mean, the band started in 1981, I think,” he said. “There’s certainly interesting things that happened along the way, there’s certainly some sad moments of people passing.

“For some reason, the first thing that came to my mind was when we went out with The Jayhawks and Victoria Williams. There were certain times where I thought Soul Asylum was drawing enough people that I could handpick the people I wanted to tour with and that just felt like a family, you know?

“I’m not big on nostalgia,” he added. “I was talking to somebody about moving to New Orleans and how it’s sort of reinvigorated my sense of music. There were a lot of bands that were sounding like Pearl Jam and Nirvana and the whole ‘grunge’ thing was a word that came much later. We’d been around for quite some time. It’s hard to sort of lump the band in with any particular movement as far as I’m concerned and I guess that’s really by design, by trying to be different from what everyone else was doing.

“I have fond memories of the early days in Minneapolis because every band did really have a unique way of making their music and presenting it. I think that informs Soul Asylum to a degree,” he continued. “The point was not to try to sound better than anybody else, the point was trying to be different. I think that’s pretty important.”

Looking forward, Pirner is excited to bring old and new songs to live audiences. Looking back, he feels privileged to have done it at all.

“We really were just kind of going by the seat of our pants and hoping that it would work out,” he said. “I feel pretty lucky to still be able to do it.”