Peter Noone today, flying the flag for '60s British Invasion. Photo by Loyd Overcash/Courtesy of Ads on the Ave.
Peter Noone has heard it for years: “You should write a book!” After all, the lead singer of British Invasion band Herman’s Hermits certainly has a lot of stories he could tell.

About hanging out with members of the Beatles and the Stones in swinging London clubs like the Ad Lib and the Scotch of St. James. About touring all through the world. About recording any of their classic ‘60s pop hits like “Mrs. Brown, You’ve Got a Lovely Daughter,” “I’m Henry VIII, I Am,” “There’s a Kind of Hush,” “I’m Into Something Good,” “Can’t You Hear My Heartbeat,” and “A Must to Avoid” among them. 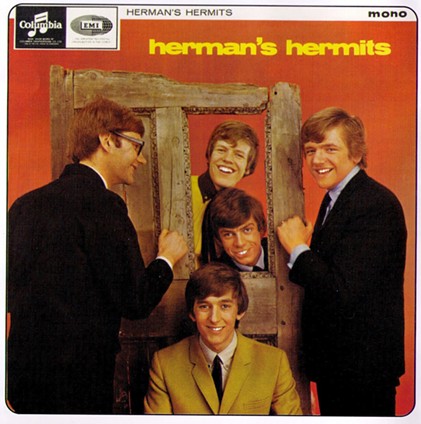 Heman's Hermits, 1965 clockwise from left: Derek Leckenby, Peter Noone, Karl Green, and Keith Hopwood. Barry Whitwam is in the center.
Columbia Records album cover
He says he keeps telling his agent he’ll “do it in ten more years” and that there’s no drama to his career and people might not be interested. But pressed, he’s at least got an idea for a true-life intro.

“It would start on August 6, 1963, in field near my grandmother’s house. That’s where a bass playing friend and I went to see the Beatles who were performing at a country fair or something like that to 112 people. They had just come back from Germany,” he offers.

“My friend sees them, quits his band, and never touches instrument again. But me, I was inspired! I needed to find guys who would work ten hours a day on being different than the Beatles and make it, and steal those young girls and boys in the audience. It’s me thinking ‘How can I be part of this?’ And then the book finishes three years later. It’s just a magical trip.”

Noone and his current version of Herman’s Hermits will play along with former Buckinghams singer Dennis Tufano (“Kind of a Drag,” “Hey Baby,” “Don’t You Care”) and former Happenings lead singer Bob Miranda (“See You in September,” “I Got Rhythm,” “Go Away Little Girl”) in the “Stars of the Sixties” package show June 21 at the Stafford Centre.

The Manchester, England-based band’s name came, famously, because some of Noone’s friends thought he resembled the character of Sherman from the “Rocky and Bullwinkle” cartoons. “Sherman” became “Herman,” which morphed into “Herman and the Hermits” and finally “Herman’s Hermits.” In addition to Noone on vocals, the lineup would shift a bit until settling on Derek Leckenby (lead guitar), Keith Hopwood (rhythm guitar), Karl Green (bass), and Barry Whitwam (drums).


Today, the music of Herman’s Hermits is unfairly dismissed by some as fluffy period  pop, with bands like them, the Dave Clark Five, Peter and Gordon, and Freddie and the Dreamers on one side of an imaginary line while “serious” bands like the Beatles, Stones, Who, and Kinks on the other. And while it’s true that latter group wrote most of their own material and experimented more, Noone says his band never wanted to be like them.

“We made a conscious decision at the beginning that we weren’t going to be a band that made records to impress other musicians. We wanted to impress young people and make music that they could play right after the BBC News. And we only had one radio station!,” Noone says. “The A-sides were always something upbeat, though sometimes we’d put something different on the B-side. I mean, our song called ‘The End of the World’ was the B-side of ‘I’m Henry VIII, I Am.’ Talk about a dichotomy!”

Peter Noone
Photo by Loyd Overcash/Courtesy of Ads on the Ave.
He notes that producer Mickie Most often brought songs to the group to record, including tracks like “Bus Stop” and “For Your Love” that, when they didn’t gel for the Hermits, became hits for the Hollies and Yardbirds respectively.

“Well, Mickie wasn’t so much a producer as he was a director. But he was my best friend, the best man at my wedding, and my daughter’s godfather,” Noone says. “We completely understood each other musically. If I talked about the reverb on the Everly Brothers’ ‘Walk Right Back’ he knew what I wanted. He knew how to pick a melody, and how I should sing the words so they would make sense and people would believe it.”

Noone left Herman’s Hermits in 1971, and members have toured in various combinations and periods of activity over the years. Green and Hopwood no longer perform actively, and Leckenby died in 1994. After some legal wrangling, Noone now fronts “Herman’s Hermits featuring Peter Noone” while Whitwam has his own version of the band, playing mostly in Europe.

In addition to a very, very active touring schedule, Noone currently hosts the Sirius/XM radio show “Something Good with Peter Noone” where he spins mostly ‘60s tunes and tells stories and anecdotes. But the energetic 71-year-old (who still looks impossibly younger) has no plans to slow down, with plenty of shows booked through the rest of the year. “A lot of people my age start to wind down, but not me. I’m really enthusiastic about the future, and naively optimistic about the future of the world,” he says.


He also recently released a cover of the Easybeats’ 1966 hit “Friday on My Mind” with the retro-sounding band the Weeklings. Noone’s version is surprisingly strong, more urgent and frantic than the original. And coming from the perspective of a man who has spent too many weeks working a shit job and really can’t wait for the weekend and time with his lady love.

Finally, asked why Texas seems to be particularly fertile found for his fans – known as “Noonatics” - the singer says is all has to do with the seeds planted in Lone Star State ears more than 50 years ago.

“Houston and Dallas were always hotspots for us, even going back to the very first U.S. tour. The band was a little bit safer for families. We got great radio play in Texas. People knew the songs even if they didn’t buy the records,” he says. “And we do well to this day, the audience is always smiling and not jaded. And I think people are looking for that kind of happiness. They don’t want to get ‘Masters of War’ all the time.”

Stars of the Sixties with Herman’s Hermits featuring Peter Noone, Dennis Tufano, and Bob Miranda plays at 7:30 p.m, June 21, at the Stafford Centre, 10505 Cash. $47-$89. For more information, call 281-208-6900 or visit StaffordCentre.com.
KEEP THE HOUSTON PRESS FREE... Since we started the Houston Press, it has been defined as the free, independent voice of Houston, and we'd like to keep it that way. With local media under siege, it's more important than ever for us to rally support behind funding our local journalism. You can help by participating in our "I Support" program, allowing us to keep offering readers access to our incisive coverage of local news, food and culture with no paywalls.
Make a one-time donation today for as little as $1.