Kevin's Heart: The Best Houston Music of The Week

This week there's more than enough to keep you entertained with performances from J. Cole, Clairo, Lupe Fiasco, Black Moth Super Rainbow, Hayes Carll, Tracy Byrd, and Roky Erickson while locals like Flower Graves, Jody Seabody and the Whirls, and more will be on hand.

Tonight you can start off with the sounds of J. Cole performing "Kevin's Heart" among other songs over at Toyota Center. Supporting his latest drop KOD, Cole has been getting bigger and bigger over the years, and his energetic sets have always been worth catching. Young Thug will be on prior as will Jaden Smith. The hip hop of Atlanta's Earthgang will also be on hand while Kill Edward will get the all ages show going. Doors at 6:30 p.m.; tickets $49.50 to $149.50.

The experimental electronics of Pittsburgh's Black Moth Super Rainbow will commandeer the downstairs of White Oak Music Hall. Easily one of the more trippy bands going, their latest release Panic Blooms is bizarre and beautiful at the same time, and should get plenty of feet moving. The ambient psych of The Stargazer Lilies will be on as well while the all ages show will get opened by Chicago's Air Credits. Doors at 7 p.m.; tickets $15.

The Cult return to give Woodlands Pavilion all of their energy.
Photo by Tim Cadiente

Thursday you can start off at Woodlands Pavilion for the trifecta of rock with Bush, Stone Temple Pilots, and The Cult. While I've never been the biggest fan of Bush, they're definitely popular with many and their debut Sixteen Stone is the alt rock bible for plenty of people. Stone Temple Pilots might have the most tortured history in rock but that doesn't mean albums like Purple and No. 4 weren't worth getting your ears on. With new singer Jeff Gutt, the band has soldiered on and their latest release Stone Temple Pilots is actually pretty solid. Of course, The Cult have always had a mystical sound and the bulk of their catalog from Love to Hidden City is full of gems. There are no other acts for the all ages show. Gates at 6 p.m.; tickets $25 to $199.50.

If that's not your thing, you could head to House of Blues when the hip hop of Atlanta's Lil Baby swings by. After watching his homies flourish with rap careers while he did a stint in prison, the rapper came out swinging and his latest album Harder Than Ever proves he's still on point. Florida's YK Osiris will be on prior as opener for the all ages show. Doors at 7 p.m.; tickets $27.50.

The one and only Hayes Carll will stop by Mucky Duck to perform two intimate sets. Carll has been going strong for a good while now, his performances are a mix of fun and heartfelt, and his latest release Lovers and Leavers is wonderful while his latest single "Magnolia Wind" is just as grand. There's no openers for the 21 & up shows. Doors at 7 p.m. and 9:30 p.m.; tickets $35 to $38.

On Friday the country tunes of Tracy Bird will be at the Redneck Country Club. Byrd has been making his rounds in the country world for a good while, though his latest album All American Texan is his strongest in a while. There's no word of openers for the 21 & up show. Doors at 6 p.m.; tickets $30 to $280.

Rico Nasty will get House of Blues on its feet.
Photo by Mario Kristian

At House of Blues things will get interesting when New York's Rico Nasty swings by. Nasty has made a name for heavy hip hop fueled with the opposite of the bubblegum pop that's infused the genre. Her latest drop, this year's Nasty is definitely worth checking out. The hip ho of the Bronx' Malibu Miitch will be the opener for the all ages show. Doors at 7 p.m.; tickets $18.

Over at White Oak Music Hall you can get your metal fix when Corrosion of Conformity return to town. These guys have been making thrash and metal for more than 35 years, and their latest release No Cross No Crown is like a mix of Judas Priest and Black Sabbath. Dallas' Mothership and Philadelphia's Heavy Temple will get the all ages show going. Doors at 7 p.m.; tickets $25.

The second annual album art showcase at Insomnia Gallery will take place, where local artists will give their takes on some of your favorite album art from over the years. Each 12 by 12 piece is framed and ready for purchase, and with food, beer and a DJ on hand, it should be a fun show for anyone who attends. Doors at 7 p.m.; Free.

Over at Satellite Bar, the hip hop of Denver's ITSOKTOCRY will be on hand to perform. Supporting his latest drop Charm School Reject, the Soundcloud rapper should definitely bring the kids out to catch him in person. There's no word of openers for the all ages show. Doors at 7 p.m.; tickets $15 to $35. 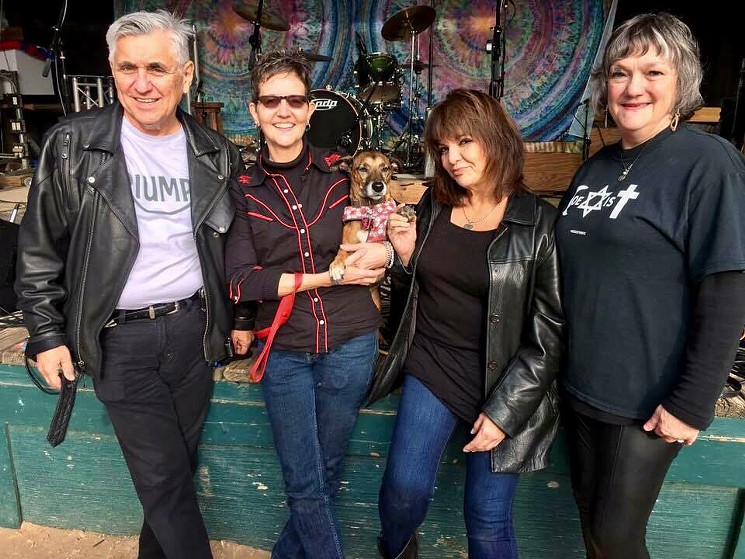 Houston's MyDolls will delight all at Rudyard's for Take This Fest and Shove It.
Photo courtesy of MyDolls

Rudyard's will get loud for the second Take This Fest And Shove It Festival. The classic Houston punk of Legionnaires Disease will headline the first night with Austin's Pretty Shitty on prior. Sets from MyDolls, The Sickness, and others will also be on hand. San Antonio's Electric Boo Hoo will get the 21 & up event started. Doors at 7 p.m.; tickets $25 to $40 depending on whether you're going to one or both nights.

Upstairs at White Oak Music Hall, Houston's Jody Seabody and the Whirls will kick off their tour with a show. While their new album Hawksamillion isn't out yet, the heavier metal sound they've embraced is worth checking out. Sets from Jealous Creatures and Darwin's Finches will occur beforehand, while Jon Black will get the all ages show started. Doors at 8 p.m.; tickets $5 for the kids, free for 21 & up.

Over at Stereo Live, the electronic dance sounds of LA's Blackgummy will perform. Supporting his latest single "Corrupted," the producer and DJ should drop plenty of fire at the 18 & up show. Missouri's Notaker will get things started. Doors at 10 p.m.; tickets $5.

On Saturday you could head to Eureka Heights for their 2nd Anniversary Party. Alongside the beer, there will be performances from Astragal and Swimwear Department, as well as DJ sets from Fred Ster and DJ Shaggy. The 21 & up event is free and runs all day. Doors at 11 a.m.; Free.

Later on at the Heights Theater, Bruce Robison and Kelly Willis will swing by to perform together. The couple bring a giant catalog of tunes from each catalog. Robison's latest release Bruce Robison & the Back Porch Band is definitely worth hearing while Willis' latest Back Being Blue from this year is a splendid album from start to finish. Ben Danaher will get the all ages show started. Doors at 7 p.m.; tickets $22 to $34.

Day two of the Take This Fest and Shove It festival will take place at Rudyard's. Sets from Die Rotzz, Trouble Boys, Burning Itch, and more will be on hand. Crusties will get the 21 & up show started. Doors at 7 p.m.; tickets $25 per day or $40 for both.

Satellite Bar will host the dreamy shoe gaze of Austin's Glaze. Listening to these guys' latest single "Daisy" it's no wonder why they're so popular, and a crazed energy in their live sets make this one worth checking out. Houston's Mojave Red will be on beforehand while Shutter will go on prior. The all ages show will get opened up by Houston's Angel Aura. Doors at 8 p.m.; tickets $10 to $12.

If you ever wanted to hear the music of The Legend of Zelda video game, then you should head to Insomnia Gallery to hear Bit Brigade perform it in its entirety. A support set from Misadventures will get the all ages show started. Doors at 8 p.m.; tickets $10.

At Mucky Duck you can catch Mike Stinson perform an intimate set. Stinson is an act everyone should see at least twice and his last release The Jukebox In Your Heart is pretty wonderful. There are no openers for the 21 & up show. Doors at 9:30 p.m.; tickets $20 to $22.

Roky Erickson brings his legendary psych back to Houston.
Photo courtesy of Paradigm

Of course, Continental Club has the goods when Roky Erickson returns to Houston. Erickson is best known for his revolutionary psych band 13th Floor Elevators, and has kept up a steady stream of releases as a solo act. His latest, All That May Do My Rhyme is a solid collection, and his live sets are worthy of your attention. The garage psych of Houston's Flower Graves will get the 21 & up show started. Doors at 10 p.m.; tickets $25.

Sunday you can make it over to House of Blues for the hip hop of Chicago's Lupe Fiasco. Prolific and enigmatic, Fiasco has been on a tear since the early 2000s, his live shows are always full of energy, and his last record DROGAS Light was well received. KOTA The Friend will be on prior while the all ages show will get opened up by Billy Blue. Doors at 7 p.m.; tickets $32.50.

Clairo will bring plenty of pop to House of Blues.
Photo courtesy of Fader Label

On Tuesday you could head back to House of Blues to catch a performance from Clairo. Making lo-fi indie pop, she's been popping off since she began and her latest single "Drown" is definitely worth checking out. The all ages show has no word of openers. Doors at 7 p.m.; tickets $13.

That's about it for this week. Please remember to stay hydrated and that drinking like an adult is what's best for everyone.
KEEP THE HOUSTON PRESS FREE... Since we started the Houston Press, it has been defined as the free, independent voice of Houston, and we'd like to keep it that way. With local media under siege, it's more important than ever for us to rally support behind funding our local journalism. You can help by participating in our "I Support" program, allowing us to keep offering readers access to our incisive coverage of local news, food and culture with no paywalls.
Make a one-time donation today for as little as $1.