Hard Piano: The Best Houston Music of The Week Pusha T will bring his stellar "Daytona" to life this week at House of Blues. Photo courtesy of Def Jam
This week there's performances on tap from the likes of Pusha T, Wiz Khalifa, Tony Bennett, Two Tons of Steel, Carolyn Wonderland, and sets from locals like Velveteen Echo, Flower Graves, Vodi, and The Hates.

Tonight you can begin at Dosey Doe for the country tunes of Doug Supernaw. The Houston artist has been going strong for a good while now, his sets are usually full of fan interaction, and his latest release Greatest Hits is pretty solid. Kyle Hutton will get the all ages show going. Doors at 6 p.m.; tickets $20.

The rescheduled Shakira show will take place at Toyota Center. For fans of the Columbian singer, this show should be epic, as her latest El Dorado is impressive. There's no word of openers for the all ages show. Doors at 6:30 p.m.; tickets $50.50 to $205.

Over at Under The Volcano, Houston's Frog Hair return after some time off to bring their oddball psych sounds to all. Though they're rumored to have new songs in the works, their debut A Long List of Shortcomings is still a favorite There are no openers for the 21 & up show. Doors at 8 p.m.; TBD cover.

Continental Club will get loud when the post-hardcore of Far member Jonah Matranga and friends return to play their album Water & Solutions in its entirety. The album, part of its 20th anniversary is definitely one that inspired tons of acts, and should sound great all these years later. The Pauses featuring a touring member of Beach Slang and Houston's Another Run will be on beforehand while texture:yellow will open the 21 & up show. Doors at 8 p.m.; tickets $12.

Thursday you could head to Woodlands Pavilion to catch Wiz Khalifa & Rae Sremmurd co-headline a set. Khalifa, here in support of his latest Rolling Papers 2 and the duo of Rae Sremmurd here in support of SR3MM together should both drop epic sets. Lil Skies will be on prior while O.T. Genasis will get the all ages event started. Gates at 6 p.m.; tickets $39 to $99.50.

Buxton is back with new tunes.
Photo courtesy of New West Records

Warehouse Live will get political for the Bands with Beto event. Supporting Beto O'Rourke, the event which features performances from Wild Moccasins, Buxton and Vodi should be worth checking out. The all ages event doesn't have any other performers. Doors at 6 p.m.; tickets $25 to $250.

At The Heights Theater you should consider dropping in to catch the stunning sounds of Carolyn Wonderland. Possibly as close as we'll get to a mix of Bonnie Raitt and Janis Joplin, Wonderland is always great live and her last release Moon Goes Missing is pretty wonderful. Pike & Sutton of jam band Little Sister will get the all ages show started. Doors at 7 p.m.; tickets $20 to $30.

At Revention Music Center, you can get all your country fixes with Billy Currington. Part of the bro country jump in the early 2000s, Currington is known for a crazed live show and a ton of fan favorites. There's no word of openers for the all ages show. Doors at 7 p.m.; tickets $17.50 to $65.

Ancient Cat Society will delight all at Insomnia Gallery.
Photo by Lauen Marek

Insomnia Gallery will get pretty lovely sounding when Houston trio Ancient Cat Society swing by to perform. Supporting their last album, Ancient Cat Society, the three piece offers sounds from another time. The singer songwriter tones of Arthur Yoria Duo will get the all ages affair started. Doors at 8 p.m.; cover $5.

At Smart Financial Centre, you can get serenaded by the silky voice of Tony Bennett. The crooner has been going strong since the mid '40s, and at 92, this is probably your last chance to see him in person. His last album Tony Bennett Celebrates 90 is a splendid collection, and tracks like "(I Left My Heart) In San Francisco" and "The Way You Look Tonight" will sound better in person. Antonia Bennett will get the all ages show started. Doors at 8 p.m.; tickets $75.75 to $131.75.

Continental Club will get swooned by the sounds of Austin's Beth Lee & the Breakups. Though Lee is from Houston, she had to go to Austin to make her name and her latest album Keep Your Mouth Shut is extraordinary. There are no openers for the 21 & up show. Doors at 10 p.m.; tickets TBD.

On Friday you might want to head to Woodlands Pavilion for the pop sounds of New Jersey's Charlie Puth. A 2018 Teen Choice award winner, Puth made his name through Youtube, and his latest album Voicenotes is steadily rising his fame. Actress and singer Hailee Steinfeld will get the all ages show going. Gates at 6:30 p.m.; tickets $20 to $69. 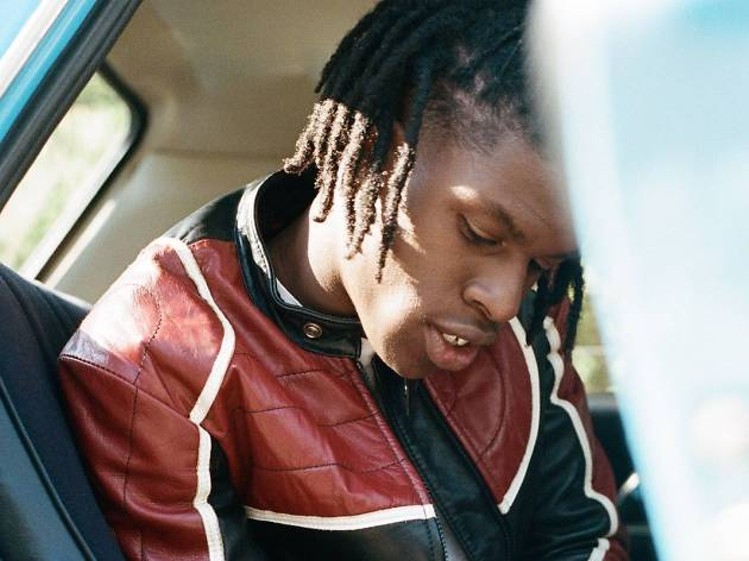 Daniel Caesar will bring all the soul to Revention Music Center.
Photo courtesy of CAA/Kevan J. Yazdani
Revention Music Center will get soulful when the neo-soul of Canada's Daniel Caesar swings by to perform. Caesar has blown up from two E.P.'s that have a ton of weight, and his last release Freudian is pretty wonderful. The R&B infused hip hop of Harlem's Teyana Taylor will get the all ages show going. Doors at 7 p.m.; tickets $45 to $89.

Over at Mucky Duck, the enigmatic Texas country of Two Tons of Steel will return for two shows. It would be enough to catch these troubadours in such an intimate setting, or to get to hear their last album Gone live, but they'll be recording these two sets as well. You can be a part of history at the 21 & up show. Doors at 7 p.m.; and 9:30 p.m.; tickets $20 to $22.

Over at The Heights Theater, the heavy throated tunes of John Moreland will bring plenty of heft to the room. Moreland knows how to captivate a room with just his voice, though his backing band should help fll in the notes from his latest, last year's Big Bad Luv. Athens' T. Hardy Morris will be on beforehand for the all ages show. Doors at 7 p.m.; tickets $22 to $184. 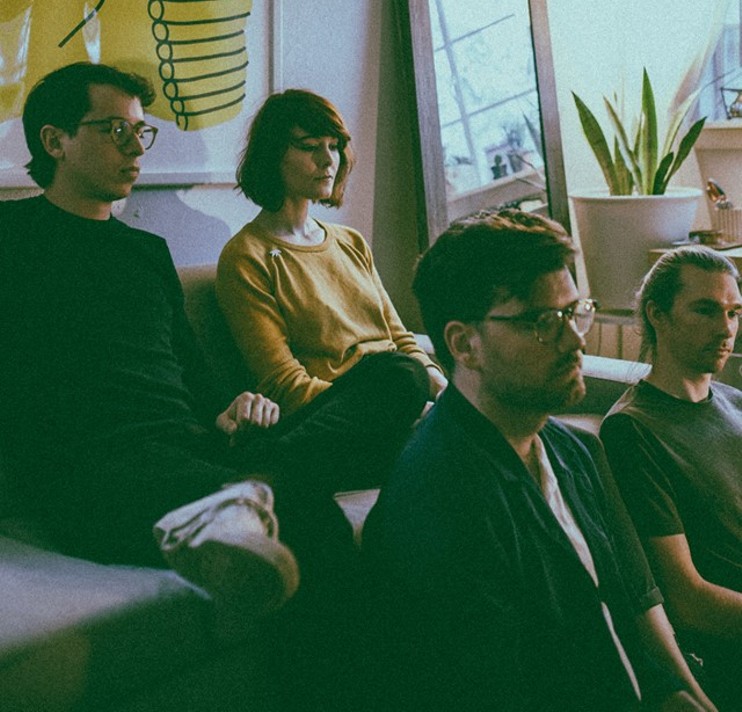 Velveteen Echo is ready to win you over with their debut E.P.
Photo by Jonathan Mazaltov
Upstairs at White Oak Music Hall, you can get all the '90s sounds when Velveteen Echo plays their E.P. release party. That E.P. Submarine is a mix of guitar swells and whispering vocal melodies. Houston's Pearl Crush will be on prior while the indie rock of Rose Ette will go on before. Tears On Tape will play their last show for a while as openers for the all ages evening. Doors at 8 p.m.; tickets $7.

At Rudyard's, the club's 40th anniversary weekend will get going with a set from Houston's Vodi. Their debut Talk is full of lush tones and melodies. The high energy of Houston's The Wheel Workers will go on prior while things will get opened by Jealous Creatures for the 21 & up evening. Doors at 8 p.m.; tickets Free.

Saturday you could and should head to House of Blues to catch the hip hop of Pusha T. Pusha's latest album Daytona was not only produced by Kanye West, but it's easily a contender for the best hip hop record of 2018. While every track on the release is pretty gold, highlights include "Come Back Baby," "Hard Piano," and "The Games We Play." . There's no word of openers for the all ages show. Doors at 7 p.m.; tickets $35. 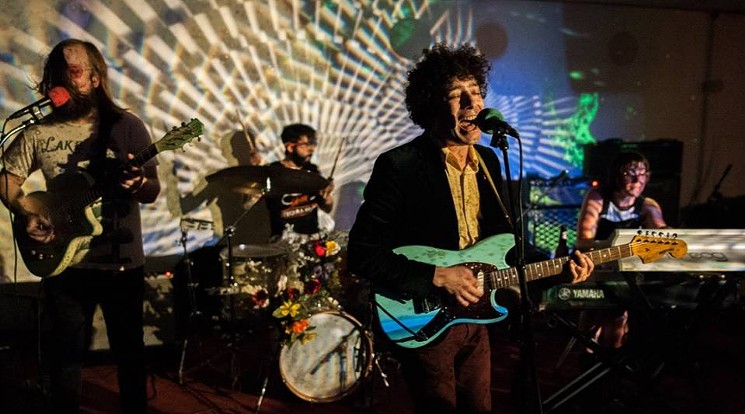 Flower Graves will get groovy at Satellite Bar.
Photo by Nicholas Kwasny

Satellite Bar will host the garage-tinged psych sounds of Houston's Flower Graves. Going pretty far on a couple of tracks, they're set to hopefully drop a new record before the end of the year, and their debut 7" Savage is on point. The crazed surf rock of Austin's Billy King & The Bad Bad Bad will be on before, while the trippy sounds of Howard and the Nosebleeds will make an impression beforehand. Austin's Rickshaw Billie's Burger Patrol will get the all-ages show going. Doors at 7 p.m.; tickets $10 to $12.

Night two of the Rudyard's 40th anniversary will take place at Rudyard's with a headlining set from Poor Dumb Bastards. The show will also have performances from legendary punks The Hates who are as big a Houston institution as the Astrodome. Their last drop Shank was their strongest. The costumed punk of The Cops will also be on the bill while the 21 & up show will get opened up by Killer Hearts. Doors at 8 p.m.; tickets Free.

If you'd rather try to help people get out of ICE detention, you can aid the Fianza Fund by heading to Dan Electros for a benefit featuring Narcons. While their debut Narcons was dark and strange, their live shows have more energy. The punk meets indie pop of Clare will also be on hand while Bask will get the 21 & up show started. Doors at 8 p.m.; tickets $10. 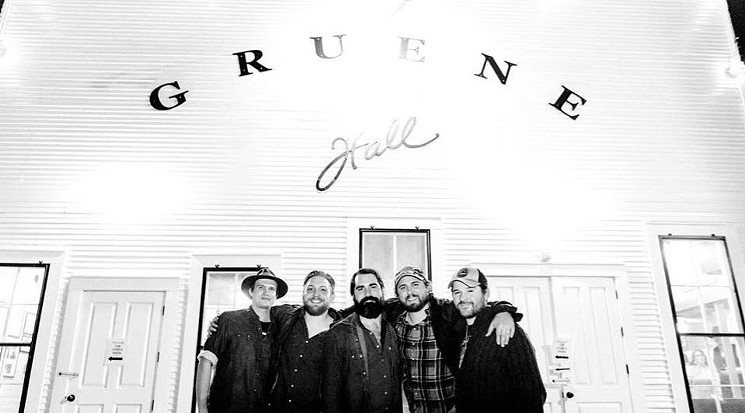 Ruckus will remind you why you love Texas guitar and country twang.
Photo by Maddie Richards

Continental Club will get tones and rocking good times, when Houston's Ruckus swing by. With a new record due sometime this year, their debut E.P. Ruckus has lovely tones and melodies. The Americana rock of Willow James will be on beforehand and the electro-pop of Miears will get the room moving with a DJ set at the 21 & up show. Doors at 9 p.m.; tickets TBD.

On Sunday you can head to Warehouse Live to catch the pop R&B of Chicago's Jeremih. Supporting his latest drop "The Light," the performer should bring heat to his set. The hip hop of DaniLeigh will be on earlier. Doors at 7 p.m.; tickets $25 to $99, the latter being a meet and greet option.

Monday you could head to White Oak Music Hall for the crazed electro-funk of Canada's TWRP. Known for insane live shows, their ultra-catchy new album Together Through Time should get plenty of dancing going. Oakland's Planet Booty will be there to get things started at the all ages show. Doors at 7 p.m.; tickets $12. together PANGEA will bring tons of energy to White Oak Music Hall.
Photo by Derek Perlman

On Tuesday, the garage punk of California's together PANGEA will be at White Oak Music Hall to get things crazy. There's something magical how these guys can take intense garage rock and add punk influence without coming off as fakers. Their live shows are like a punch to the face, and last year's Bulls and Roosters is pretty darn awesome. The all-ages show has no word of openers, but that could change. Doors at 7 p.m.; tickets $12.

That's about it for this week. Remember that a safe ride home is just an app away, and that drinking responsibly is best for everyone around you.
KEEP THE HOUSTON PRESS FREE... Since we started the Houston Press, it has been defined as the free, independent voice of Houston, and we'd like to keep it that way. With local media under siege, it's more important than ever for us to rally support behind funding our local journalism. You can help by participating in our "I Support" program, allowing us to keep offering readers access to our incisive coverage of local news, food and culture with no paywalls.
Make a one-time donation today for as little as $1.