Cream Rises to the Top...Again! Will Johns, Kofi Baker, and Malcolm Bruce play the music of their fathers (and ex-uncle!). Photo by Christine Connallon/Courtesy of Press Here Publicity
As a working band, the lifespan of Cream was relatively short. Eric Clapton (guitar/vocals), Jack Bruce (vocals/bass), and Ginger Baker (drums) got together in 1966 after playing in various combinations in other bands. They took their name from being the “cream of the crop” of rock instrumentalists at the time.

But by 1968, the infighting - mostly between Bruce and Baker – and disagreement on musical direction got to be too much. And when a bad concert review in Rolling Stone by future Bruce Springsteen manager Jon Landau literally made Clapton pass out upon reading it in a restaurant, he knew he had to break up the band. They embarked on a farewell tour and were finished by year’s end, though they released one more posthumous record. 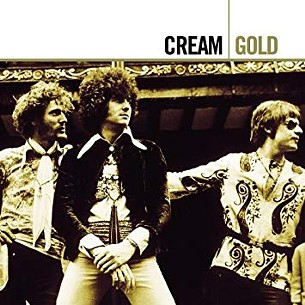 Cream was Ginger Baker, Eric Clapton, and Jack Bruce. This photo was shot during Clapton's ill-advised permed hair period...
Record cover by Polydor Records
With songs like “Sunshine of Your Love,” “White Room,” “Strange Brew,” “Tales of Brave Ulysses,” “Crossroads” “Spoonful” – all classic rock FM warhorses, the music has never gone away. A new group is now on the road playing in a show dubbed “The Music of Cream,” but this one come with some impeccable lineage: it features Malcolm Bruce (son of Jack), Kofi Baker (son of Ginger), and Will Johns (former nephew of Eric) in their forebears’ respective roles.

“There’s more interest because of who we are, but after the initial tour, we wanted to continue it. We’re honoring the music, but we’re taking it in our own direction. And it’s not like we’re not dressing up like them or anything!” Malcolm Bruce laughs.

“We’re also [improvising] onstage more. And it’s not fake. We grew up with the original guys in the band and know how they thought musically. Though Kofi and I don’t have the friction and violence that my dad and Ginger had!” On tour, a screen behind the trio projects video footage and images of Cream, so it’s as if the original band is literally looking over their shoulders.

When Jack Bruce died in 2014, his son had already worked with him on several records (in a career that spanned many genres and styles), played in his road band, and jammed with him at home. But it wasn’t like the Bruce house was blasting Cream music continuously.

“He was a very nice man, and I miss him every day. He was my dad of course, but our bond was music, and it was deep. We shared a love of music in all its forms.”” Bruce says.


“By the age of 7 or 8, I have half memories of hearing the music [of Cream]. And then I became more aware of his role in the band. But he was doing so many different projects. I have memories of [musicians] Billy Cobham or John McLaughlin and people coming in and out of the house. I remember records being played in the evening while I was up in my bedroom and hearing maybe ‘Sunshine of Your Love’ and things like that.”

Musically, Bruce thinks Cream stood out from their contemporaries in that they had a more expansive sonic nature – especially onstage. “Cream were real musicians who had paid their dues in the blues and jazz and rock worlds. And they [straddled] being more pop music and what they really wanted to do,” he says. “It was accessible and appealing music, but gave them the ability to really stretch out and open out musically. I mean, they were originally these sort of nerdy musos! Other bands of the time never really had that.”

Malcolm Bruce, Kofi Baker, and Will Johns in late 2018.
Photo copyright by Alan Messer-AlanMesser.com/Courtesy of Press Here Publicity
Of all the songs in the show, Bruce says he enjoys most “We’re Going Wrong,” with music and lyrics written by his father, and one of Jack Bruce’s signature pieces.

Malcolm says the song’s genesis came from an argument that his parents were having, but then his father lyrically expanded it into more social commentary. “So it works on two levels,” he says. “It’s about a relationship breaking down, but also how we went wrong living in this world.”

Outside of “The Music of Cream,” Malcolm Bruce is also a solo artist. His last record was 2017’s Salvation, and he’ll continue to work on his material when “The Music of Cream” tour ends. This includes an ambitious project in which he’s writing a classical opera that he hopes to debut in London down the road. Just as soon as he finishes raising the last half of the $500,000 he estimates it will cost. Until then, he’ll be on the road.

“It’s great to go out on a bus and make friends one by one, so you have to find ways to get your music out there. And then stay in touch on social media,” he says – even though he notes that the field is getting more and more crowded each day.

“There are a lot of amazing musicians out there, but it’s covered up by everyone thinking that they are musicians. And they don’t necessarily have something to say. Having said that…I do like Britney Spears and pop music too!”

“The Music of Cream” is scheduled for 8 p.m. on April 18 at the House of Blues, 1204 Caroline. $27-$66. Visit HouseofBlues.com/Houston or call 1-888-402-5837. For more on the show, visit MusicofCream.com
KEEP THE HOUSTON PRESS FREE... Since we started the Houston Press, it has been defined as the free, independent voice of Houston, and we'd like to keep it that way. With local media under siege, it's more important than ever for us to rally support behind funding our local journalism. You can help by participating in our "I Support" program, allowing us to keep offering readers access to our incisive coverage of local news, food and culture with no paywalls.
Make a one-time donation today for as little as $1.