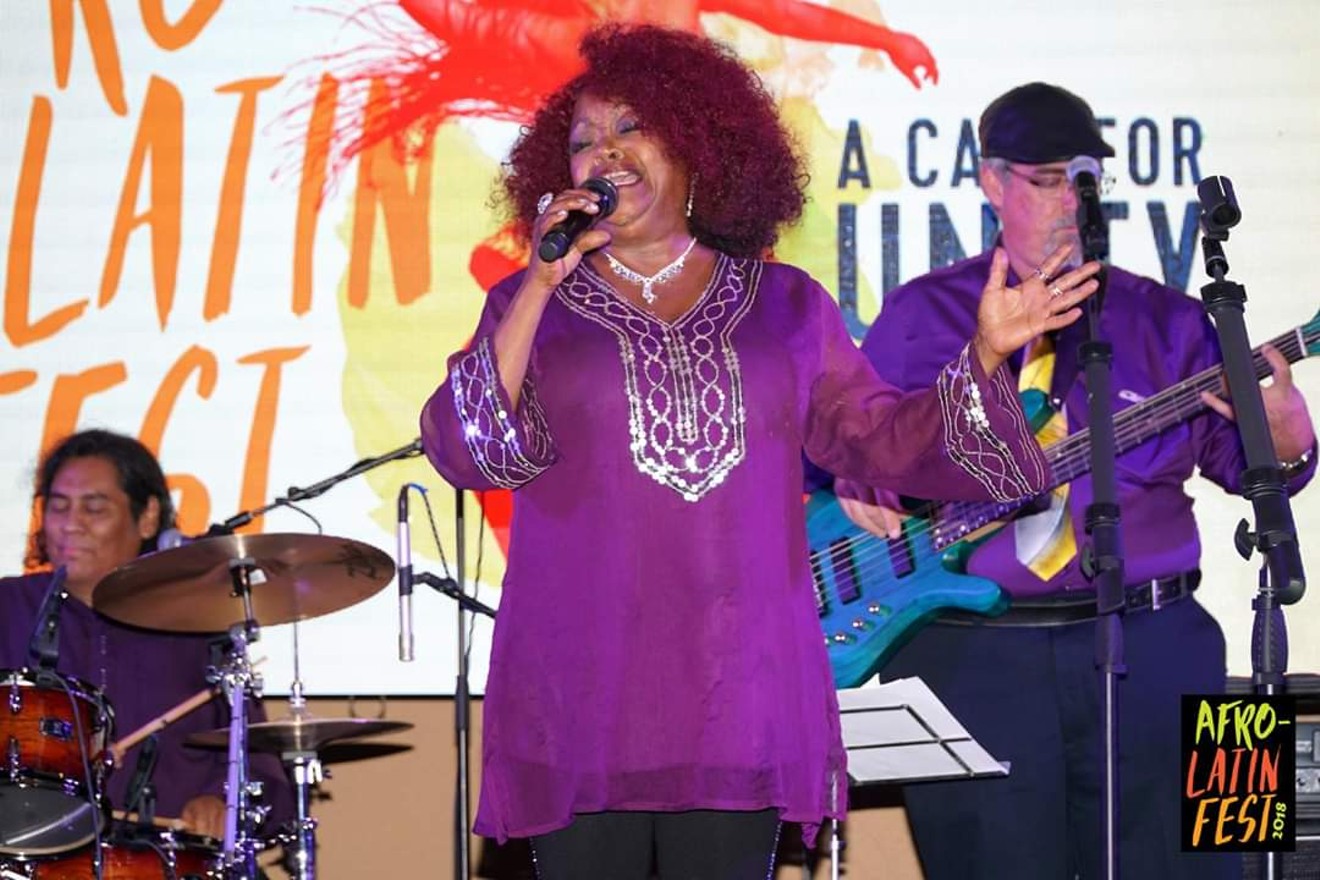 Tweed Smith belts it out onstage with bandmembers Geronimo Calderon (drums) and Quentin Calva (bass) Photo by Raymond Pat Vykoukal/Courtesy of Tweed Smith
Growing up in 1950s/60s Houston, young Alice Faye Smith – named for the popular performer from a couple of decades earlier – always knew she wanted to be a singer. There was really no other career path for her, simply because it was all around her.

Everyone in her family was musical. As a young girl and teen, she enthusiastically participated in the choir at St. Philip Missionary Baptist Church, honed her pipes at Kashmere High School, and then performed in groups at Texas Southern University.

But it was in 1969 while in the chorus of a touring company of Jesus Christ Superstar that the musical director gave her the nickname that has become her moniker since then: Tweed. Because—like the fabric—he felt she was “rough…but good to look at.”

“So much great music came out of Houston both on records and in the clubs. And I came up in a church that had many instruments and musical goings on,” Smith reflects today. “Then I learned more at Kashmere under the tutelage of [band and choir directors] Conrad Johnson and Mary Robey. Music is like breathing to me. I don’t see how there could be life without music.” 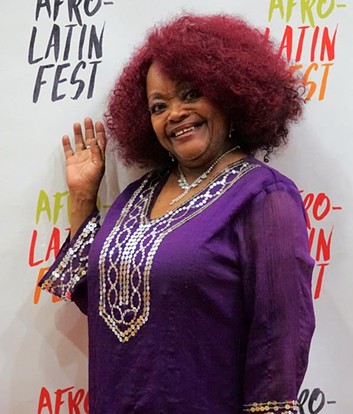 Photo by Raymond Pat Vykoukal//Courtesy of Tweed Smith
Tweed Smith’s voice has taken her to studios and stages over the world – most notably as a member of the funk rock group War from 1979-1982, where her show highlights included featured spots on songs like “Why Can’t We Be Friends?” “The World is a Ghetto” and “Good, Good Feelin’.” She also guested on a Ringo Starr solo record and performed or recorded with Bobby Womack, Sly Stone, Ronnie Laws, Dianne Reeves, and the Pointer Sisters.

Today, she’s been back in her hometown for a number of years, and with her band will play a special show to celebrate her birthday on February 2 at the Green Oaks Tavern in Houston. The group includes Ichi (guitar), Geronimo Calderon (drums), Quentin Calva (bass), and Chas Nadege on keyboards, filling in for Mike Stone.

The set list will include many, many classic and recognizable blues, gospel, and jazz covers – with a little War music thrown in. But despite the multiple genres, for her, it’s really all just one sound.

“I don't believe that you can separate the music, it’s all together. But I can tell you it comes down to different interpretations and arrangements,” she says. “I may make it sound sweet and soft or a bit harder. You can jazzerize, gospelrize, or bluesicize anything. And I thank God he’s given me a voice that allows me to interpret many types of music through song.”

Onstage, Smith is a dynamo of voice and movement, exuding an inner glow and sheer happiness in her performance. And in the spirit of blues belters like Koko Taylor, Etta James, and Ruth Brown, she’s also a big voice in a small package.

“It just happened to be the package that I was given!” she laughs. “I believe that has a lot to do with my presentation and impact. A lot of times, people don’t expect a big voice from the little girl. But it got me in a lot of doors, and it continues to open them for me. I'm the little girl with the big mouth! No, wait, ‘big voice’ sounds so much better!” 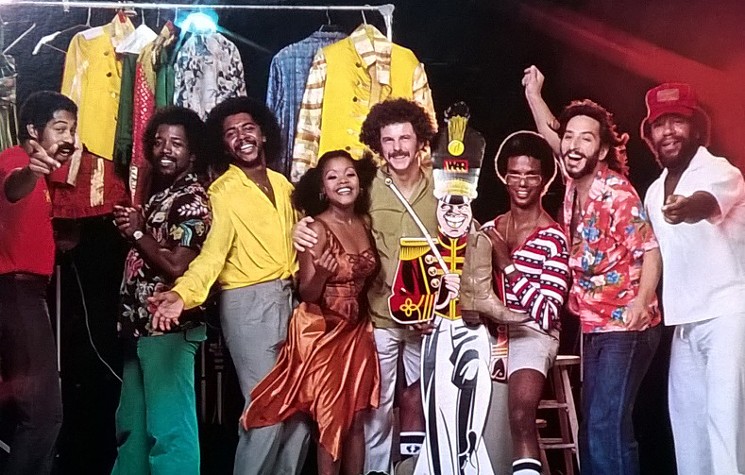 The interior gatefold of War's "The Music Band 2": Lonnie Jordan, Luther Rabb, Ron Hammon, Tweed Smith, Lee Oskar, Harold Brown, Pat Rizzo, and Howard Scott. Not pictured: Papa Dee Allen.
MCA Records cover
As for her years with War, she appeared on the records The Music Band, The Music Band 2, and The Music Band Live, along with playing scores of shows all over the globe. Smith calls it the “greatest experience of her life,” although one that she had little time to prepare for.

“You better know it was a jolt! Quite an experience. I was expecting to add a gospel sound to one song, but then it turned into something much more. I remember the band’s producer calling the record company and saying ‘we got a girl now!’” she says. “The shows were back to back, we were on the covers of so many magazines, and played on a lot of TV shows. And I was the only girl in a world-renowned band!”

Followers of War know that today the original players still performing have split into two camps, with Lonnie Jordan fronting War and Howard Scott, Harold Brown, and Lee Oskar in the Lowrider Band. But while their business and personal disagreements run deep, nobody has a bad word to say about Tweed.

In fact, she guested with War when they played in Houston at the Miller Outdoor Theatre in 2013 and the Lowrider Band at the same venue a year later. “I love them all,” she says. “I can’t help it!”

But back to her upcoming celebration show (actually the second of two to mark the actual January 24 date). Smith says her band will be augmented by several guests she’s invited to show up. And while you might think it offbeat to throw your own birthday party, Tweed Smith just wants to have everybody and anybody come in and bask in her own profound joy of her 67 years on this planet.

“It’s to celebrate me being here on Earth!” she laughs. “I’ve done everything I could to get out of it, but God has kept me here!”

For more on Tweed Smith, visit MoShows.com
KEEP THE HOUSTON PRESS FREE... Since we started the Houston Press, it has been defined as the free, independent voice of Houston, and we'd like to keep it that way. With local media under siege, it's more important than ever for us to rally support behind funding our local journalism. You can help by participating in our "I Support" program, allowing us to keep offering readers access to our incisive coverage of local news, food and culture with no paywalls.
Make a one-time donation today for as little as $1.