Mickey Gilley: The Original Urban Cowboy Publicity photo provided by Zach Farnum for 117 Entertainment
Mickey Gilley is probably not into numerology. But there are two double digits that he brings up several times each during our interview: 83 (his age) and 17 (his Billboard No. 1 country music hits – the titles of most which he rattles off with ease).

“George Strait has more No. 1 hits. But I can’t complain! He’s one of the best. And he’s a good looking guy!” Gilley laughs. “I’m doing pretty good to be as old as I am and still out there on the music circuit. It’s been a wild ride, it’s been fun, and I’ve had a great time! I’m going to continue to play until my health fails! I just still enjoy performing, and I still enjoy meeting people.”

Gilley’s storied career in music actually began in Houston. As a teenager in the early 1950s, he moved here from Louisiana to work construction, dabbling in some playing and singing. He cut his first record in 1957 (“Ooh Wee Baby”) and rambled around the South. He eventually settled in Pasadena, and spent a decade playing the Nesadel Club. In 1971, he became business partners with local club owner Sherwood Cryer, morphing his club Shelly’s into Gilley’s as a showcase for the performer which – along with a country music TV show on Channel 39 in Houston – boosted his profile. 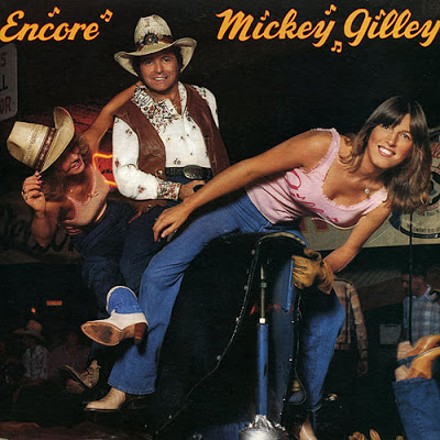 While Mickey Gilley originally did not want a mechanical bull in, it became the centerpiece of his club and his career.
Epic Records 1980 album cover
On a parallel trajectory, his two cousins who also played piano had found success in their fields: Jerry Lee Lewis in music and the Rev. Jimmy Swaggart in religion.

In 1974, Mickey Gilley scored his first No. 1 hit with “Room Full of Roses” (whose actual lyrics are not romantic at all). It set the template for many of his hits: a sound blending country and pop that showcased his smooth vocals, deft ivory tinkling, and lyrics (penned by others) of love losses and regrets, (“I Overlooked an Orchid,” “She’s Pulling Me Back Again,” “That’s All That Matters,” “A Headache Tomorrow (Or a Heartache Tonight).”

He also found surprising success “Gilley-izing” R&B tunes made famous by Ray Charles (“You Don’t Know Me”), Sam Cooke (“Bring it On Home to Me”), and Ben E. King (“Stand By Me”).

“I wanted to be a rock and roll star growing up, but when ‘Room Full of Roses’ hit big, that’s when I said I should try to do that,” he says. “But I also liked ‘Don't the Girls All Get Prettier at Closing Time.’ That was a hot record for me. I made it like a rock tune, like my cousin Jerry Lee’s ‘Whole Lotta Shakin’.” And then I got a real shot in the arm with Urban Cowboy."

Ah yes, Urban Cowboy. The 1980 film starring John Travolta and Debra Winger was largely set in and filmed at Gilley’s in Pasadena, using many regular clubgoers as extras. Based on a 1978 Esquire magazine article by Texas journalist Aaron Latham, it perfectly captured the zeitgeist of a time and place in the burgeoning energy-based economy of Houston and its surrounding suburbs. And the men and women who lived (as the movie's tagline put it) “hard hat days and honky tonk nights.”

Gilley recalls that Latham had been brought down to the club by Houston Post music writer Bob Claypool, and Latham was particularly interested in the mechanical bull that was originally used to train rodeo riders, but had been repurposed as a Gilley’s bar game. Claypool introduced Latham to a cantankerous man wearing dirty overalls and suspenders who was taking out the garbage. The writer thought he’d just met the Gilley’s janitor, but soon discovered it was actually Sherwood Cryer in his usual dress-down outfit.


Gilley was not impressed with the resulting article – he thought it was making fun of country music and his customers with some of the literary flourish and repeated lines of “twang, twang.” But when Paramount Pictures become interested in turning the piece into a movie, it was Cryer who saw and seized the opportunity.

“I thought putting in the mechanical bull was a huge mistake. I thought a lot of people would get hurt and we’d get sued. And both of those things happened!” Gilley says - though presumably he's changed his tune since then. “Sherwood knew I didn't like the article, but when we were on a plane in first class seats going out to California to meet about the movie, he told me not to saying anything bad about it! I said ‘what side of the bed did you get up on?’”

But then when Cryer informed his partner that John Travolta was up for the lead part, that changed things. “I thought instead of Saturday Night Fever, we could do Country Night Fever. And if we filmed in in the club, it could do a lot of things for us,” Gilley continues. “Even after we signed the agreement, I didn’t think it was really going to happen until I saw the Paramount Pictures trucks drive into the parking lot!”

Well, it did do things. Gilley’s became world-famous after the movie’s success, though increasingly as a tourist attraction instead of a local honky tonk. Gilley and Cryer had disagreements about the club’s operation, and lawsuits between them flowed.

The original Gilley’s burned to the ground in mysterious fire in 1990 after Gilley gained control of it. The rest of the area (including a rodeo arena) was bulldozed in 2006 to make room for a Pasadena school. But the name of Gilley’s at least has graced other nightclubs in Las Vegas, Oklahoma, and Dallas, with varying amounts of actual Mickey Gilley involvement.

Gilley's most recent record is a 2018 collection of duets with Troy Payne on country classics.
Album cover
“Hindsight is 20/20. I wish that Mr. Cryer would have agreed to my idea, which was to franchise the club. We could have had Gilley’s all over the place!” Gilley says. “And we had the right to manufacture the bull. But he didn’t want to do it because he wouldn’t have control.”

Today, Mickey Gilley is still on the road, often partnering with singer/guitarist Johnny Lee, who was also featured prominently performing in the Urban Cowboy movie, scoring its signature soundtrack hit with “Looking for Love” (Gilley’s “Stand By Me” was on it as well).

The current Urban Cowboy Reunion Show includes both men with a 9-piece backing band with singers. Lee opens the show, followed by Gilley’s set, then the pair come together for a 25-minute medley of songs from the movie.

Gilley is also still recording – last year’s collaboration with Troy Payne called Two Old Cats features 13 duet covers of country classics, many of which have age as a theme. What Mickey Gilley can’t do anymore, unfortunately, is play piano. A freak 2009 accident while helping a neighbor move furniture crushed four of his vertebrae and temporarily paralyzed him. He never regained the coordination to play, so these days he just concentrates on the singing.

As for his famous cousins, Gilley pinpoints the last time they were in the same room at the same time together was in the late ‘80s when People magazine arranged a photo shoot with the trio in Jimmy Swaggart’s Louisiana church. And Gilley stills says unequivocally that Jerry Lee Lewis is his musical guidepost and inspiration. Though – as he jokingly tells his audiences today – maybe he should have taken a different relative’s path.

“I always say that I made a big mistake trying to follow Jerry Lee in the music industry. I should have followed the Reverend Swaggart instead. He made more money than me and Jerry Lee put together!”

The Urban Cowboy Reunion with Mickey Gilley and Johnny Lee is 9 p.m. on July 19 at Stampede Houston, 11925 Eastex Freeway. $20 and up. For more information call 281-219-2006 or visit StampedeHouston.com
KEEP THE HOUSTON PRESS FREE... Since we started the Houston Press, it has been defined as the free, independent voice of Houston, and we'd like to keep it that way. With local media under siege, it's more important than ever for us to rally support behind funding our local journalism. You can help by participating in our "I Support" program, allowing us to keep offering readers access to our incisive coverage of local news, food and culture with no paywalls.
Make a one-time donation today for as little as $1.