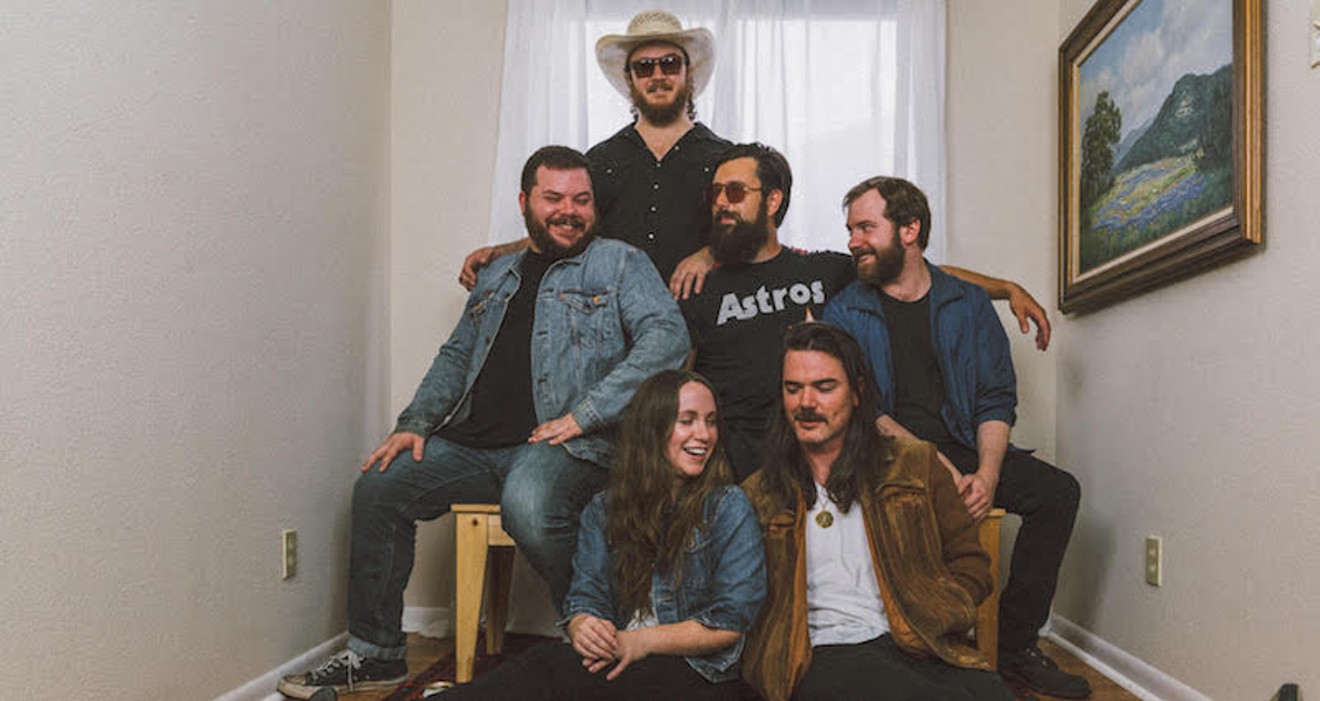 Houston’s music community is as large as the city itself, but for those paying attention there are musicians and bands that in a pre-pandemic time, would continuously pop up on lineups around town. One of those groups,
Vodi, will perform on Friday, April 30 at White Oak Music Hall, as they open for Matthew Logan Vasquez in a socially distanced and seated indoor show.

“Basically everybody has fronted a band at some point,” says lead singer Tom Lynch. Lynch is joined by his wife Haley who is also known for her songwriting and harmonizing skills in Dollie Barnes and Ancient Cat Society.

The six piece band recently announced the official membership of another Ancient Cat Society and Buxton member, Sergio Trevino. It was a natural step for the band to take as the Lynches describe Trevino as “family.”

“I think everybody is everybody else's biggest fan so there's not a ton of ego,” says Tom, the primary songwriter for Vodi. “It’s a really tight knit group, really family like. Everybody is super sweet and also super talented so we kind of fell into one of the more amazing things.”

This week's performance will be Vodi's first live and full band performance since the pandemic began and like so many musicians, they are ready to get back on stage.

“To be quite honest, White Oak has been really great with keeping things socially distant and I know they are really serious about keeping everything clean and being on the up and up,” says Tom.

The band is also pumped for the opportunity to open for another long time friend Matthew Logan Vasquez. Tom warmly remembers the first time they met when Vasquez years ago and he generously offered the then new couple a chance to sing a song on stage and play his guitar.  “Vasquez is such a sweet dude. He’s a dream to open for,” says Tom.

Vasquez and Vodi make for a perfect bill. Though each band has a distinct sound, they share a sweet, indie spirit and light catchy songs which upon closer inspection, reveal rich layers of sounds and imaginative lyrics.

In 2017, Vodi released their first and well received album Talk. a beautiful reflection of songwriting and musicianship that clearly borrows from the past while taking listeners to the future.

In songs like “Pressure,” Lynch and his band mates manage to pull dreamy and romantic sounds from the ‘70s and ‘80s while pushing into a more modern realm.

"It has been four years in November," says Tom of their debut album. "It's weird, I didn’t think about it but I put the album on this morning and I'm really happy to say, I still really like that album. I think we say this in just about every interview, but music is so subjective. We just try to put something out that we love and if other people like it, that’s just a really big bonus."

Following Talk, Tom had gotten right back to writing for a second album when life had other plans.  He and Haley got married, bought a house and started a family, all of which naturally changed his approach to writing.
“I think that we have about 14 songs in demo form right now and we've been sitting on them” says Tom.

Both Lynches agree that it is easy to separate the material for each band because though they do share songs, each project has its own primary songwriters. “It also kind of just depends on what we've been listening to. Our different influences are what inspires us and then we just go on from there,” says Haley.

Though all the bands associated with Vodi and its members have a different vibe and sound, they share a knack for harmonizing, most likely a result of their deeply rooted and wholehearted connection and love for one another and the city.

“It’s a very family oriented place down here,” says Tom of Houston. “The writers are great, the bands are great. It’s a small, tight knit community and there's also not heavy competitiveness. I'm not sure if that helps or hurts the quality, but it sure makes it a lot more fun.”

Vodi will perform with Matthew Logan Vasquez on Friday, April 30 at White Oak Music Hall, 2915 N. Main, 8 p.m, tickets $120/table of 4-$50/table of 2
KEEP THE HOUSTON PRESS FREE... Since we started the Houston Press, it has been defined as the free, independent voice of Houston, and we'd like to keep it that way. With local media under siege, it's more important than ever for us to rally support behind funding our local journalism. You can help by participating in our "I Support" program, allowing us to keep offering readers access to our incisive coverage of local news, food and culture with no paywalls.
Make a one-time donation today for as little as $1.