The Betts Boys are Ramblin' Men

Duane Betts and Dickey Betts show father-son guitar fluidity on the Ramblin' Man DVD. Video screen grab
As even a casual student of rock history knows, there’s a challenge when a musician son goes into the same business as his already world-famous father. Add in playing the same instrument and then also performing in dad’s band, it seems like it would be a lot of pressure.

But that’s actually never been the case for Duane Betts – singer/guitarist son of legendary Allman Brothers Band co-founder/singer/guitarist Dickey Betts. And for him, the roles of father and bandleader never got confused or overlapping. 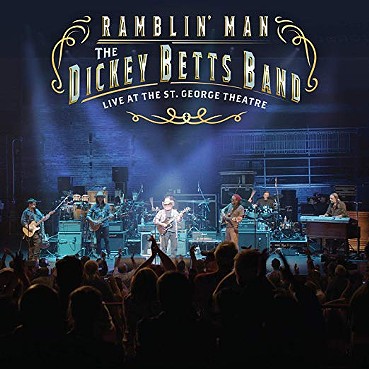 BMG CD/DVD cover
“I’ve played alongside of him for many years. He’s a great leader and everybody looks to him,” Betts the Younger says. “This tour was a bit different because he hadn’t been playing much, so I took on a sort of secondary leadership role just trying to move the situation along in rehearsals. But we look to him and trust him with the utmost respect.”

The tour he’s referring to was a short jaunt last year, captured on the new CD/DVD package Ramblin’ Man: The Dickey Betts Band Live at the St. George Theatre. The setlist lies heavily on ABB material that Betts wrote like “Blue Sky,” “Jessica,” “In Memory of Elizabeth Reed,” and the title track, which actually was the ABB’s highest charting single. There is also solo material and blues covers.

Duane Betts recalls that the band was told about the live recording not too long before the show that was chosen, and that his father didn’t even known it was being filmed until about an hour before he stepped on stage. But he says that the band didn’t do anything different knowing that this particular performance was being documented for history.

“It felt pretty spontaneous and captured the band on a fun night for that run. I think it was pretty representative of what we were doing,” he says. “You try to forget about [being recorded]. That might be in your head, but you get into the music and just forget about being recorded if you’re doing your job properly.”

Most of the material sticks to the arrangements from their familiar studio and live counterparts, though there’s plenty of room for soloing and improvisation. And with a grizzled white beard, worn cowboy hat, and workingman’s clothes, the now 75-year-old Dickey Betts certainly cuts a distinct visage. His sometimes-muffled voice may not (quite understandably) have the range it used to, and his familiar guitar parts are slowed down a bit. But there’s a certain Lion-in-Winter-Survivor aspect to his performance.


Of course, Duane Betts is also playing guitar parts originally done by his namesake, Duane Allman. Though it was Duane’s brother Gregg —along with the other surviving ABB members Jaimoe Johanson and Butch Trucks—who fired Dickey in 2000. It all gets very meta, but Duane says he can both respect the source material and try something different with it.

“The interesting thing is we can play the songs however we want. My dad wrote them and can do whatever he pleases with them. And they take on a different sound every night,” he says. “But I don’t think about staying too close, because I’m not in a tribute band. And he doesn’t want us to mimic the original versions too much. The Allman Brothers Band did it their way, but you can’t think about trying to do a ‘better’ version than the one on Live at Fillmore East for god’s sake!”

As for his favorite song of his dad’s to play, Duane says you can’t beat sliding into the middle section of “Blue Sky,” especially when played in an idea setting of an outdoor amphitheater in the summer under good weather with people dancing.

Of course, Duane Betts also has his own thriving career to look after. After guesting with the Devon Allman Project on the road for a year, the scion of Southern Rock Royalty formed their own group, the Allman Betts Band (whose lineup also includes bassist Berry Oakley Jr. – son of founding ABB bassman Berry Oakley).

Their great debut album Down to the River is a collection of mostly original tunes with a familiar vibe. But even with the lineage of the lineup, they are definitely their own group performing on their own terms. We spoke with Allman this past spring just prior to the album’s release and their Houston show. While in town, he also caught up with singer/guitarist Mark May, who was previously a member of the Dickey Betts & Great Southern. Devon Allman - son of Gregg Allman and Duane Betts' current bandmate - guests on his father's "Midnight Rider."
video screen grab
However, things didn’t go as planned for the tour a bit later in Europe when the Allman Betts Band had to cancel some shows there, as well as 30+ additional dates the United States. That’s because Allman had to have an emergency appendectomy and recovery time. Not ideal for a band promoting their debut release and trying to establish a fan base.

But Betts reports that his partner is on the mend and now back in the United States. “Devon is good, he just has to have another little procedure and some recuperation time. But we’ll be back at it soon. When you’re going at it hard, sometimes things happen.”

As for Dickey Betts himself, the Rock and Roll Hall of Famer is recovering from a freak accident when a fall at his home in Florida resulted in a pretty serious brain injury. It occurred just a month after the show captured on Ramblin’ Man. This was the latest in a series of health issues that Dickey Betts has faced in recent years. But his son reports good news on that front.

“His health is good! I saw him before the [Allman Betts Band’s] European tour for a few days and we went out and had a great dinner,” Duane says. “I posted a picture of my stepmother on him on my Instagram. He looks good and he’s feeling good. He’s probably even better than he was before that!”
KEEP THE HOUSTON PRESS FREE... Since we started the Houston Press, it has been defined as the free, independent voice of Houston, and we'd like to keep it that way. With local media under siege, it's more important than ever for us to rally support behind funding our local journalism. You can help by participating in our "I Support" program, allowing us to keep offering readers access to our incisive coverage of local news, food and culture with no paywalls.
Make a one-time donation today for as little as $1.