New Doc Celebrates — and Dissects — the History and Impact of MTV

MTV's famous NASA moon footage was used in promos because it was in the public domain and was free to use. The channel debuted on August 1, 1981. Graphic by Candy Kuegel/Courtesy of A&E Network
It was an idea that very few people thought would work – including many of those hired to make it happen. A 24-hour cable channel showing nothing but music videos? What the hell was that? Music was meant to be heard via the radio or a stereo. And how could a channel aimed at kids and teens be a success?

.Well, MTV silenced its doubters. It became a legitimate phenomenon that changed the path of music, pop culture, and business. On Tuesday, September 8, at 8 p.m., A&E premieres the documentary Biography: I Want My MTV, produced and directed by Tyler Measom and Patrick Waldrop.

Graphic
Early names for the channel included such, uh, sterling monikers as “TV-1,” “Round the Clock Rock,” “Audio Box” and “24 Hour Tunes” before they went simple with “MTV Music Television.” The iconic logo art was literally crumpled up at the bottom of a stack of samples. And the innovative in-house commercials promoted the idea that the channel as a whole – not the performers – was the star.

It was a scrappy operation from the start, but had a business impact still felt today. “They were really inventing the business model of cable and the whole concept of using other people’s content to sell ads long before Facebook or YouTube,” Waldrop says. “At first, the record companies thought it was absurd to give MTV this expensive content for free. Five years later, they’re trying to pay extra to ensure that their videos get on the air.”

But it still took a while for the channel to take hold as cable systems were reluctant to carry it. To watch the debut on August 1, 1981, MTV’s New York staffers had to rent a bus and drive to a dingy bar in New Jersey just to see it for themselves.

It wasn’t until decidedly old guard musicians Mick Jagger and Pete Townshend were coerced into making promos exhorting kids and teens to call their cable companies and say “I Want My MTV!” (with many other big stars falling into place after that) did the channel start to take off. It is one of modern marketing’s greatest success stories.

The iconic moon shot/landing footage was used simply because NASA video is in the public domain and thus free to use. The simple announcement “Ladies and Gentlemen…rock and roll” led to the airing of the channel’s first video, the very appropriate “Video Killed the Radio Star” by Buggles.

The doc has interviews with a bevy of early MTV execs including co-founders John Lack and Bob Pittman, and original VJs Mark Goodman and Alan Hunter. Even former Monkee Mike Nesmith – whose own videos and 1979 Popclips show was MTV’s admitted direct influence – has a say. Music superstars like Sting, Kevin Cronin of REO Speedwagon, Billy Idol, the Eurythmics, Bret Michaels of Poison, Daryl McDaniels of Run DMC, Dee Snider of Twisted Sister, Nancy Wilson of Heart, and others also about the pros and cons of the channel and their relationship to it.

MTV's iconic logo helped forged the identity of the channel as the real star.
Graphic by Lobster Studio/Courtesy of A&E Network
“It’s like someone showing you your high school yearbook picture over and over,” Cronin notes. Some acts adapted to the format much easier by a combination of looks or acting ability or style. Overseas bands like Adam Ant, Duran Duran, the Human League, Thompson Twins, and Culture Club definitely had the upper visual hand. And the channel most assuredly exposed viewers to music they would never normally hear.

“Bands from Australia, New Zealand, and the UK found it difficult to travel on tour, so they’d film these inexpensive video and ship them out,” Measom says. “They were way ahead of Americans when MTV launched as far as the making, marketing, and promotion of music videos.”

And indeed, during the ‘80s, the sheer breadth of music viewers could see on MTV in a single half hour might include the Cars, KISS, Prince, Van Halen, Wall of Voodoo, the B-52’s, and the Dire Straits. “Older” acts like Billy Joel, Don Henley, Bruce Springsteen, and Phil Collins also found a way to adapt to the new medium. It’s also noted that while at the beginning MTV played songs that were hits on the radio, soon it was the videos driving songs up the chart.


The doc doesn’t shy away from MTV’s sticky issue with race early on when very, very few black acts were played. Execs countered they were a rock channel, and mostly R&B bands like Earth, Wind, & Fire and Rick James (an early and vocal critic) wouldn’t fit the format.

Though when exec Gale Sparrow notes that James’ video for “Superfreak” could only be played in a strip club, it’s hard to square that when a few years later during the Reign of Hair Metal, many videos were actually set inside strip clubs with plenty of writhing women.

The film also includes an extremely awkward exchange when at the end of an interview, David Bowie calmly but bluntly questions VJ Mark Goodman about the channel’s dearth of black acts. Goodman stumbles over a defense about formats and audience geography while Bowie’s eviscerating look and measured response is quietly devastating (Goodman calls the impromptu moment his low point at the channel).

“Bowie used it as a master class in public discourse, and it was unfortunate that it fell on Mark Goodman to defend it, even though he didn’t make the policy,” Waldrop says. Measom adds “it took an icon – and frankly, a white person – to call MTV to task. But poor Mark Goodman! He got stuck!” 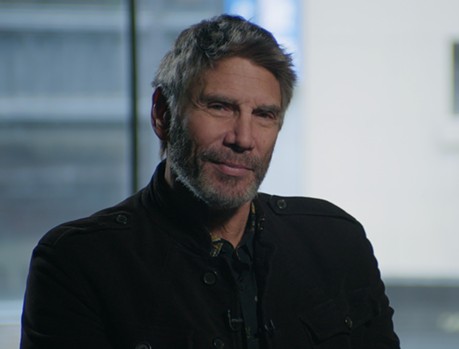 Original MTV VJ Mark Goodman was caught off-guard when David Bowie asked him to explain why the channel didn't play more black artists.
Screen still/A&E Network
Though when Michael Jackson’s Thriller videos exploded, even the staunchest defenders of the unwritten policy crumbled. MTV expected Jackson’s record company to send the clip for the rock-heavy “Beat It” complete with an Eddie Van Halen guitar solo. But what the channel got instead in a masterful bait-and-switch was the more R&B-infused “Billie Jean.” Which they had to play.

The channel would be similarly slow to embrace rap and hip hop, even though the scene was burgeoning literally outside the doors of their studio. Ironically, Yo! MTV Raps would become the most popular show on the channel and introduce the genre to millions around the world.

Toward the end of MTV’s golden era, the videos got bigger: more explosions, more hair and makeup, and more boobs. Videos like Warrant’s “Cherry Pie” or Mötley Crüe’s “Girls, Girls, Girls” and ensuing images of scantily clad women and none-too-subtle raw imagery opened up the channel to charges of sexism.

Nancy Wilson of Heart laments how she and sister Ann were severely tarted up as they squeezed into costumes and showed cleavage in what was seen as a necessary commercial move.

By 1986, the channel was a business behemoth and huge money maker. And budgets for videos (many of which now became de-facto mini-movies) exploded. These clips began to take on more significance than the music itself.

But as the original VJs were fired or quit, and the channel was sold from Warner to Viacom, the fun, early, anarchic spirit of MTV dimmed. Disparate video programming gave way to more themed shows like “Headbanger’s Ball,” “120 Minutes,” and “Club MTV.” Then came the location events for Spring Break, a game show, shows about cars and movies, and…Bevis and Butthead.

Finally, when unscripted semi-doc series with “normal” people like “The Real World” “Road Rules,” and “Teen Mom” were instant ratings triumphs, the end was near for the Music in Music Television. And the dominance of Reality TV was born.

Poison's Bret Michaels discusses how MTV allowed the band to forge a visual image that greatly helped in their success.
Screen Still/A&E Network
Today, MTV’s original Gen X audience bemoans that fact that the channel “doesn’t show videos anymore.” But should you be moved, anyone nostalgia-driven forty- or fifty-something can pull up any video from “Hot for Teacher” to “Beat It” and “Girls Just Want to Have Fun” to “Hungry Like the Wolf” on YouTube. Today’s tweens and teens get their music videos from different sources.

“You’re so lucky and spoiled. It’s all on your phone!” Devo’s Mark Mothersbaugh says, before noting how much today’s musicians are heavily influenced by MTV in their own even more groundbreaking music videos. “This is maybe the best time in history as humans to be an artist. MTV did help us get there.”

“We do miss MTV, but we also could sit and watch television for hours and hours on a Tuesday afternoon. MTV was YouTube and TikTok and Facebook and Instagram all rolled into one” Measom sums up. “And everyone has an MTV memory. Someone told me they decided to come out of the closet because they saw MTV. And now you don’t have to sit through a Kajagoogoo video to get to Madonna.”

“People feel nostalgic for their childhoods. I had a close relationship with MTV and looking at all this footage was great,” Waldrop adds. “Nostalgia’s not the same for everybody. But in this case, it meant so much to me we ended up making this movie!”

Biography: I Want My MTV premieres September 8 at on A&E Network.
KEEP THE HOUSTON PRESS FREE... Since we started the Houston Press, it has been defined as the free, independent voice of Houston, and we'd like to keep it that way. With local media under siege, it's more important than ever for us to rally support behind funding our local journalism. You can help by participating in our "I Support" program, allowing us to keep offering readers access to our incisive coverage of local news, food and culture with no paywalls.
Make a one-time donation today for as little as $1.