"Murray the K" Kaufman bowling with the Ronettes: Nedra Talley, Ronnie Spector, Estelle Bennett. Photo provided by TJL Productions/Used with Permission
Though he was a child of the ‘80s, TJ Lubinsky has old ears.

He grew up loving the music of the 1950s and 60s, be it of the doo wop, Motown, R&B, British Invasion, pop, or rock variety. At the age of 14, he came across a grainy clip on a bootleg VHS tape of the Miracles performing their hit “Ooh Baby Baby,” with lead singer Smokey Robinson emoting his romantic and emotional pain to the hilt while loosening his tie. And he had a revelation.

“I was such a nut for the Miracles, even then I thought that someday, I was going to do something with that footage, not even knowing I was going to be in television,” he says. “The Miracles really opened the door for my musical passion.” TJ Lubinsky
Photo provided by TJL Productions/Used with Permission
It turns out that clip was from a CBS Television music special called It’s What’s Happening Baby. Hosted by well-known New York DJ “Murray The K” Kaufman, it featured both live performances and early music videos from a who’s who of top singers and bands of the day performing their big hits (and – oddly – commissioned by the U.S. government as part of a youth summer job program!). It was broadcast just once, on June 28, 1965, then went into the vault to become something of a lost treasure.

Now, as the creator/producer of the long-running PBS pledge drive-affiliated “My Music” series, Lubinsky will debut a fully-restored presentation of It’s What’s Happening Baby March 6 on PBS stations across the country. And what a revelation it is for fans of the music and the performers of the era.

“We went to the Library of Congress and they had a copy, but it was unplayable. Remember, this was the days of those big 2-inch tapes,” Lubinsky offers. So he located Kaufman’s son Peter, and the two of them guided a production team which painstakingly restored the entire show using various clips and footage, minute by minute.

The list of acts reads like a Top 40 time capsule of the day and includes Ray Charles, the Drifters, the Righteous Brothers, the Supremes, the Temptations, the Four Tops, Gary Lewis and the Playboys, Dionne Warwick, the Ronettes, Marvin Gaye, Herman’s Hermits, the Miracles, Johnny Rivers, Mary Wells, Martha and the Vandellas, Patti Labelle and the Blue Belles, Chuck Jackson, and Cannibal and the Headhunters.

Emceeing the whole thing like a hip, genial uncle is New York radio DJ “Murray The K” Kaufman. With his distinctive sweaters and fedora, he was one of a group of flamboyant, over-the-top, patter spewing radio men of the day that also included “Cousin Brucie” Morrow, Jerry “The Geator with the Heater” Blavat, Wolfman Jack, and Johnny Holliday.


Many were just as well known to teen listeners as some of the acts they played (think of a real-life version of the Vince Fontaine character from Grease). Kaufman would also refer to himself with the self-anointed moniker “The Fifth Beatle” for his part in promoting the band in America, to the more than bemused chagrin of the actual group (and, possibly, George Martin!).

“Murray had taken over [rock DJ pioneer] Alan Freed’s spot on the radio, and kids adored him. Murray was different because he was a performer and part of these shows with the performers he presented. His family also had a background in vaudeville, and he just put that into rock and roll,” Lubinsky says.

The live performances filmed at the Brooklyn Fox are simply stellar. Be it Dionne Warwick’s exuberance and crowd interaction with “Walk On By,” the Imperials with some gravity-defying, lightning fast dance moves in “I’m Alright,” and the Righteous Brothers with an especially impassioned “You’ve Lost That Lovin’ Feeling," they crackle with energy. The marquee at the Brooklyn Fox for the Murray the K Easter Show, 1965.
DVD cover
On the flip side, the pre-recorded lip-synced videos have a charm of their own (and make repeated use of New York street scene and California beach locales). When the street stickball-playing Ronettes can’t charm an umpire with their own feminine wiles to “Be My Baby,” meat-packed subs do the trick.

“I was thinking ‘My God, the world loves Ronnie Spector, and this guy is more interested in stickball and sandwiches!” Lubinsky laughs. “But those [video concepts] were all Murray. Very of the time and very cool.”

Johnny Rivers literally captains a boatload of dancing beauties on “Seventh Son.” Herman’s Hermits try to win over a disapproving mother in “Mrs. Brown, You’ve Got a Lovely Daughter.” The Drifters pet pigeons “Up on the Roof.” And – in a cross-promotion for CBS - none other than Fred Gwynne decked out as Herman Munster from the TV show shows up during Cannibal and the Headhunters' “Land of 1,000 Dances” causing everyone to, um, faint upon seeing his giant, square-headed visage on the beach.

You could argue that the 48-year-old Lubinsky was born into the business and destined for it. His grandfather, Herman Lubinsky Sr., founded Savoy Records, which released music by jazz giants like Miles Davis, Charlie Parker, and Errol Garner, as well as R&B and gospel music. After moving to Pittsburgh, he began producing specials for PBS featuring live contemporary shows of rock, R&B, and doo wop acts, beginning in 1999 with Doo Wop 50. He’s also done shows with ‘70s soul, disco, folk, big band, and country pop themes. 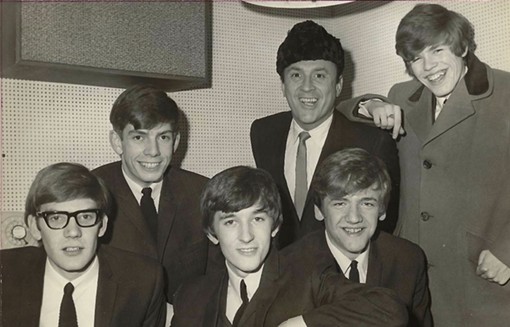 “What I talked to Otis, he remembered every detail about this show – and the Temptations only had one hit at the time, ‘The Way You Do the Things You Do.’ He said they were afraid of Little Anthony and the Imperials because of how they sang and danced, and he knew they had to step up their game,” Lubinsky says. “Then I talked to Little Anthony, and he said that they were in awe of the Temptations! And that’s a glimpse into the camaraderie of these acts. They had a lot of great affection for each other.”

The show also features the last TV interview every done with Mary Wilson of the Supremes, who died just a few weeks after visiting virtually with Lubinsky. The pair have a longer history, as Wilson has hosted several of the “My Music” specials. It also ended Lubinsky’s White Whale effort to reunite Wilson with Diana Ross on one of his shows, if only for one song or a medley of Supremes hits.

“You know, Bob, I have done these shows for basically 30 years, with a lot of the R&B and doo wop and soul artists, and a lot of them have gone to a heavenly choir now. And you expect that,” he says. “Mary was phenomenal. And she was so alive and she had all these new projects that she wanted to do. Our interview was probably an hour and a half long, talking normal friend stuff, but you only see a few minutes. It messed me up when she died so soon after.”

Today, Lubinsky hosts an oldies radio program on Twitch. And under the Umbrella of TJ Lubinsky Productions, its namesake will continue to produce programs for PBS as well as general syndication. Some upcoming projects will take the music of the past as inspiration, but feature new or unknown performers. He did that with 2018’s Doo Wop: Generations, which focused on today’s young performers rather than reunions of older lineups. He’ll also be launching a nationwide talent search for more shows in this vein.

“A lot of the original performers had moved on to heaven, and I haven’t figured out yet how to bring the ghosts on!” he says. “But Doo Wop: Generations was so successful, we have a new one coming out that goes further ahead in different genres. We want to find young kids who have the passion for the older music.”

It’s What’s Happening Baby premieres March 6 on PBS stations nationwide.
KEEP THE HOUSTON PRESS FREE... Since we started the Houston Press, it has been defined as the free, independent voice of Houston, and we'd like to keep it that way. With local media under siege, it's more important than ever for us to rally support behind funding our local journalism. You can help by participating in our "I Support" program, allowing us to keep offering readers access to our incisive coverage of local news, food and culture with no paywalls.
Make a one-time donation today for as little as $1.