On the Road with Linda Ronstadt and Young Mexican Songbirds 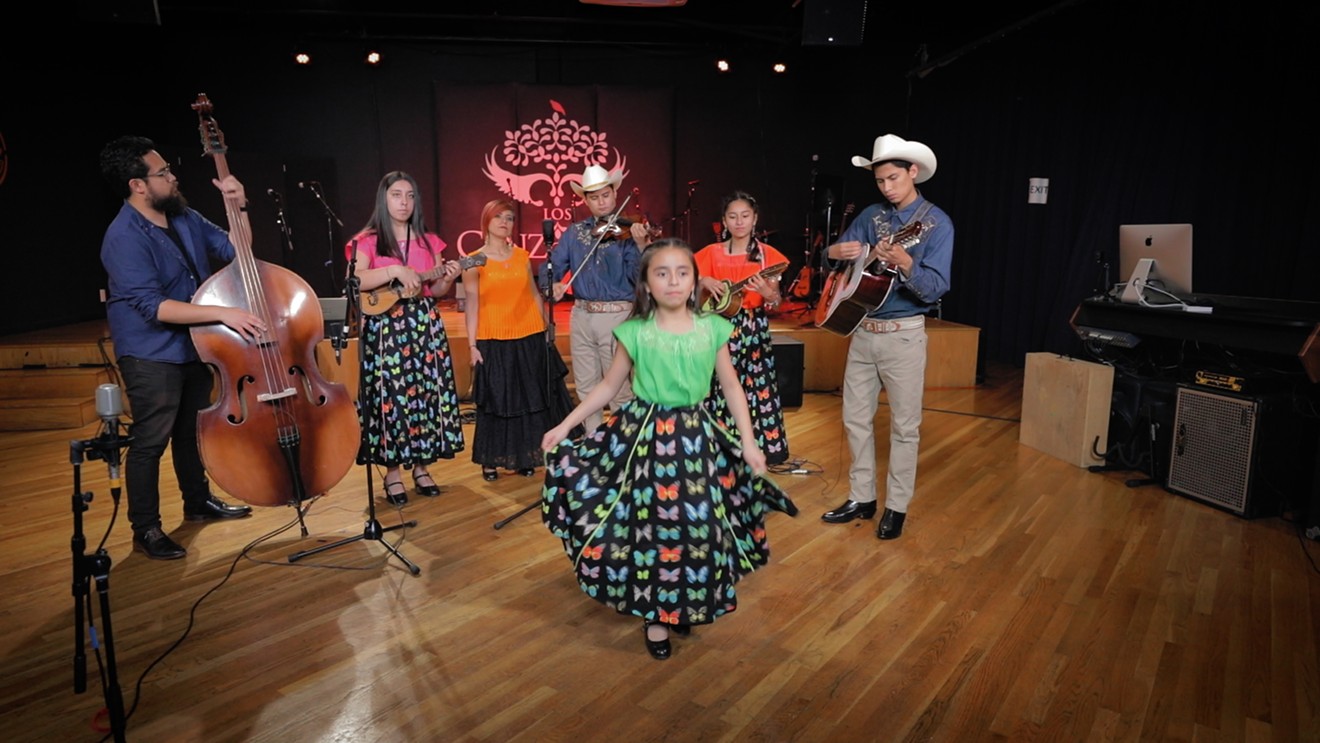 Los Cenzontles rehearse for their show in Mexico. PCH Films Production Still/Provided by Shout! Studios
Everybody thought she was crazy. I mean, she’s Linda Ronstadt. A reigning queen of rock and roll. Why the hell would she do a complete left (and right) turn and put out an album featuring her singing old Mexican songs in Spanish? And then go on tour with a full Mexican orchestra, fronting the ensemble dressed in traditional peasant dresses and smart mariachi jackets with a big red flower in her hair?

Well, despite not working on paper, 1987’s Canciones de Mi Padre was not only a smash, but Ronstadt did more Spanish-language records. It all stemmed from a simple desire she had to reconnect with her family’s roots and culture (her father was Mexican) and celebrate the songs she remembered from family singalongs. And it struck a chord with audiences who had never heard of “You’re No Good,” “It’s So Easy” or “Blue Bayou.”

Shout! Studios DVD cover
But surely, someone besides herself must have supported that decision…or at least given her encouragement?

“No, nobody did!” Ronstadt laughs. “Well, maybe a few friends a little bit, but not really. And my dad was supportive. He encouraged me to come to Tuscon for a mariachi conference, and they invited me to sing. I learned four songs to keep up with the band, and I just said ‘Let’s make a record together!’ But they had no idea who I was.”

Ronstadt made another deep connection in 1988 on a street in San Francisco. There, she caught a performance of students from the Los Cenzontles Cultural Arts Academy. Founded by Eugene Rodriguez, the community group teaches traditional Mexican art and music education to children and teens.

Ronstadt became a major patron, and that relationship and a special trip is the subject of the new documentary Linda and the Mockingbirds (Shout! Studios). “Cenzontles” translates into the name of the musical birds. The film will be available for purchase, rental, and streaming beginning October 20.

“When I [first saw] them, they had all these young kids and they were playing this regional song from Michoacán and singing in some of the indigenous languages. The thing about Mexican music is you walk down the street a block and you change culture, you change languages,” Ronstadt says.

“They’re not trained to become professional musicians unless they want to be. But I think it’s important to reconnect to your ancestors, the people who got you to where you are. And to look at that with pride,” she continues. “Because sometimes, when you come to a new culture, you have to put aside your other culture for a bit.”

Linda and the Mockingbirds is directed by James Keach, who also has a long acting resume and either directed or produced other music docs like last year’s The Sound of My Voice (about Ronstadt), and Glen Campbell: I’ll Be Me, which chronicled the singer/songwriter last tour as he struggled with Alzheimer’s. Linda Ronstadt being interviewed for the documentary.
PCH Films Production Still/Provided by Shout! Studios
He laughingly says on screen and in discussion how Ronstadt sort of “tricked” him into doing this film. A condition of her appearing in The Sound of My Voice was that Keach had to come to Mexico to talk to her there while they were filming Linda and the Mockingbirds. “We needed a current interview, and she didn’t want to do it in her San Francisco home. So I said, ‘Well, I guess I’ve got no choice!’” Keach laughs.

The documentary follows Rodriguez, Ronstadt, and Los Cenzontles—along with Ronstadt’s longtime friend and fellow Rock and Roll Hall of Famer Jackson Browne along for the ride—as they make their way across the Mexican border to the small town of Banámichi on the state of Sonora. It’s the town where Ronstadt’s grandfather grew up, and the culmination is a performance in the village plaza by Los Cenzontles and a local folkloric dance group, Grupo de Danza Xunutzi.


During the show, Keach’s camera catches Ronstadt simply enthralled by the music, in her own world and mouthing the words. The only visual evidence of her Parkinson’s disease a slight shaking of her left forearm and hand.

All the performers are dressed in colorful traditional clothes, playing traditional instruments including guitars and violins and singing with full-throated power. Two older Mockingbirds, singer/guitarist Lucina Rodriguez and singer Fabiola Trujillo, also accompany Rodriguez himself. Other footage shows Browne and Rodriguez rehearsing a song they wrote together about immigrants called “The Dreamer.”

But there’s far more to Linda and the Mockingbirds than just music. When the bus carrying Ronstadt, Browne, and the entire group cross over the border from Arizona into Mexico, there’s a palpable tension. Especially for Lucina Rodriguez, who originally came to the United States illegally with her parents. She is filmed giving memories in front of the border wall festooned with razor wire. And there was something to the timing of the trip that no one intended.

“It was the day that the Trump administration had decided to call a ‘State of Emergency’ at the border. It was [for] about three citizens shopping for groceries at night. I guess there was a lot of razor wire I guess in case one of the shoppers decided to climb the wall,” she says drily. Los Cenzontles founder Eugene Rodriguez.
PCH Films Production Still/Provided by Shout! Studios
Keach adds “I had never driven across the border before, and Donald Trump was sounding off about Mexicans and the border. I was so offended, and I knew I had to do that interview right then and there. That made [the film] not just about music, but about humanity and the soul of human beings. We’re all the same. We all want our families to be safe and have a home and belong. I didn’t set out to make a political film at all. And I’m not a bleeding heart liberal by any means.”

On the trip back, Ronstadt’s thoughts turned to another bus passenger, own three-year-old great niece.

“She was adorable, she was the pet of the tour dancing to the music. But when we got to the border, I was thinking what it would be like if we were trying to emigrate or apply for asylum and they took Annabella away from us,” she says. “It would have been horrible. We would have been beside ourselves…to put her in a cage with a bunch of other children who are crying for their mothers? But you’re in the [border agents’] power. They can do anything they want.”

Keach also inserts interviews with a couple of the performers and their families at their homes, who tell their own harrowing stories about encounters with immigration authorities and others over their Mexican heritage and identity.

One of the film’s funniest lines comes when Ronstadt is trying to explain Los Cenzontles’ take on traditional Mexican tunes and decrees “it’s not Dorito music.” On the phone, she explains. “It’s like ordering a taco salad and saying you’re going to celebrate a Mexican holiday. It’s what people [wrongly] think you culture is,” she says. 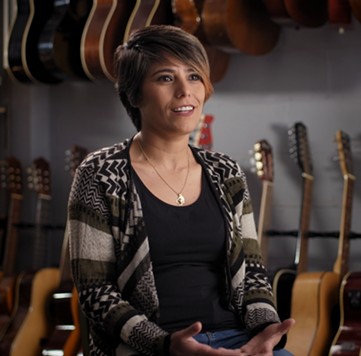 Lucina Rodriguez being interviewed about her life story and music.
PCH Films Production Still/Provided by Shout! Studios
For Keach – who spent the first decade of his life in Taft, Texas – he knows the difference on a true, uh, gut level. Really gut. “I can’t speak on it like Linda can, but I had Mexican [friends] and ate with their families. And that’s not the food you get in restaurants. South Texas was more like Mexico in those days.”

Keach has seen firsthand the exploding interest in music documentaries over the past few years. His next project is on the country band Alabama—who he offers had 41 No. 1 hits, but most people don’t know who they are.

“Music is really the soundtrack of our lives, both positive and negative, and people are interested in the people behind the music and the lyrics and the stories.”

As an aside, Keach was longtime friends with Johnny Cash. The Man in Black wanted Keach to make a film of his life. He ultimately ended up co-producing the 2005 bio flick starring Joaquin Phoenix and Reese Witherspoon, Walk the Line. “Do you know that he and June, one of their favorite places to go was Target?” he says. “They couldn’t believe how much stuff they could get there! And they knew all the people that worked there! He was bigger than life, but a really great man.”

As for her day-to-day activities now, Linda Ronstadt says that quarantine or not, the amount of change in her personal life has been limited. Although it’s clear she’ll be watching elections results pretty closely.

“I’ve had my life affected very little by [coronavirus]. I don’t go out much because of the Parkinson’s. But it’s had a tragic impact on a lot of people. But I think our lives had changed because of it. Irrevocably.”
KEEP THE HOUSTON PRESS FREE... Since we started the Houston Press, it has been defined as the free, independent voice of Houston, and we'd like to keep it that way. With local media under siege, it's more important than ever for us to rally support behind funding our local journalism. You can help by participating in our "I Support" program, allowing us to keep offering readers access to our incisive coverage of local news, food and culture with no paywalls.
Make a one-time donation today for as little as $1.