A burlesque performer oversees crewmember Laura Finical, Executive Producer Louie Comella, crewmember Jen Joiner, and Cinematographer Gracie Henley of the doc "Rockabilly Weekends." Photo by Aeon Louie/Courtesy of IVOX Media
When last we left off with Louie Comella – producer/director and head honcho of Houston’s IVOX Media studio – he was about to embark on final filming for the documentary Rockabilly Weekends: 21 Years of Viva Las Vegas.

The film tells the story of the Viva Las Vegas festival, held annually since 1998 in Las Vegas on Easter weekend. Currently held in the Orleans hotel, it is the brainchild of Tom Ingram. Ingram’s love for rockabilly music runs deep and has for decades since his days as a DJ and concert booker in his native home of England, before crossing the pond to the United States. 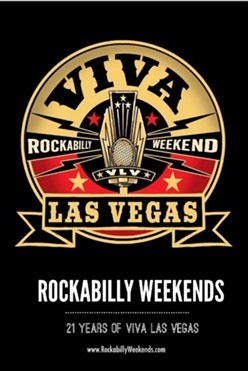 Movie Poster/Courtesy of Big Brand Films
And according to the film, more than a million people from 22 countries have attended Viva Las Vegas since 1998, as it’s grown to become the epicenter for rockabilly culture in the world.

But a funny thing happened in the ensuing years. While VLV was originally envisioned as a mostly musical showcase for both original ‘50s-era rockabilly artists like Jerry Lee Lewis, Wanda Jackson, Little Richard, Sonny Burgess and Dick Dale – along with more modern practitioners like the Reverend Horton Heat, Big Sandy and his Fly-Rite Boys, and Brian Setzer – other parts of the culture began to explode as well.

That means the film covers not just the music of VLV with performances and interviews, but the fashion, the cars, the dancing, the tattoos, pool parties, and the burlesque aspects as well. Comella showed a rough cut of the doc at the most recent VLV event (always on Easter weekend), along with a Q&A. The documentary is produced under the umbrella of Big Brand Films, created by Comella with cinematographer Gracie Henley.

“We had never planned to screen it for an audience, but Tom wanted to do it in one of the showrooms,” Comella says over the phone from a commercial shoot in Seattle. “It was kind of last minute. But the place was packed, about 600 people saw it. I first went to Viva Las Vegas in 1999, and it was hard to take 21 years and condense it into an hour!”

In fact, the experience has provided a bounty of riches that has Comella going in several different directions. He’s finalizing a cut of the film that runs at just under an hour for streaming services and video on demand platforms (though he says he can’t talk about two competing distribution deals he has in the works yet). Another version at 75 minutes will include more musician interviews for film festivals and movie theaters. And if all goes well, a Blu-ray home DVD release will add another 30 minutes of bonus footage.

He’s also cutting together standalone programs on different aspects of VLV with titles like Radio Dolls, Comedy Briefs, Car Show Classics (the most recent VLV boasted more than 1,200 vintage cars). But the one that will definitely appear on screens first (Comella says a deal is “definitely in place” and will be announced soon) is the limited series Modern Burlesque, which follows the performers, clothing, and routines of VLV’s contemporary burlesque show.


“The burlesque portion has just exploded. But people are coming for all the different elements. There is a whole culture that’s involved, and it’s more than just music. There’s even a bowling tournament with a $50,000 prize,” Comella offers. “The first few Viva Las Vegases had old school rockabilly headline acts. Some of them have passed on and in a few more years we won’t have anybody from Sun Records left. So it’s become a showcase for newer bands from around the world.”

According to Ingram in the film, he receives “hundreds” of applications from rockabilly bands all over the world to perform at the festival. He may also invite a band to perform after simply trolling YouTube for video clips. And Comella notes that Ingram has given him pretty much free rein to film as he pleases, and the partnership has been solid.

“He’s all for it and letting me do what I want and welcomes it. He sees it as exposure of the culture and the event,” he says, before professing amazement at the entire picture. “When I was a kid, people weren’t walking around with sleeve tattoos dressed like the ‘50s. It’s become a whole scene and culture, and I hope this film really gets that aspect across.”

For more on the film, visit RockabillyWeekends.com
KEEP THE HOUSTON PRESS FREE... Since we started the Houston Press, it has been defined as the free, independent voice of Houston, and we'd like to keep it that way. With local media under siege, it's more important than ever for us to rally support behind funding our local journalism. You can help by participating in our "I Support" program, allowing us to keep offering readers access to our incisive coverage of local news, food and culture with no paywalls.
Make a one-time donation today for as little as $1.