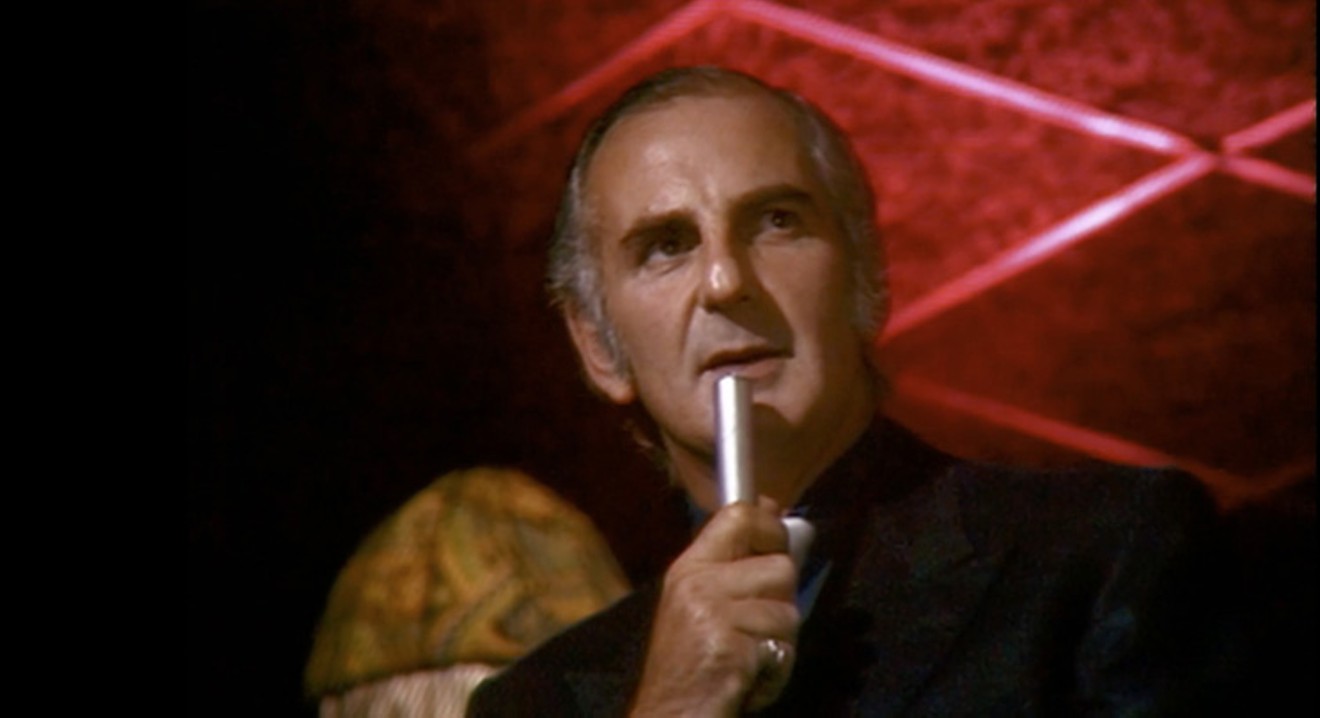 Ronnie Scott introduces an act at the legendary London jazz club that bears his name. screen grab
“Only really an idiot would really go into the jazz club business. Let’s face it.” – Ronnie Scott

For more than six decades, jazz fans have flocked to London’s Soho District with one destination in mind: to glide through the small, nondescript door of Ronnie Scott’s Jazz Club. Since its opening in 1959, most of the greats of the genre have graced its stage. And though the pandemic has (as in all live music clubs) adversely affected the 200-seat venue, it’s still in operation today.

movie poster
But less is known—especially to those outside of London—about the actual man whose name graces the awning and who with partner Pete King founded, managed, and ran the venue.

English Writer/Director Oliver Murray (who also helmed The Quiet One about Rolling Stones bassist Bill Wyman) brilliantly merges the story of the man and the venue with the documentary Ronnie’s (Greenwich Entertainment). It will be available for streaming and play in select U.S. theaters beginning February 11.

“Working in the film industry in Soho, I walked past that place every day. And when Eric Woollard-White, the producer, asked me if I’d be interested in making a film,” Murray says via Zoom from England. “And I thought I would be the audience for this. I’m not a jazz nut, but it was the perfect opportunity to uncover the man behind the name.”

Born in 1927, Ronnie Scott was a tenor jazz saxophonist of some renown in Britain, having already played clubs since he was a teen. And like so many contemporaries, fell under the spell of bebop and in particular saxophonist Charlie Parker.

English musicians would often secure a gig playing on the Queen Mary in the ship’s orchestra on journeys to and from New York. It paid for their passage but—more importantly—gave the eager acolytes access to all those jazz clubs based around New York’s storied 52nd street. There, the awestruck players would be able to sit only feet away from icons that had previously only stared out at them from album covers.

In the 1950s, Ronnie Scott both played with and led his own ensembles and orchestras. But he yearned to recreate something like the experience he had in New York. So, with bandmate-turned-business-manager Pete King, they opened Ronnie Scott’s Jazz Club with zero prior experience. And hey, they served food.
“He had a really clear vision of what he wanted. He was creating a bit of New York in London where people could play the music they wanted to play. There was no financial component to his thinking,” Murray says. “And he wanted to create a hangout for himself and his friends. The music came first, above business. Even when the business was bad. It’s actually amazing it’s been around so long, because by rights it shouldn’t be.”

Ronnie’s features scores of voice over interviews with Scott’s associates, friends, family, and musicians like Sonny Rollins and Quincy Jones, who all speak glowingly. There’s also plenty of video footage of Scott himself in various appearances on interviews and talk shows.

Sonny Rollins at Ronnie Scott's.
screen grab
But for the jazz fan, the jewels of the documentary come in the snippets of rarely-seen performances recorded on the club’s stage mostly in the late ‘60s and early ‘70s. Live again are a pantheon of jazz greats including Dizzy Gillespie, Roland Kirk, Miles Davis, Buddy Rich, Sarah Vaughan, Nina Simone, Ella Fitzgerald, Van Morrison with Chet Baker, Zoot Sims and Sonny Rollins.

During the time, the musician’s unions in the U.S. and England had something of an exchange program (“one of ours go there, one of theirs comes here”). And Scott vigorously sought to have the cream of the crop of Americans over. They sometimes played residences that could last a month to rapt audiences who knew and truly appreciated the material and the men and women who performed it.

Murray had access to the vast BBC archives, but finding the live concert footage was something of a challenge at times.

“I kind of stood on the shoulders of [the original videographers] and we did a huge restoration on the music. Some of it was on the knife-edge of being unlistenable,” Murray says. “The archives were huge and old. Sometimes, [the tape boxes] would just be labeled something like ‘Jazz Man at Ronnie’s.’ And they hadn’t been pulled off the shelf for a long, long time.”

There’s also restored sound for part of the show when Jimi Hendrix jumped onstage to jam with Eric Burdon and WAR in 1970, as taped on a cheap cassette by fan Bill Baker. It was the last public performance from Hendrix, who would die two days later.

Ronnie’s also goes into detail about the darker and more troubled aspects of Ronnie Scott’s life. Prone to severe mental depression for decades, he also had issues with gambling, alcohol and pills.

Writer/Director Oliver Murray.
Zoom screen grab
One raw clip shows Scott, stranding offstage waiting to introduce and act but unaware he’s being filmed, clearly struggling with something exasperating and horrible in his head. That black cloud would disappear as soon as he jumped onstage to emcee with often well-worn jokes and stories.

“Ronnie was what he needed to be to the various people in his life. But he’s an old school jazz man. I kept coming back to the phrase that music was the medicine for his troubles. He quite literally needed it for his own mental health,” Murray offers.

“In those days in that tough, male world of jazz and late-night Soho clubs, people would say ‘Oh, Ronnie’s having a dark moment. Someone buy him a drink!’ So, the place he needed to be at was probably the place he shouldn’t be hanging out in. He loved it, but he lost a lot of himself at the same time. It’s a tricky story. And it’s a mental health issue.”

When a botched dental procedure made it very painful or impossible for him to play any longer, Scott grew even more down despite the concern of his wife and a daughter (and another romantic “partner” interviewed).

Ella Fitzgerald at Ronnie Scott's.
screen grab
He was prescribed barbiturate painkillers while recovering from tooth implant surgery and died from an overdose in 1996 at the age of 69. The documentary leaves open to interpretation whether it was intentional or not.

Many thought Scott’s death would signal the end of the club, but the infusion of new and committed owners and managers, a physical refurbishment, and a booking schedule that embraced a wider scope of what’s considered “jazz” brought it back.

“To run Ronnie Scott’s, you have to understand the legacy,” says current Managing Director Simon Cooke. “Why it was started, what the ethos was of the founder of the club. It is a national institution; it is a responsibility.” That said, is it also a business, and current management is steering it away from being a “museum.” Which is cause for some carping from the English jazz cognoscenti.

Considering the pandemic and how it’s wreaked havoc on the live music industry in the areas of both touring and nightclubs, Murray says he’s been thinking deeper about the role of venues like Ronnie Scott’s. What they’ve meant in the past to audiences, and what it means going forward.

“Everybody’s got a Ronnie Scott’s somewhere in their lives. A club to hear music that is very important to them,” he sums up. “I think Ronnie’s will be there forever, even if the industry shrinks around it. Out of the ashes of not being able to leave our homes with people locked up learning to play instruments will come a whole generation of incredibly talented creatives.”

For more on Ronnie’s and Murray, visit OllieMurray.com
KEEP THE HOUSTON PRESS FREE... Since we started the Houston Press, it has been defined as the free, independent voice of Houston, and we'd like to keep it that way. With local media under siege, it's more important than ever for us to rally support behind funding our local journalism. You can help by participating in our "I Support" program, allowing us to keep offering readers access to our incisive coverage of local news, food and culture with no paywalls.
Make a one-time donation today for as little as $1.