When most people think of PBS programming, shows featuring 18th century English castles and tea rooms, home improvement, quilting, and cooking programs, or Ken Burns documentary rotoscope fiestas come to mind. But this month, good viewers of public television will see something a bit different as an enticement during Pledge Drive – a full on rock and roll concert by the Doobie Brothers.

Rhino Records CD/DVD cover
The network will screen Live from the Beacon Theatre, which features first-to-last-track performances of the band’s two breakthrough albums, 1972’s Toulouse Street and 1973’s The Captain and Me, along with selected other hits. When asked if he ever thought he’d see the partnership that pairs PBS with the Doobies, founding singer/guitarist Tom Johnston is succinct.

“Ah….no!” he laughs. “We’ve played a lot of fundraiser shows, but not been part of something like this. We’re still working away!”

A 2CD/1 DVD set from Rhino will also go on sale June 28, and the Doobies will trek out on a summer tour opening for Santana that beginning June 20 in Irvine, California and making a stop in Houston July 7 at the Woodlands Pavilion.

As to why the band chose to play their second and third albums in full – something that’s become increasingly popular for classic rock bands, but the Doobies had never attempted before – it’s because they were pivotal releases. First in establishing the band on a national scale, and then catapulting them higher. Not that Johnston and co-founding singer/guitarist Patrick Simmons were feeling any sophomore pressure at the time.

“We were just trying to make the best album we could. Nobody really thought about that ‘make or break’ situations in those days,” he says. “We’d already done one album that didn't get anywhere [the 1971 debut The Doobie Brothers], but it took Toulouse Street and the song ‘Listen to the Music’ to do something for us.”

Like “Listen to the Music” – their signature tune – tracks from those two albums have likely figured into most shows the band has played since their original release: “Rockin’ Down the Highway,” “Jesus is Just Alright” “Long Train Runnin’,” “China Grove,” and even “South City Midnight Lady.”


But other songs like “Mamaloi,” “The Captain and Me,” “Cotton Mouth,” “Ukiah” and a few others, the band has never played on stage before. So Johnston, Simmons, and the rest of the current band including multi-instrumentalist John McFee (the other principal member, a Doobie since 1979), Bill Payne (keyboards), Marc Russo (sax), Ed Toth (drums), John Cowan (bass/vocals), and Marc Quinones (percussion) had to reconsider the material from scratch.

“Yes! [Patrick and I] had to completely relearn them!” Johnston laughs. “Some of them are more complex songs with a lot of lyrics and a lot of picking. We spent seven days in Nashville just working to get it all together. And then doing them in order on the albums, that was the first time we’d done that. It’s not how you’d sequence songs for a normal set, so we’d go up and down in the intensity of the songs from rock and roll to laid back. That was an interesting thing to do.”

For the Beacon show, the Doobies also added a couple of extra horn players to beef up the sound (Roger Rosenberg on sax, Michael Leonhart on trumpet), which Johnston says really added a lot to tunes like “Cotton Mouth” and “Dark Eyed Cajun Lady.” "It really sounds sweet with those guys playing!” he enthuses. And while the Doobies had used the Memphis Horns on a couple of ‘70s tours, and recorded with a horn section for a 2004 DVD at Wolf Trap, it was still a rare move. 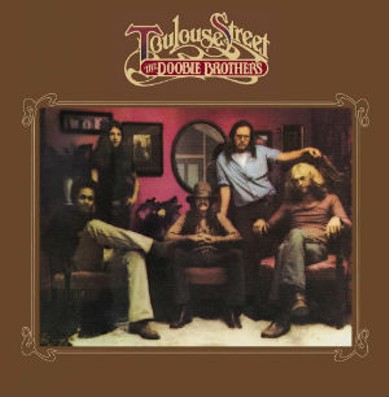 The cover of 1972's Toulouse Street - shot in a former New Orleans bordello - featured the then lineup Tiran Porter, Patrick Simmons, Tom Johnston (seated), John Hartman, and Michael Hossack.
Warner Brothers album cover
Live from the Beacon Theatre – like their live shows – also showcases a lot of what can be called the “Tom Johnston Air Punch,” something he does onstage when he’s especially pleased. It’s an extension of the genuine enthusiasm and affection he has for live performances, but says it’s not possible without one crucial ingredient.

“The biggest thing is the crowd. For us, it always has been that since we started, to try and get the crowd up and moving with us,” he says. “The interaction between the crowd and the band is really paramount. And also the pleasure of playing a song really well, not matter how many times you’ve played it.”

Increasingly, that crowd he sees has younger faces as older fans bring their kids and even grandkids out to shows. Johnston says it’s hard to make them out in the audience from the stage, but he sees a lot of them at meet and greets and doesn’t take them for granted.

And while rock (and general music) history has long promoted the line of thought that you’re not supposed to like your parent’s music, classic rock has disintegrated that idea (my own 15-year-old son, Vincent “The Classic Rock Kid” Ruggiero’s two favorite two bands are the Eagles and the Doobie Brothers).

As mentioned, the Doobies will be hitting the road this summer opening for Santana, and Johnston says that while he and Simmons don’t really hang out with Carlos Santana, they have known him for decades and shared stages with him a couple of years ago while on another tour in Australia and New Zealand.

Santana has a new full-length CD coming out titled Africa Speaks. The Doobie Brothers are working on new music as well – Johnston says the songs are completed and in the mixing stages, and this will be their first new material since 2014’s Southbound. It’s coming out as an as-yet-untitled EP, though, and there’s a reason for that. John McFee, Tom Johnston, and Patrick Simmons
Photo by Andrew Macpherson/Courtesy of the Richlynn Group
“It’s not a full album because people don’t buy albums anymore. Say you do 10 or 11 songs, you’re throwing away 5 or 6 of them. People are downloading just the songs they want to hear, and they may not all even make it to streaming,” he says.

“Things have changed drastically. I’m sure Taylor Swift and Ed Sheeran could sell CDs and go gold, but that’s about it. Most people can’t do that because today people would rather listen to playlists.”

Finally, what many, many fans would also like to hear is the Doobie Brothers playing live…at their induction ceremony for the Rock and Roll Hall of Fame.

Though they’ve been eligible since 1996, have a double CD worth of hits and big selling records, and still tour extensively, the Doobie Brothers have shockingly never even been on the ballot for consideration for potential induction (and are No. 1 on this writer’s list of unconscionable snubs – don’t get me started).

Recent times have seen more classic rock-era acts like Chicago, Yes, the Moody Blues, Journey, and others enshrined. A few years ago, the Doobies switched management to the storied and super powerful Irving Azoff, who either personally or through his company also handles the Eagles, Fleetwood Mac, Steely Dan, and others. Azoff himself ranked No. 4 last year on Billboard’s “Power 100” list for the music industry.

For his part, Johnston is biding his time. Still.

“We’ve talked about [the Hall of Fame], but not a lot because it’s kind of pointless. And it’s political thing and one of the reasons….nah, I’m not gonna go there!” he says. “When it’s supposed to happen, it will happen, that’s how I look at it. There’s other people that are shocking who aren’t in there. It is who you know, and I think you’re right, having changed management to Azoff and Company might help. But I don’t want to jinx it!”

Live at the Beacon Theatre comes out June 28. Santana and the Doobie Brothers play July 7, 7 p.m., at the Cynthia Woods Mitchell Pavilion, 2005 Lake Robbins Drive.  For information, call 281-364-3010 or visit WoodlandsCenter.org. $47 and up.
For more on the Doobie Brothers, visit TheDoobieBrothers.com
KEEP THE HOUSTON PRESS FREE... Since we started the Houston Press, it has been defined as the free, independent voice of Houston, and we'd like to keep it that way. With local media under siege, it's more important than ever for us to rally support behind funding our local journalism. You can help by participating in our "I Support" program, allowing us to keep offering readers access to our incisive coverage of local news, food and culture with no paywalls.
Make a one-time donation today for as little as $1.