How the San Francisco Area Speeded the Sowing of Thrash Metal

Steve Souza and Tom Hunting of Exodus remember the beginnings of the thrash metal scene in the San Francisco Bay Area. Screen Grab/MetalRock Films
Maybe it was something in the water, but the San Francisco Bay Area certainly produced a lot of Titans of the Thrash Metal scene. Of the “Big Four” (Metallica, Megadeth, Slayer, Anthrax), the first two had their careers catch fire there. And if you expanded it to a “Big Six” with Exodus and Testament, there’s two more.

That’s what Bob Nalbandian certainly thinks. As the Director of the Inside Metal series of documentaries, he turns his attention (and lens) to the sonic landscape of the Golden Gate Bridge with his latest, Bay Area Godfathers (MetalRock Films). It will be available beginning October 6 for purchase, rental, and streaming across multiple platforms. 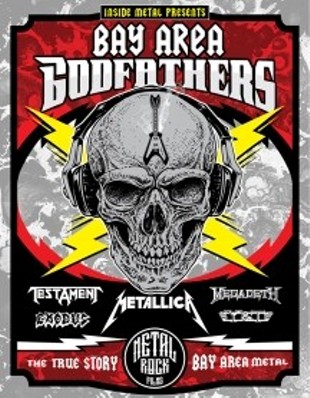 DVD cover/MetalRock Films
“The Bay Area thrash scene kind of started when Metallica came up from L.A. I had seen them there when [original, but short-lived members] Dave Mustaine [who would form Megadeth] and Ron McGovney were still in the band. When they moved to San Francisco, that’s when things changed,” Nalbandian says (even if a couple of his interview subjects say it pre-dated Metallica’s bloody flag planting).

“The clubs and the venues there would also take on more of the thrash bands than the L.A. clubs, who didn’t want the slam dancing and the stage diving,” he continues. “The Bay Area clubs were more receptive to the music and the crowds going crazy. I think people are also more open minded there, especially with music.”

Bay Area Godfathers features photos, videos, and ephemera from bands of the era, but it’s really a Talking Head documentary, along the lines of the first three in the Inside Metal series spotlighting other genres and locations. In fact, the idea one sprang out of one of those.

“We did interviews for the documentary on the L.A. thrash scene, a lot of the bands talked about going up to the Bay Area and how they were so receptive to them. And I love the metal bands there, so this became our fourth title,” Nalbandian says.

As the film shows, the scene was initially inspired by the fast-paced sounds of New Wave of British Heavy Metal Bands like Motörhead, Saxon, Iron Maiden, Judas Priest, and Angel Witch. And how they in turn inspired groups like the Big Six, Death Angel, and Y & T to speed things up even more. The film spotlights lesser-known Bay Area bands like Earth Quake, Vicious Rumors, The Horde of Torment, Harvey, Broken Man, Damajj, Violation, and Stone Vengeance—the last act a rarity in that its members were all black.

And while there are comments from some bigger names in thrash, including Lars Ulrich (Metallica), Dave Meniketti (Y&T), David Ellefson (Megadeth), Dave Lombardo (Slayer, Suicidal Tendencies), and Eric Peterson (Testament), they are brief—though Steve Souza and Tom Hunting of Exodus have a bit more screen time.

The bulk of remembrances come from lesser-known band members, record store owners, club promoters, DJ, and journalists who were actually there. And whose memories are no less important (and in some ways, even more insightful). Nalbandian says that part of the reason is that they weren’t touring the country or the world like the more famous bands, so they kept it local.


“I’ve noticed that, and they might have an even better memory of the scene. And they have some of the best stories,” he says. “Some of them were huge at the time in the area, and they made their own mark, even in Europe. I think having the smaller acts interviewed makes it a more well-rounded documentary.”

Bay Area Godfathers also shows how outside of the bands and the regular chain of live music clubs, there were low-budget fanzines, radio station programs, and record stores for those-in-the-know that cultivated and promoted the thrash scene in a way that’s unimaginable in today’s music biz climate.

Fanzines like Metal Mania, Metal Rendezvous, and Nalbandian’s own L.A.-based The Headbanger were often the first (or only) media outlets covering the band and the music. “I’m 55, so I grew up in that scene and remember trading tapes and having pen pals who were into the music. And radio station KUSF really played these bands, plus certain [record stores] were known to carry the music.”

At one point, Nalbandian says that Metal Rendezvous was printing 120,000 copies per issue for U.S. and European distribution, putting it on the level with more mainstream music magazines like Hit Parader. Europe had their own ‘zines with Metal Forces and Kerrang!

Lars Ulrich of Metallica, the best known-exporter of thrash metal, whose career took off in the San Francisco Bay Area.
Screen Grab/MetalRock Films
He also remembers fondly how the bands in the Bay Area – unlike those in Los Angeles – had a sense of unity and support for each other, and with little or no walls between a guitar player and a kid who was happily moshing away.

“That’s the Bay Area mentality. It was a more unified scene, especially when it came to business. And it wasn’t just about thrash. The band Vain was even glammier than the hair metal bands in L.A.! But [frontman] Davy Vain produced the first couple of Death Angel albums,” Nalbandian says.

Of course, thrash metal was far removed from the more hippie/psychedelic music the city was known for in the ‘60s like the Grateful Dead, Jefferson Airplane, and Quicksilver Messenger Services. Or even more mainstream rock acts that emerged like Sammy Hagar, Eddie Money, and Huey Lewis.

The doc definitely has a modest-budget look. There’s no artful editing or photo graphics or – significantly – much actual music, likely due to the cost of acquiring sync rights. But in a way, Bay Area Godfathers reflects the scrappy, DIY culture of the scene it’s profiling.

Nalbandian amassed so much material, that he’s already working on Bay Area Godfathers Part 2, which he says will cover a later period when thrash broke wider, and hopes to have it out in early 2021. “We get into the debauchery a little more, the nitty gritty of the scene,” he says. “But also the camaraderie…and the competition.”
KEEP THE HOUSTON PRESS FREE... Since we started the Houston Press, it has been defined as the free, independent voice of Houston, and we'd like to keep it that way. With local media under siege, it's more important than ever for us to rally support behind funding our local journalism. You can help by participating in our "I Support" program, allowing us to keep offering readers access to our incisive coverage of local news, food and culture with no paywalls.
Make a one-time donation today for as little as $1.