The story of ZZ Top is told mostly on-camera by the three men themselves in recently-conducted interviews, aided by a treasure trove of vintage photographs and live footage. All three prove able raconteurs, even if they’ve told these stories over and over. Musicians like Steve Miller, Dan Auerbach (the Black Keys), and Josh Homme (Queens of the Stone Age), and several producers and engineers add their talking head thoughts. 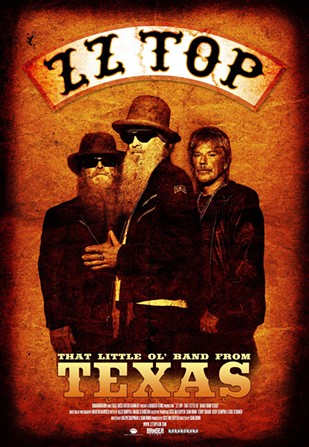 DVD cover
As to how they got their name, Gibbons recalls after leaving his Houston band the Moving Sidewalks (who made the garage rock classic “99th Floor”), he was aware of a number of artists with double consonants in their names like B.B. King and Z.Z. Hill.

After considering dubbing the group ZZ King, he noticed that the revered bluesman’s name was at the top of a concert hand bill. Thus, ZZ Top was born – though briefly with two other players before Hill and Beard joined.

While their early music was blues-based, they weren’t a blues band by any means. Their first producer, Robin Hood Brians, offers that “they turned blues into party music.” And when a producer of an early ‘70s Memphis Blues Festival booked them based simply on the music, he was shocked to find out they were white. Nevertheless, the band shared the stage with Muddy Waters, Freddie King, and fellow Houstonian Lightnin’ Hopkins.

Much is made of how promoters, disc jockeys, executives, and even audiences didn’t quite know what to make of the group that looked like a country band and were stubbornly “Texas.” To drive home the point, ZZ Top toured the infamous 1976/77 “World Wide Texas Tour,” which found the band sharing their stage with Lone Star State décor and all sorts of live animals including a buffalo, longhorn steer, rattlesnakes, and a buzzard.

As the buzzard was placed on a perch behind the drum kit, he remembers the animal getting agitated when Beard would play a slow blues and barely move. The drummer says he's be sure to make big swirls with his arms every so often—so as not to give his feathered friend the impression that he was dead and ripe for a concert snack. Actor/musician Billy Bob Thornton calls the tour equal parts “rodeo, circus, and rock show.”

ZZ Top took a break of several years after that – instigated by Beard’s successful rehab stint to kick a massive cocaine and heroin habit (upon receiving his first big check for $72,000 – about $327,000 today – he says he blew the whole thing on drugs).

But when the band reconvened with a new record company, they discovered two things: None of them had bothered to shave for a very, very long time (though ironically, it would be Beard who would soon shear his off), and that this new channel called MTV had appeared.


Thus began ZZ Top’s renaissance and road to massive sales and concert crowds, buoyed by a string of clever videos in which they appeared in supportive roles as otherworldly angels sent to help out young lovebirds amidst a flurry of hot girls and a distinctive red hot rod. With their hats, ever-present sunglasses, and long beards, ZZ Top became almost cartoonish. But their more pop-based songs like “Gimme All You Lovin’” “Legs,” and “Sharp Dressed Man” found a massive audience, and their 1984 album Eliminator sold 15 million copies.

There are a few weaknesses in the documentary. The story strangely ends with the worldwide success of Eliminator, with no mention of the past nearly 35 years of the band’s career. Their Super Bowl performance and Rock and Roll Hall of Fame induction are represented by one still photograph each.

Also conspicuously missing is any video of longtime manager Bill Ham, though anecdotes about him are brought to life in pretty funny animation. This includes a tale Hill tells when, while in Hawaii opening for the Rolling Stones, he and Beard ran up a huge hotel bar tab. Ham limits them to “two drinks a night.” The pair abide by that rule, but order a special drink whose container is several feet tall.

ZZ Top: That Little Ol’ Band From Texas is available now on Netflix, but fans will want to spring for the DVD as the bonus footage includes 35 minutes of live material both filmed recently at Gruene Hall and vintage 1976 and 1981 footage from Ham’s archive.
KEEP THE HOUSTON PRESS FREE... Since we started the Houston Press, it has been defined as the free, independent voice of Houston, and we'd like to keep it that way. With local media under siege, it's more important than ever for us to rally support behind funding our local journalism. You can help by participating in our "I Support" program, allowing us to keep offering readers access to our incisive coverage of local news, food and culture with no paywalls.
Make a one-time donation today for as little as $1.