Live Music Returns To Under The Volcano 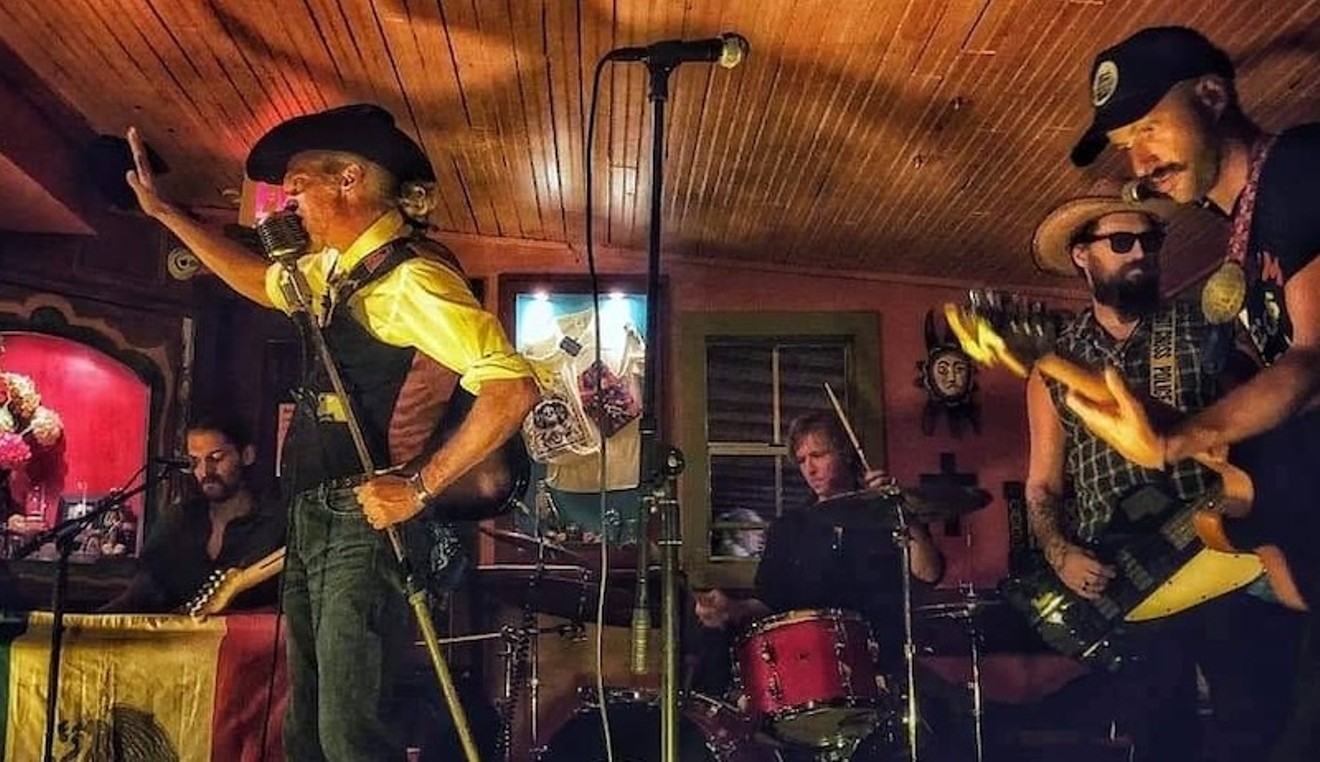 Jimbo Mathus previously performing at the cozy venue which will is celebrating the return of live music with performances every Wednesday. Photo by David Jackson
The name Under the Volcano may conjure up the desperate and dark sentiments from the classic Lowry novel by the same name but one look inside this Houston bar and all thoughts of demise dissipate under the curious stares of the many masks the line the walls and the warm low ceilings.

Opened in 1989, Under The Volcano was initially set up to be a Day of The Dead centered bar and restaurant where owners Pete and Vera Mitchell decorated the space with items brought from Mexico and focused on fresh made cocktails and food.

Under The Volcano didn’t set out to be a music venue but for the past 15 years they have hosted an impressive array of artists for weekly shows bringing in national acts while also celebrating local talent. After pausing their live performances due to the COVID-19 pandemic, Under The Volcano is back to hosting live bands every Wednesday.

“In a way it was interesting because we had to look at the place in new ways,” says Pete Mitchell of their time during the shutdown where they offered to go food and drinks and patrons could often be found sitting around the parking lot enjoying their fresh fruit cocktails.

Mitchell also took the time to finally add empanadas to the menu bringing the dough all the way from Argentina and making the filling in house. Mitchell describes how they tried to start up live shows last year before Delta reared its ugly head and they decided to pause again.

“We had a really packed show with The Hickoids and around that same time other clubs had been hit hard with outbreaks and so we just shut it down.”

It was this July that Mitchell describes getting a “kick in the ass” to return to hosting shows by his old friend and showman extraordinaire Kevin Russell of Shinyribs, a band birthed at Under the Volcano as the former Gourds frontman found a safe space to explore new sounds in the small room.

Mitchell started slow and steady in July and since then has hosted successful weekly shows by artists ranging from Austin’s The Rubilators to Houston’s Kelly Doyle and Ancient Cat Society.

The month of September keeps the good times rolling with a special Sunday, September 4 performance by Tav Falco followed by the regular series including Vernon Trumbull and His Kinsmen, Houston’s Mark Riddell, Under the Volcano’s 33rd anniversary celebration and Chris Ruest at the end of the month.

Mitchell’s love for music in a wide variety of genres combined with the layout of the bar makes Under the Volcano stand out among our city’s venues as a place where one never knows exactly what kind of show they may see there or who they may spot in the crowd.

The small stage is surrounded by church pews on one side and the standing room space around the bar on the other creating a split room which can be part listening room, part dance floor depending on the act and the vibe.

Throughout the years, Under the Volcano has served as a great place for bands to try something different and experiment with new set ups as they play to smaller crowds. The venue also creates the perfect opportunity for artists to break away from their full band and offer up rare, solo performances, something Kevin Russell and Jimbo Mathus of Squirrel Nut Zippers have done in the past.

The venue has consistently hosted a balance of local acts and out of towners always bands with original music. They also plan to return to their previous set up of hosting DJ nights where local musicians come spin their favorite songs and hangout with the crowd. Having shows on Wednesdays also allows for the usually busy musicians to try something new on a rare day off or catch a performance.

Mitchell takes it upon himself to create the venue's small posters with recognizable fonts and his pension for nailing a description of the band in four words or less using the posters hung on the columns around the bar to give the crowd friendly reminders of which bands they should be quieter for and the ones that encourage dancing.

“I found that's the nicest way because a lot of times people don’t know. They're just not aware and they think at any bar you can talk how you want but here it's a little different sometimes,” says Mitchell.

When Mitchell first began running Under the Volcano, hosting live music was something he wanted to explore but initially reserved for special occasions and private parties. He started with a monthly residency with Rebirth Brass Band which led to Kevin Russel reaching out about his solo work.

Before long other artists reached out and former Houston musician current Marfa resident and politician, David Beebe gifted Mitchell a PA system leading to the weekly shows. Mitchell is happy to have music return to his special space but admits that hosting the shows is not without its challenges.

“I have so much respect for Mucky Duck, The Continental and The Heights Theater because it's not easy. It’s hard to be a cheerleader for stuff that people are turning a blind eye to even though it’s great. It’s still fun for me to do it and I think I would get burned out if I had to do it all the time.”

Under the Volcano hosts live music every Wednesday, 2349 Bissonnet, 8 p.m., $10.
KEEP THE HOUSTON PRESS FREE... Since we started the Houston Press, it has been defined as the free, independent voice of Houston, and we'd like to keep it that way. With local media under siege, it's more important than ever for us to rally support behind funding our local journalism. You can help by participating in our "I Support" program, allowing us to keep offering readers access to our incisive coverage of local news, food and culture with no paywalls.
Make a one-time donation today for as little as $1.