Wilco's Jeff Tweedy at Revention Music Center in October 2019 Photo by Eric Sauseda
After footage of Bow Wow performing at a Houston nightclub went viral on Twitter over the weekend, Mayor Sylvester Turner made his feelings about live music perfectly clear... 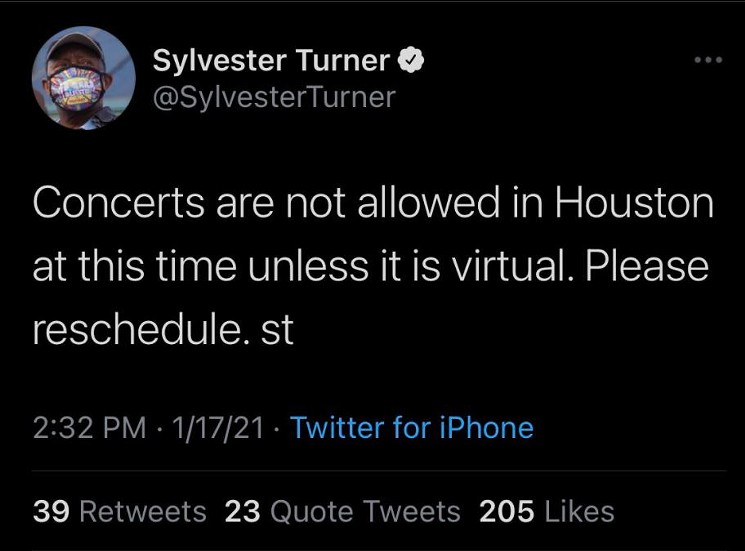 Sceenshot via Twitter
The mayor later deleted the tweet, but his sentiment didn't change (even after he and Bow Wow made nice online). That being the case, we have compiled another round of streaming concerts worth checking out while we all hunker down this week.

Frank Turner
Live-Streaming – 21 January
After his post-hardcore outfit Million Dead disbanded in 2005, vocalist Frank Turner decided to try his hand at folk-punk. Eight solo albums, five EPs and a split record later, the English singer-songwriter has cemented himself as an acoustic-leaning solo artist, having been compared to the likes of Billy Bragg and even Bruce Springsteen. Turner is scheduled to live-stream a performance tomorrow night, and proceeds from the show will benefit a national initiative aimed at preventing the permanent closure of music venues because of the COVID-19 pandemic.

Ron Pope
Live-Streaming – 21 January
Ron Pope has been compared to the likes of Tom Petty and Bruce Springsteen. The fiercely independent, brutally candid indie-rocker has racked up quite a few accolades over the past decade and a half, drumming up a dedicated fanbase along the way. The recent birth of his daughter and a near-death experience led to some of Pope's most sincere, heartfelt songs to date, which made their way onto his 14th outing Bone Structure. The Georgia-born, Nashville-based rocker – who, like most artists, has been relegated to live-streaming his performances – will host another “Live! And In Sweatpants” show this Thursday.

Jeff Tweedy
Live-Streaming – 23 January
Following the release of two solo albums, Jeff Tweedy returned to his band mates in Wilco with a new outlook on writing, which resulted in one of the group's most direct albums to date, boasting straightforward, cutting lyrics like, "I remember when wars would end." With more than a quarter century of songwriting experience to his name, the indie rock front man has a deep well of material with which to entertain fans during his live-stream session this Saturday.

Bowling For Soup
Live-Streaming – 25 January
For more than 25 years, Texas’ own Bowling For Soup has been sharing its unique (read: smartass) take on pop-rock. A quarter century in the music business is quite the feat no matter the artist, but it’s even more impressive considering the fact that this quartet never took itself very seriously. With 10 studio albums and a Grammy nomination to their name, the Denton rock outfit has proved to be more than a flash in the pan thanks in no small part to a dedicated fanbase. Fans can see front man Jaret Reddick perform via StateIt on Monday.

Nothing More
Live-Streaming – 26 January
San Antonio rockers Nothing More have had a good few years. Following the release of The Stories We Tell Ourselves in 2017, the band received three Grammy nods for their efforts: a nomination for Best Rock Album, another for Best Rock Song and a third for Best Rock Performance. The native Texans didn’t win any awards, but the buzz had begun. The world had been made aware of a well-kept Lone Star secret, and Nothing More now boasts more than a million monthly listeners on Spotify. The alternative-leaning, metal-influenced quartet recently announced an upcoming record, and front man Jonny Hawkins will live-stream a performance featuring Papa Roach’s Jacoby Shaddix on Tuesday.
KEEP THE HOUSTON PRESS FREE... Since we started the Houston Press, it has been defined as the free, independent voice of Houston, and we'd like to keep it that way. With local media under siege, it's more important than ever for us to rally support behind funding our local journalism. You can help by participating in our "I Support" program, allowing us to keep offering readers access to our incisive coverage of local news, food and culture with no paywalls.
Make a one-time donation today for as little as $1.