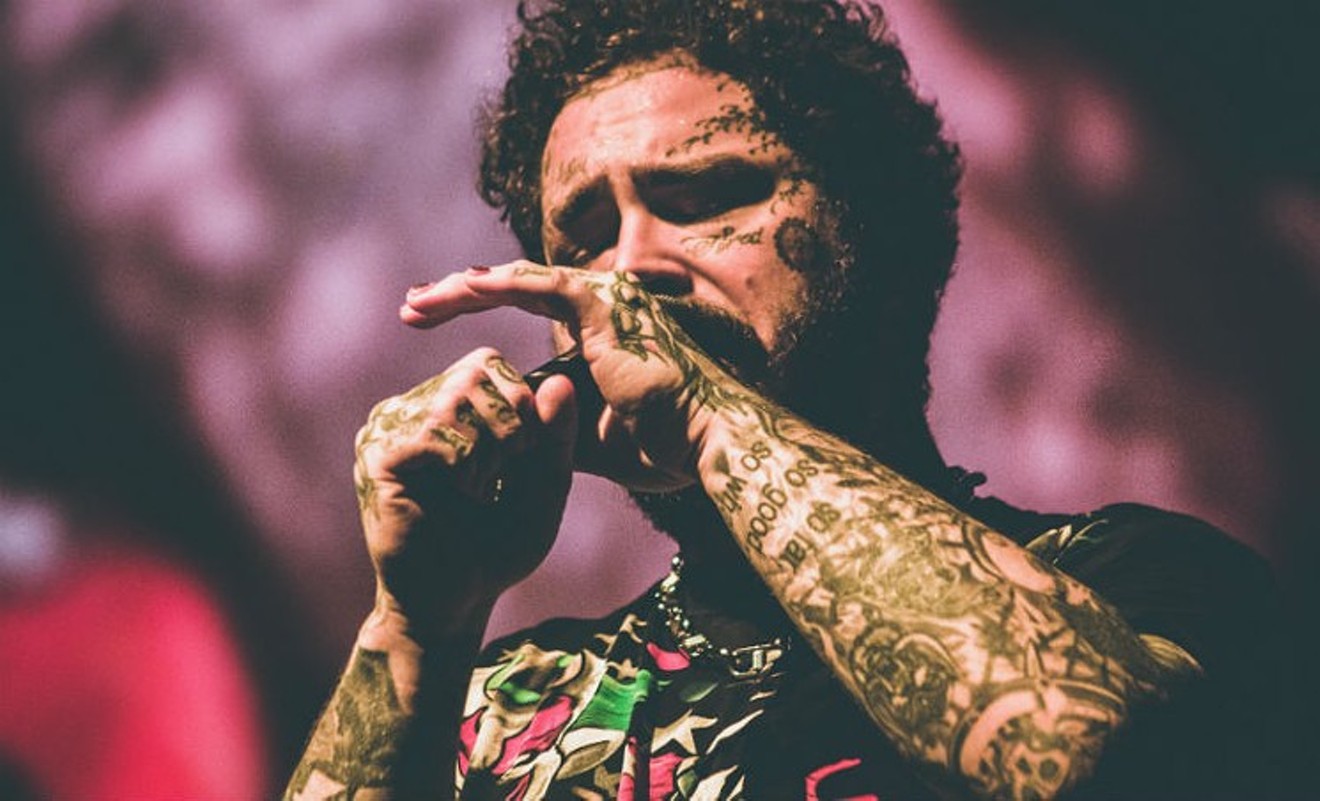 Post Malone at Toyota Center in March 2020 Photo by Robyn Tuazon
It’s crazy to think that it’s been almost a year with little to no live music. And the Houston Livestock Show and Rodeo has been canceled! Not such a hot start to 2021... But some venues are hosting concerts again, albeit at reduced capacity, and that’s news worth celebrating. Keep scrolling to see some of the best shows on tap this week – both streaming and in-person.

Tedeschi Trucks Band
Live-Streaming – 25 February
For a decade now, the Tedeschi Trucks Band has been crafting crowd-pleasing, blues- and jazz-influenced rock music. Rolling Stone called their debut album a "meaty masterpiece" back in 2011, and the group's sound has only evolved since then, incorporating Gospel and a bit of R&B on their latest offering, 2019’s Signs. Tomorrow night, the 12-piece rock outfit is scheduled to live-stream a performance via nugs.tv. Don't miss it.

Junior Brown
Heights Theater – 26 February
Junior Brown – who blends country and rock music, creating an accessible mix of the two – became a professional musician while he was still in in his teens. Raised on a steady diet of Ernest Tubb, the Indiana-by-way-of-Arizona native’s love of honky tonk music persists nearly 50 years on, and music fans are better off for it. One of the most celebrated guitarists in country music, Brown will perform twice at the Heights Theater this Friday.

Rhett Miller
Live-Streaming – 26 February
Over the past 30 years, Rhett Miller has released eight solo albums, complementing a dozen offerings from his alt-country outfit The Old 97’s. The Texas native cut his teeth touring the Bible Belt, eventually becoming a fan favorite in his adopted hometown of Dallas before breaking out as an indie phenomenon nationwide. His music offers a little something for everyone, seamlessly blending an indie feel with just enough twang to remind us all that he's from the Lone Star State. See him perform via StageIt on Friday night.

Aaron Lewis
Live-Streaming – 27 February
Aaron Lewis made a name for himself as the front-man and principal songwriter for Staind, the alt-rock outfit that rose to prominence in the late ‘90s thanks in no small part to a cosign from Limp Bizkit’s Fred Durst. “It’s Been Awhile,” “So Far Away” and “Right Here” dominated the airwaves during the early 2000s before Lewis, seemingly out of nowhere, decided to try his hand at another genre. For the better part of a decade now, the New England native has made a living as a country artist. Since 2011, he has released a trio of solo albums that have been received favorably by even the most apprehensive listeners. See the powerful vocalist and self-declared "Northern Redneck" perform an acoustic show from his couch on Saturday night

Post Malone
Live-Streaming – 27 February
Four months after his last sold-out performance in Houston, Texas's own Post Malone returned to the Bayou City for a victory lap. (It was the last show this writer attended before COVID-19 shut everything down.) His latest album, 2019’s Hollywood's Bleeding, doubled down on pop and veered even further from rap, but the Dallas-born singer-songwriter's star continued to rise all the same. Boasting guest appearances from the likes of Halsey and Ozzy Osbourne, Post's third studio album gave fans an even intimate glimpse into the chart-topper's headspace. Fans can see him perform this Sunday via Twitch or YouTube.
KEEP THE HOUSTON PRESS FREE... Since we started the Houston Press, it has been defined as the free, independent voice of Houston, and we'd like to keep it that way. With local media under siege, it's more important than ever for us to rally support behind funding our local journalism. You can help by participating in our "I Support" program, allowing us to keep offering readers access to our incisive coverage of local news, food and culture with no paywalls.
Make a one-time donation today for as little as $1.