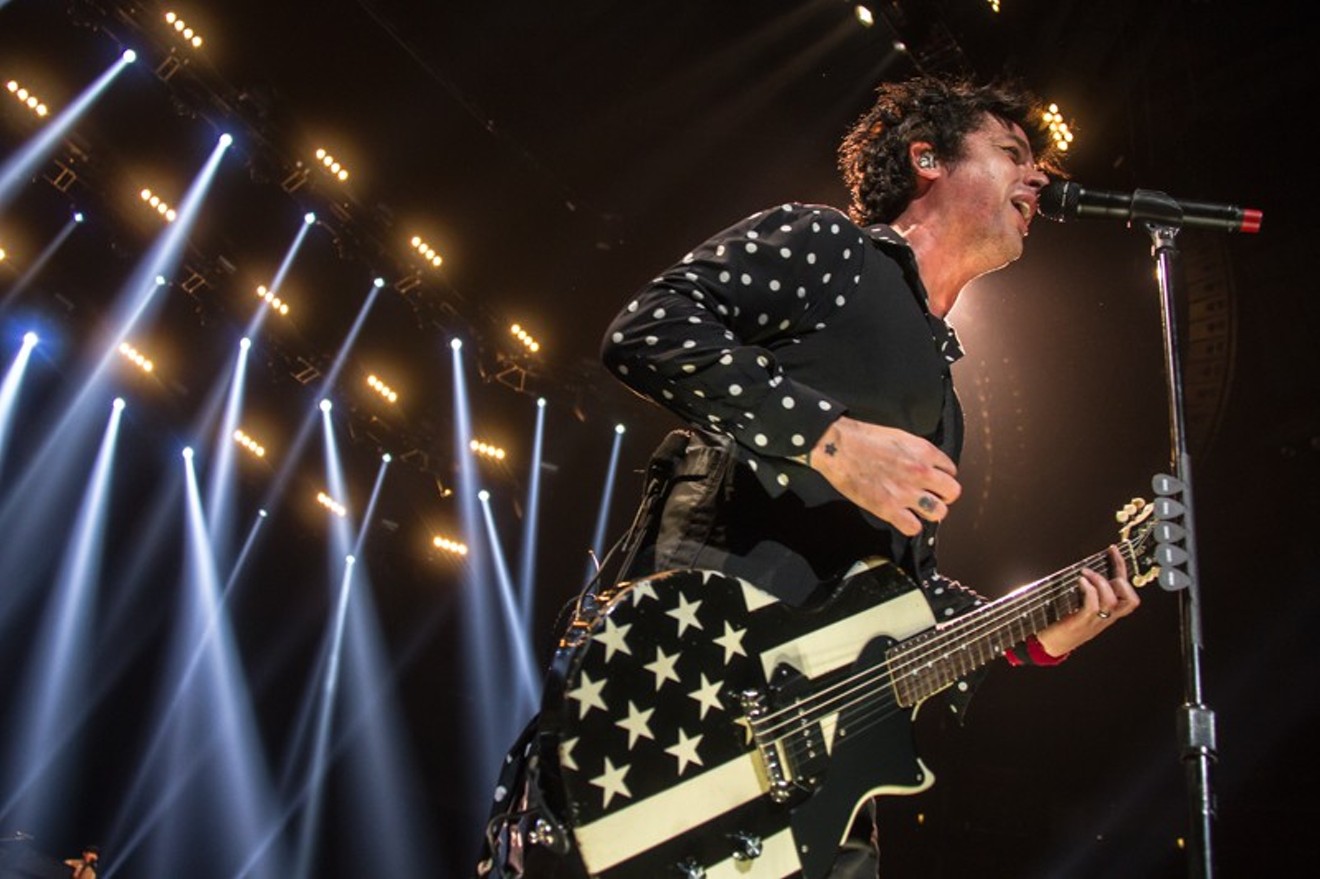 Green Day at Toyota Center in 2017 Photo by Violeta Alvarez
There’s quite a bit of good music coming through town this week. We hope to see you out and about. COVID-19 cases are on the rise in Harris County (and in the rest of the country), but the silver lining is that hospitalization rates among vaccinated folks remain low. So get your vaccine if you haven't already, and come join us for some good tunes.

Hella Mega Tour
Minute Maid Park – 07.29
Originally scheduled for August of last year, Green Day, Fall Out Boy and Weezer's co-headlining tour was postponed due to the novel coronavirus pandemic. Eleven months and 28 days later, the trio of iconic American rock bands – who boast five Grammy Awards and 22 nominations between them – will finally bring The Hella Mega Tour to Houston’s Minute Maid Park. The show has been sold-out for almost two years now, so if you don't already have tickets you'll probably have to pay a hella premium to get in.

Pop Evil
Warehouse Live – 07.29
Since their inception 20 years ago, hard rockers Pop Evil have released five singles that have climbed to the top of the Billboard Rock charts. On their latest release, the Michigan-born outfit leans into radio-friendly power ballads while maintaining enough grit to appease longtime fans who prefer their heavier side. On tour in support of their sixth studio album, Versatile, Pop Evil will perform with Zero 9:36 and BRKN LOVE at Warehouse Live tomorrow night.

Robert Ellis
Heights Theater – 07.30
Former Houston native Robert Ellis is a local legend. He cut his teeth performing weekly at the now-defunct Mango’s, the vegan café that was celebrated for its generous pours and nightly music, before departing from the Bayou City. Ten years after signing a record deal with New West Records, Ellis boasts five studio albums and his latest – 2019’s Texas Piano Man – showcases some of his best work, heartfelt at times and hilarious at others. See him at the Heights Theater this Friday, supported by Belaver.

Yngwie Malmsteen
Warehouse Live – 07.31
Guitarist Yngwie Malmsteen has been famous in heavy metal circles for the better part of 40 years. Renowned for his neoclassical playing style and prolific output, the Swedish songwriter released his 22nd studio album Parabellum just last year. Having seen Malmsteem perform before, I can say with certainty that fans of extended guitar solos shouldn’t miss his show with Paralandra, Images of Eden and John 5 at Warehouse Live on Saturday night.
KEEP THE HOUSTON PRESS FREE... Since we started the Houston Press, it has been defined as the free, independent voice of Houston, and we'd like to keep it that way. With local media under siege, it's more important than ever for us to rally support behind funding our local journalism. You can help by participating in our "I Support" program, allowing us to keep offering readers access to our incisive coverage of local news, food and culture with no paywalls.
Make a one-time donation today for as little as $1.