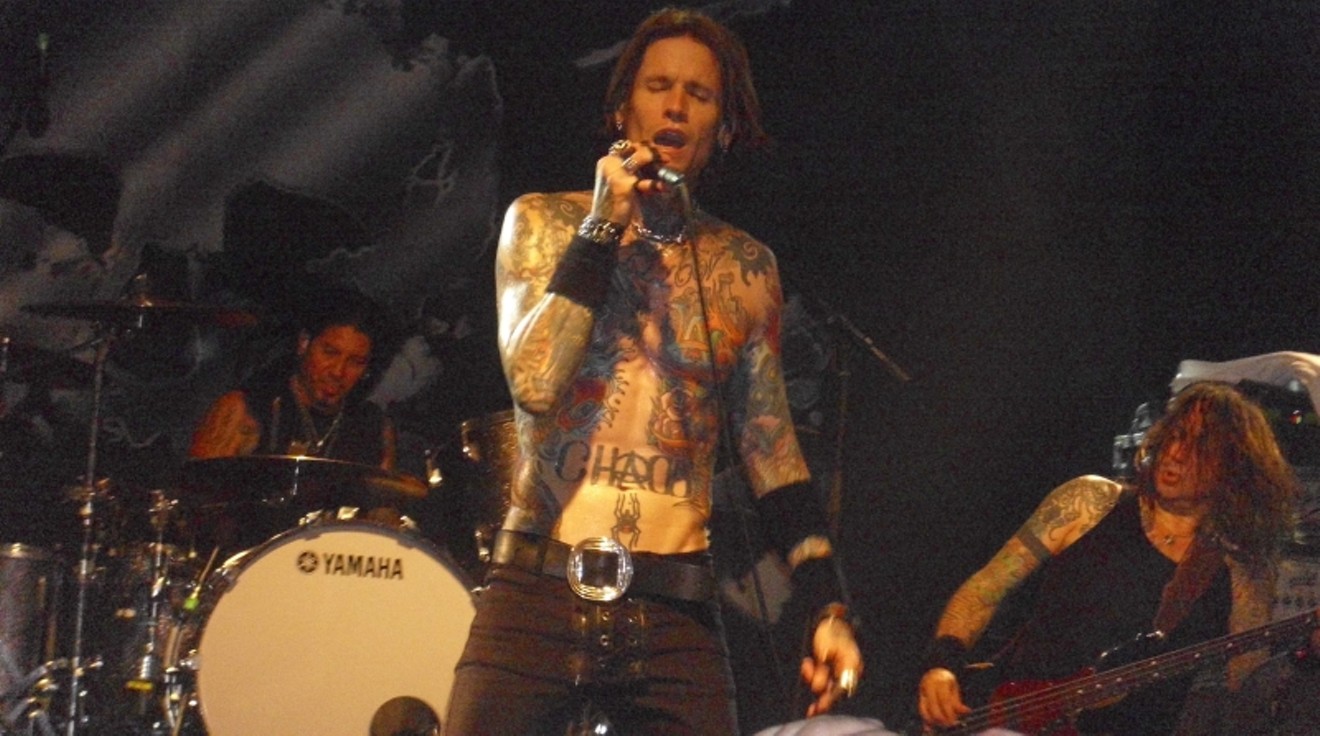 Josh Todd and his collection of tattoos will lead Buckcherry through a set of meat and potatoes rock and roll this Sunday at RISE Rooftop. Photo by Druchii. Creative Commons Attribution-Share Alike 3.0.
Houston music fans who endured sweltering heat to attend Bun B’s Summer Jam HTX this past weekend will be glad to hear that several shows mentioned in this week’s Concert Watch are indoors and air-conditioned. That won’t always be the case as we move through the summer months, but for the moment we can get at least some relief from our coastal climes.
Debbie Gibson has always been something of an overachiever, with the distinction of being the youngest artist (at 16 years old) to write, produce, and perform a Billboard number-one single, her smash hit “Foolish Beat.” At 51, she is back on the road in support of her album The Body Remembers, with a performance at the House of Blues on Saturday. For details on her incredible career as a musician, actress, and record company owner, check out this Houston Press piece from Jesse Sendejas Jr.
Then, turning a musical 180, there’s Buckcherry, in many respects the antithesis of the wholesome, all-American Ms. Gibson. These tatted-up dudes have been cranking out meat and potatoes rock and roll since 1999, when they released “Lit Up,” one of the best songs ever about the joys of getting high on cocaine (“Chop a line for the fiending man / ‘Cause he wants one”). Buckcherry’s most significant contribution to 21st century popular culture came a few years later, in the form of “Crazy Bitch,” which, so I am told, is still a popular number at exotic dancing establishments. Lead singer Josh Todd and crew will light it up on Sunday at the RISE Rooftop in Midtown.
A number of Juneteenth celebrations are on tap for this weekend, some of them featuring musical performances. Emancipation Park will mark its 150th anniversary with a concert on Sunday afternoon including sets from The Isley Brothers, Maze, Kool and the Gang, and Sheila E. The show is free, but tickets are required, and they are available at the Emancipation Park website.

Celebrating Juneteenth at Miller Outdoor Theatre is a long-standing Houston tradition. This year’s commemoration on Sunday evening centers around the program Juneteenth: The Journey to Freedom, which traces African American history from the arrival of slaves in colonial America through the Civil War and the civil rights movement. Over 250 singers, dancers, and musicians will be part of the show. Get there early and check out a historical reenactment by the Buffalo Soldiers Museum, which will provide a look at what conditions were like for the Black soldiers who served in the army in the decades following the Civil War. Free tickets for covered seating will be available on Saturday at 10 a.m. through the Miller Theatre website.
Rockers who hung out in Houston clubs during the late ‘70s remember the crazed performances of Joe King Carrasco, who would often leave the stage to jump from table to table, sometimes even throwing a back flip into the routine. A musical descendent of the Sir Douglas Quintet (“She’s About a Mover”), Sam the Sham and the Pharaohs (“Wooly Bully”), and ? and the Mysterians (“96 Tears”), he toured extensively across Europe and even ended up on MTV and “Saturday Night Live.” These days, Carrasco spends most of his time at Nacho Daddy, a restaurant he owns in Puerto Vallarta, hanging out with his Jack Russell Terriers. Still, the lure of the stage pulls “the king of Tex-Mex rock and roll” back onto the road periodically, and Carrasco will bring his wild-ass party to the Continental Club on Friday.
KEEP THE HOUSTON PRESS FREE... Since we started the Houston Press, it has been defined as the free, independent voice of Houston, and we'd like to keep it that way. With local media under siege, it's more important than ever for us to rally support behind funding our local journalism. You can help by participating in our "I Support" program, allowing us to keep offering readers access to our incisive coverage of local news, food and culture with no paywalls.
Make a one-time donation today for as little as $1.