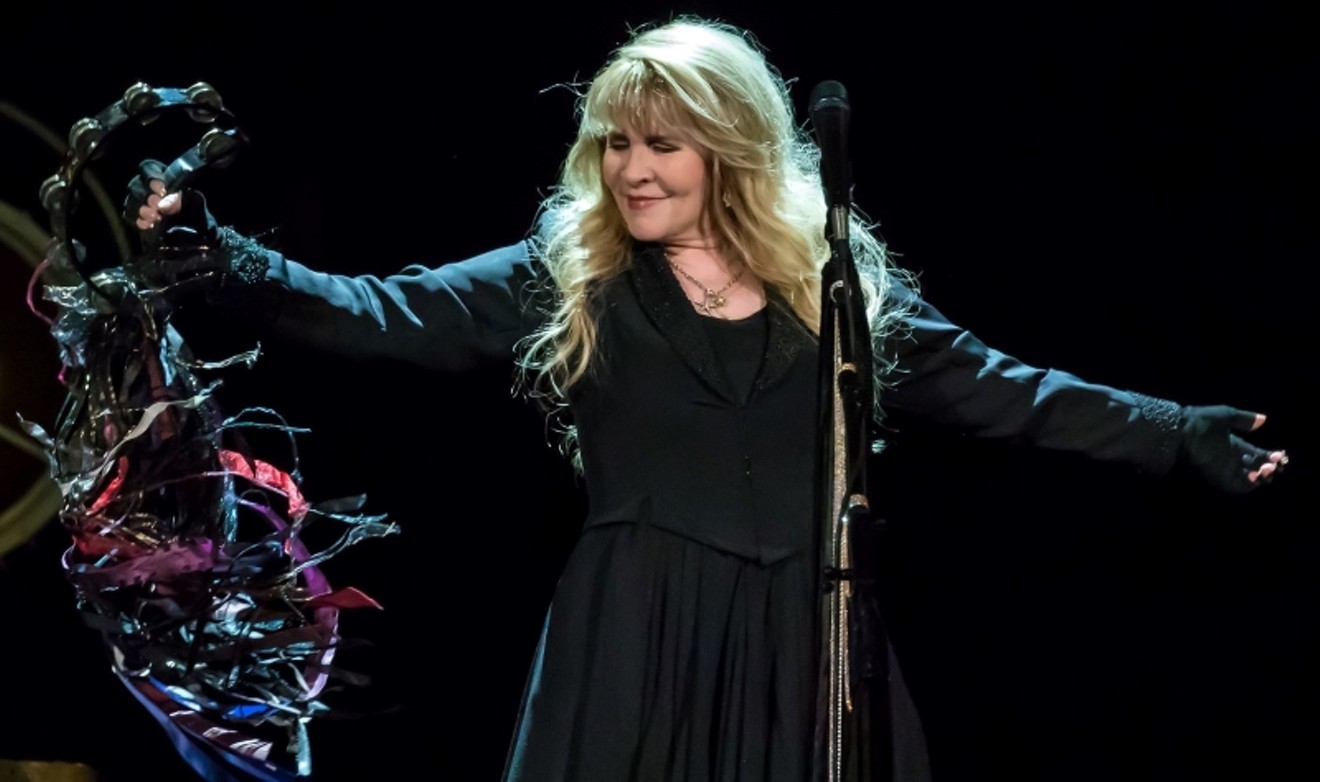 Stevie Nicks, shown here in mid twirl, will be at the Cynthia Woods Mitchell Pavilion on Sunday. Shows by The Chicks, Lil Nas X, and 8 1/2 Souvenirs are also on tap this week. Photo by Ralph Arvesen. Creative Commons.
Why so cryptic? Ed Sheeran, everyone’s favorite British ginger, has announced his upcoming concert tour, billed as: +-=÷x. Not exactly a logical marketing strategy. Not to mention the fact that he’s making scribes around the world (this one included) figure out how to type a division sign. The collection of symbols is pronounced, so Sheeran says, “The Math Tour.” I supposed it all sort of makes sense when you consider that his last album was titled =.  If you’re interested in going to the show, study up, as tickets go on sale soon. You can sign up for a Verified Fan Presale at Sheeran’s website until October 9. The concert will be on May 23, 2023, at NRG Stadium. Taking a look at more immediate concert action, here is what’s coming up this week:
Since making a splash with happy hour appearances at Austin’s Continental Club in the mid ‘90s, the members of 8 1/2 Souvenirs have continued to refine their jazzy musical mélange, drawing a “confluence of European cafe society and rockabilly, slacker, and jazz fans.” The band’s name combines two of its biggest influences, composer Nino Rota (who wrote the score for Federico Fellini’s film 8 1/2) and guitarist Django Reinhardt. They will be in Houston for a show at the Mucky Duck on Thursday.
The Chicks are back, appearing this Saturday at the Cynthia Woods Mitchell Pavilion. The ladies have dropped the “Dixie” portion of their band name to prevent any whiff of racism, but everything else is pretty much the same: lots of hits, a spectacular stage show, and charisma to spare.
Stevie Nicks is 74 years old (where does the time go?), but she shows no signs of slowing down. Her Edge of 17 tour stops at the Cynthia Woods Mitchell Pavilion Sunday evening, no doubt with her legion of loyal fans out in force. Top hat? Check. Black Lace? Check. Scarves? Check. And if you’re feeling truly ambitious, you might want to take along a white-winged dove. Ooh, baby, ooh. Ooh.
Rapper Lil Nas X is at the 713 Music Hall on Tuesday. Nas is comfortable in his own skin, a gay man who has been out for some time and has recently been wearing a skirt (a Coach skirt, fashionistas) onstage. “I felt like I was setting my younger self free,” he was recently quoted as saying. Nas was also free enough to inform the audience as to why he had to stop a recent show in Atlanta, for an emergency bathroom break. That’s as much detail as I will go into here, but Nas dished the, er, dirt on mic during the concert, maybe verging into TMI territory. When he’s in Houston, let’s hope that Nas heeds the universal parental admonishment, “You should have gone before you left home.”
KEEP THE HOUSTON PRESS FREE... Since we started the Houston Press, it has been defined as the free, independent voice of Houston, and we'd like to keep it that way. With local media under siege, it's more important than ever for us to rally support behind funding our local journalism. You can help by participating in our "I Support" program, allowing us to keep offering readers access to our incisive coverage of local news, food and culture with no paywalls.
Make a one-time donation today for as little as $1.