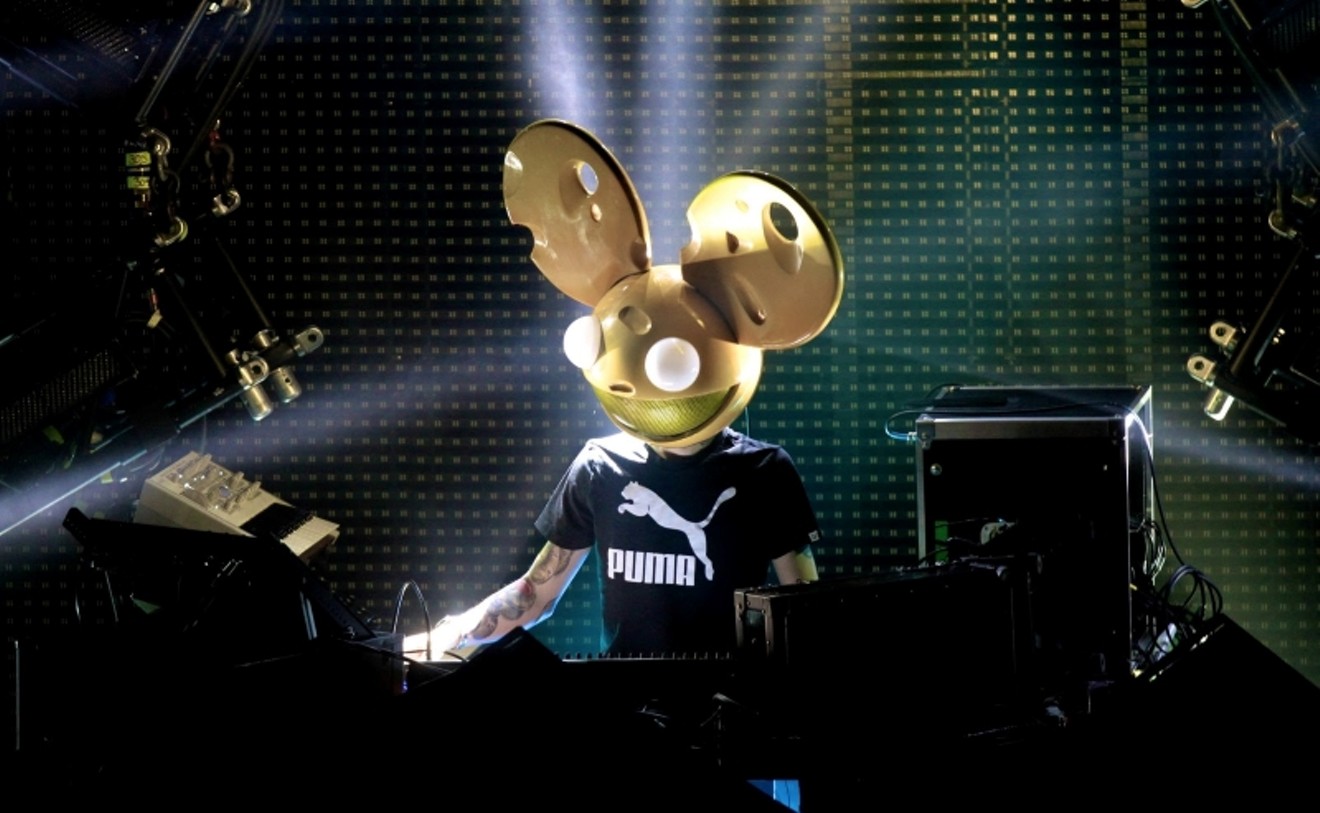 Deadmau5 will be at the 713 Music Hall on Friday to kick off a festive post-Thanksgiving weekend. Shows by Judas Priest, Shawn Phillips, and King's X are also on tap this week. Photo by Deadmau5 :D. Creative Commons.
After dutifully attending familial celebrations and behaving appropriately on Thanksgiving, many of us will be more than ready to kick out the jams, and this week’s batch of concerts will provide just such an opportunity. From Deadmau5 to King’s X to Judas Priest (fresh off an appearance at the Rock and Roll Hall of Fame with Dolly Parton!), there’s something for everyone when it comes to getting all that turkey and cranberry sauce out of your system.
Electronic music whiz Deadmau5 will be at the 713 Music Hall on Friday, providing some chill after all that Black Friday nonsense. The artist / musician / producer has been releasing albums since 2005, making a unique musical and stylistic statement. Case in point: While learning to use a 3-D printer, Deadmau5 (Mr. Mau5?) created a sort of helmet that he began wearing onstage, one that, in the minds of many, resembled a certain rodent associated with Disney empire. Though writer Harlan Ellison famously cautioned, “Nobody fucks with The Mouse,” Deadmau5 went into battle with Disney in a copyright dispute, eventually settling out of court. If you have never read Ellison’s essay “The 3 Most Important Things in Life,” I urged you to check it out here. Part 3, entitled “Labor Relations,” deals specifically with his adventures in the Disney dungeon, but it’s all a worthwhile read.
At this point, it doesn’t pay to get too hung up on strict chronology. Today’s classic rock fan is pummeled from all sides by entreaties to experience this anniversary or that one. And what with pandemic-related reschedulings all over the calendar during these past couple of years, the notion of a precise anniversary date seems almost antiquated. But don’t tell that to Judas Priest. The British metal-meisters will be celebrating “50 Heavy Metal Years” on Tuesday at the 713 Music Hall. In this case, I suppose the current tour's name refers to 2023 being the fiftieth anniversary of lead singer Rob Halford joining Judas Priest. No matter. Priest is still Priest, and Halford is still the Metal God.
In the ‘70s, Shawn Phillips was the epitome of a cult artist, a folkie with a rocker’s edge, known only to those who were hip to the trip. A semicircle of guitars surrounded him onstage, with Phillips seated in the middle, hair down to his ass, illuminated by a golden spotlight. He would weave a mysterious musical web, combining guitars, bass pedals, and a voice of incredible range into an ethereal brew that held his fans transfixed. Now near 80, Phillips is still doing his thing, his talents diminished not a whit. On Tuesday, he will be at the Mucky Duck, a perfect spot to experience his artistry. Spiritual trivia (to quote Kinky Friedman): Phillips sang background vocals on the Beatles’ “Lovely Rita.”
Prog-metal band King’s X was based in Houston for a number of years during the ‘80s, so we will claim them as our own. Though members Doug (or dUg, if you prefer) Pinnick, Ty Tabor, and Jerry Gaskill have all stayed busy making guest appearances and collaborating with other artists since the band’s heyday, King’s X has reunited periodically to tour and record, most recently with Three Sides of One, released in September. They will be at Warehouse Live on Saturday, with Karim K opening.
KEEP THE HOUSTON PRESS FREE... Since we started the Houston Press, it has been defined as the free, independent voice of Houston, and we'd like to keep it that way. With local media under siege, it's more important than ever for us to rally support behind funding our local journalism. You can help by participating in our "I Support" program, allowing us to keep offering readers access to our incisive coverage of local news, food and culture with no paywalls.
Make a one-time donation today for as little as $1.