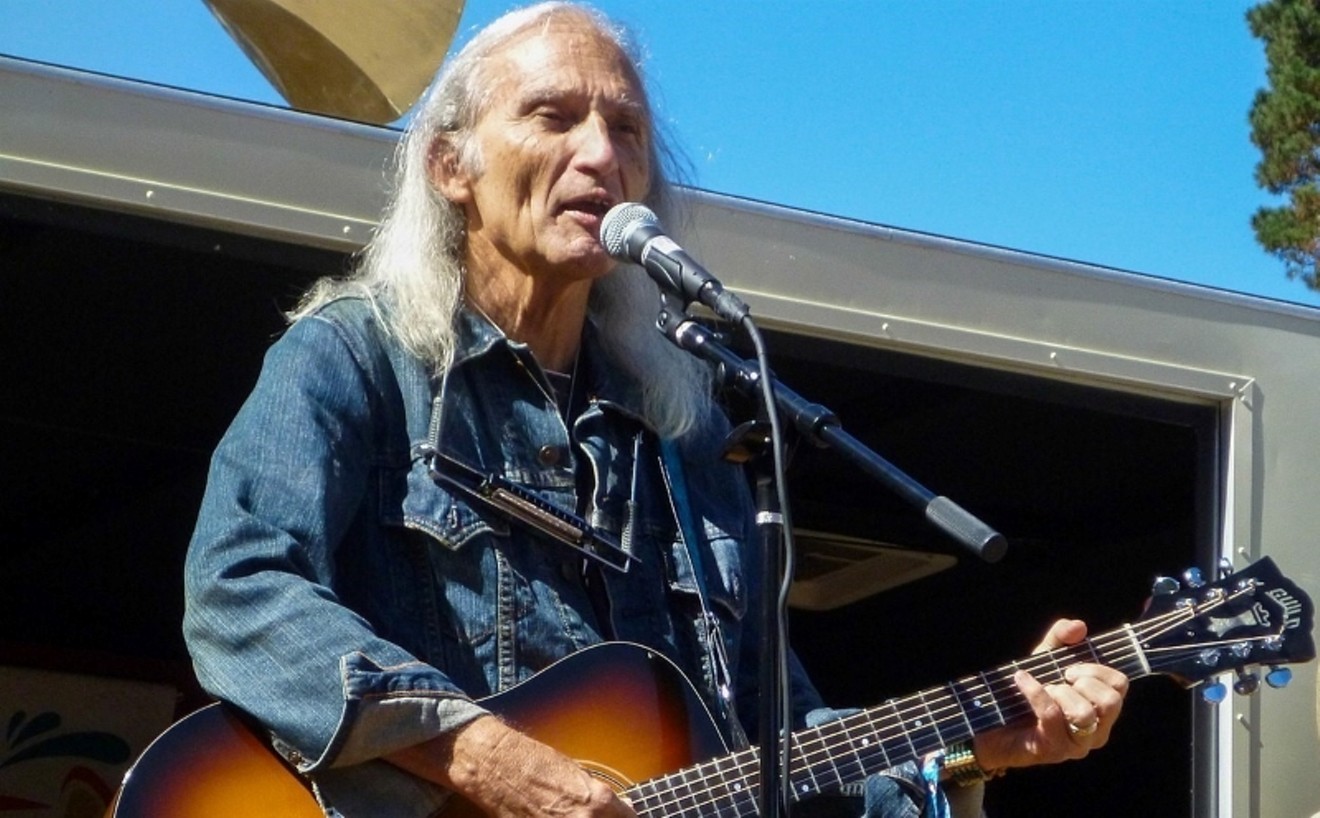 Jimmie Dale Gilmore (pictured) and Butch Hancock will perform on Friday at the Mucky Duck. Shows from Steve Krase, Hamilton Loomis, and the Toadies are also on tap this week. Photo by David Becker. Creative Commons.
Whether you need little boost to get psyched for what promises to be a chilly Christmas or just want to get out of the house and away from the relatives, H-Town has you covered this week. And since the holiday season tends to produce an unfortunate amount of stress in many folks, please bear the following in mind this year: breathe deeply, count your blessings, and protect your tender vegetation.
As the saying goes, two out of three ain’t bad. Particularly when it comes to the Flatlanders. Jimmie Dale Gilmore and Butch Hancock, two-thirds of the legendary Lubbock trio (Joe Ely, the third Flatlander, is taking a break from touring) will perform two shows at the Mucky Duck on Friday, giving Houstonians the opportunity to hear these giants of Texas music. And lest we forget, Gilmore is an artistic double threat, appearing in several films, including The Big Lebowski. “Mark it 8, Dude!”
The holiday season is all about traditions, and one of the most festive Christmas customs in Houston is Steve Krase’s annual Holiday Ball. Krase puts on a hell of a show, and he tears it up on the harmonica. (Alternately, if you prefer, the spit fiddle, the tin sandwich, or the Mississippi saxophone.)  This year’s show is on Friday at the Big Easy and will include a guest appearances by Clay Melton. Truly a festive evening.
Red and green are the colors generally associated with Christmas, but Hamilton Loomis makes a case that blue should be included as well. The Galveston-born guitarist (and former protégé of Bo Diddley) will play at the Dosey Doe Big Barn on Friday, cranking out his signature high-energy blues, along with songs from his holiday album This Season.
If you were around in the mid ‘90s, you may well have a soft spot for the Toadies. The Fort Worth grunge / alt-rock band was poised for big things after their (way creepy) song “Possum Kingdom” achieved top 40 status. Unfortunately, squabbles with their record company effectively tanked the Toadies' career after a promising start. Nevertheless, the band has a dedicated fan base, and the Toadies have continued to perform sporadically over the years, with a show set for Tuesday at the House of Blues.
However, if you aren’t into crowds – or people in general – during the runup to Christmas, you can always check out one of the greatest holiday musical specials ever committed to videotape. It’s “Pee-wee’s Playhouse Christmas Special,” which aired (probably only once) in 1988. This gem – and I do not use the term ill-advisedly – will make you rethink everything you know about television’s seasonal fare. Pee-wee is joined by all the regulars, like Cowboy Curtis, Miss Yvonne, and Jambi, but this time there are special guests. Who? Oh, just some small-timers like Cher, Grace Jones, and Little Freaking Richard (on ice!). Sorry, I just can’t leave out the rest of the cast (deep breath here): Frankie Avalon, Charo, the Del Rubio Triplets, Annette Funicello, Whoopi Goldberg, Magic Johnson, k.d. lang, Joan Rivers, Dinah Shore, Oprah Winfrey, and Zsa Zsa Gabor. Fun fact: William Marshall, who played the King of Cartoons on “Pee-wee’s Playhouse” also portrayed Blacula in the ‘70s blaxploitation flick of the same name. Isn’t pop culture grand?
KEEP THE HOUSTON PRESS FREE... Since we started the Houston Press, it has been defined as the free, independent voice of Houston, and we'd like to keep it that way. With local media under siege, it's more important than ever for us to rally support behind funding our local journalism. You can help by participating in our "I Support" program, allowing us to keep offering readers access to our incisive coverage of local news, food and culture with no paywalls.
Make a one-time donation today for as little as $1.