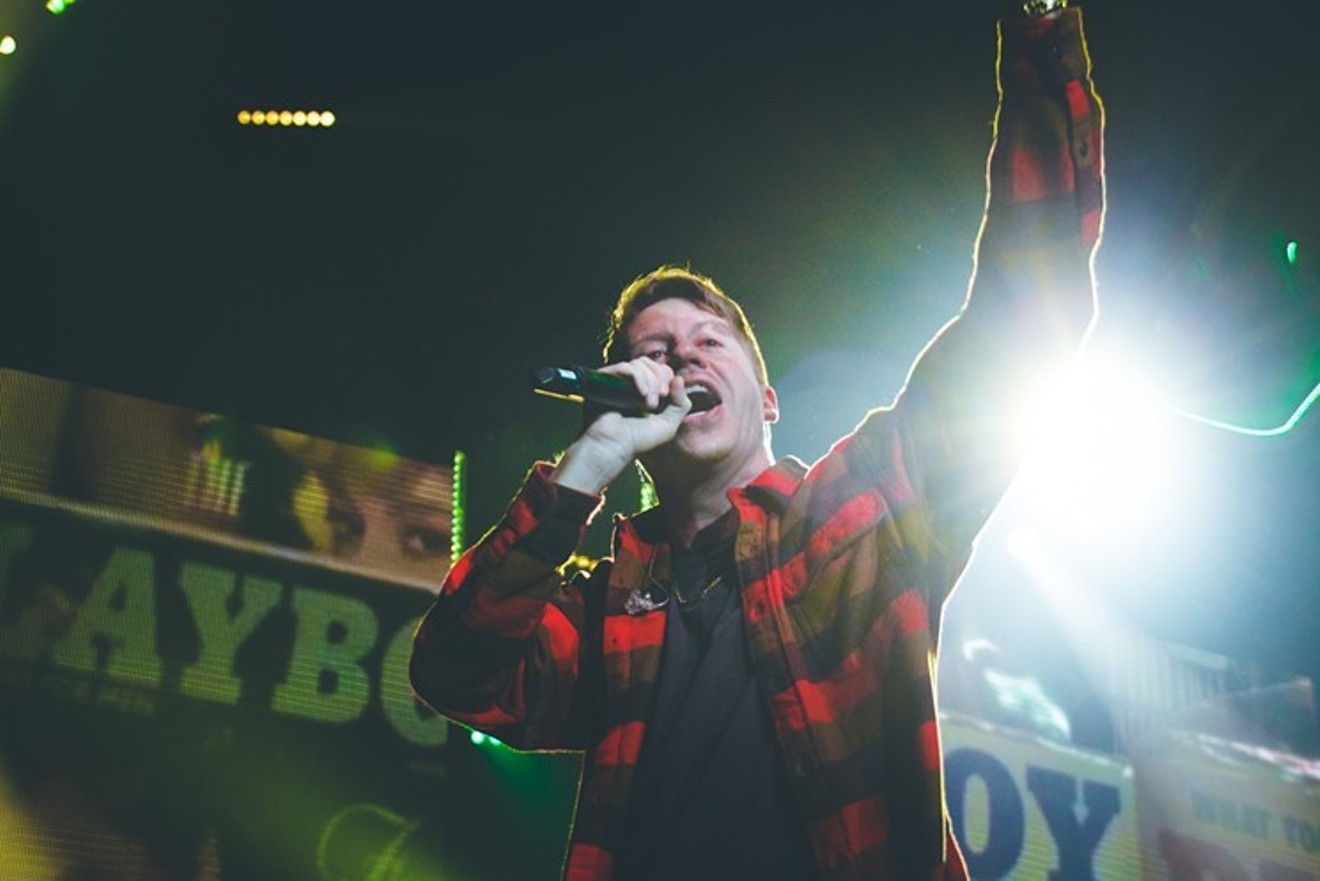 Seattle's own Macklemore Photo by Marco Torres
Just when it seemed like we had weathered the worst of it, Harris County Judge Lina Hidalgo warned that Houston "may be reaching the precipice of a disaster" regarding Covid-19. Mask orders are back in effect — even though everyone really should have been wearing them all along — and it looks as though we may be headed for another lockdown. That being the case, we encourage everyone fortunate enough to be working from home to support local charities and local businesses — including music venues and record stores - while you enjoy the following concerts from the comfort of your own homes.

Macklemore
8 p.m. – June 24
Nearly a decade removed from his breakthrough single “Thrift Shop,” Ben Haggerty – better known by the moniker Macklemore – has freed himself from the shackles of superstardom. The Seattle-born rapper unintentionally wandered into controversy a few years back when, after winning a Grammy Award for Best Rap Album, he attempted to speak on white privilege, leaving many of his fans feeling both alienated and confused while his detractors continued mocking him. He eventually returned with Gemini, a staunchly apolitical record, which saw Haggerty returning to an amicable flow and upbeat, often silly lyricism. His missteps aside, Macklemore's music remains fun and life-affirming. Alongside Pearl Jam and Ben Gibbard, the Washington state native will perform tonight at All in WA, a benefit concert in response to the novel coronavirus pandemic.

Ciara
8 p.m. – June 24
Atlanta singer Ciara became a household name in the mid-2000s, supported by hit singles “Goodies” and “One, Two Step.” Sixteen years removed from her breakout debut, the R&B crooner has released a total of seven studio albums, each less celebrated than the last. Her latest, 2019’s Beauty Marks, saw the Texas native treading similar waters, much to the chagrin of critics. Nonetheless, Ciara continues to rack up streams and views, and she remains an iconic voice in the music industry, even if she’s more of a nostalgia act these days. See her perform on Facebook tonight.

Haim
6 p.m. CST – June 25
Perhaps best known for their retro sound, Haim boasts an aptitude for quite a few other genres as well. Sisters Este, Danielle and Alana incorporate elements of rock and roll, R&B and even synth-pop into their beguiling tunes, which have drawn favorable comparisons to the likes of Fleetwood Mac - though the band typically eschews this likening. Recently, the Haim siblings released a music video for “I Know Alone,” the first single off their upcoming album Women In Music Part III, which is due out on this weekend. Fans eagerly anticipating the group's third studio album can watch them perform via live stream on Pitchfork’s Listening Club on Thursday night.

Pussy Riot
3 p.m. CST – June 28
Pussy Riot gained international infamy nearly a decade ago when five of its members staged a performance inside of Moscow’s Cathedral of Christ the Saviour, eventually leading to the arrests of Nadezhda Tolokonnikova, Maria Alyokhina and Yekaterina Samutsevich, who were then convicted of “hooliganism motivated by religious hatred.” The feminist outfit, which makes protest-driven punk music, also predicted the election of Donald Trump weeks before the last election. Following the death of George Floyd at the hands of Minneapolis police and the ensuing protests, Pussy Riot also released an anthem decrying police brutality. Catch their live stream on Sunday afternoon.

Third Eye Blind
11 a.m. – June 29
At this point, it wouldn't be unfair to call Third Eye Blind a nostalgia act. Formed in 1993, the Californian outfit saw mainstream success through the mid 2000s with the likes of “Semi-Charmed Life,” “Jumper” and “Never Let You Go.” The band’s popularity waned a bit after 2003’s Out Of The Vein, but that hasn’t kept front man Stephan Jenkins from writing plenty more original material for a dedicated fan base. Marking 100 days since the Covid-19 pandemic forced the group to cancel its latest tour, Jenkins and crew will live stream a performance from San Francisco on Monday morning.
KEEP THE HOUSTON PRESS FREE... Since we started the Houston Press, it has been defined as the free, independent voice of Houston, and we'd like to keep it that way. With local media under siege, it's more important than ever for us to rally support behind funding our local journalism. You can help by participating in our "I Support" program, allowing us to keep offering readers access to our incisive coverage of local news, food and culture with no paywalls.
Make a one-time donation today for as little as $1.