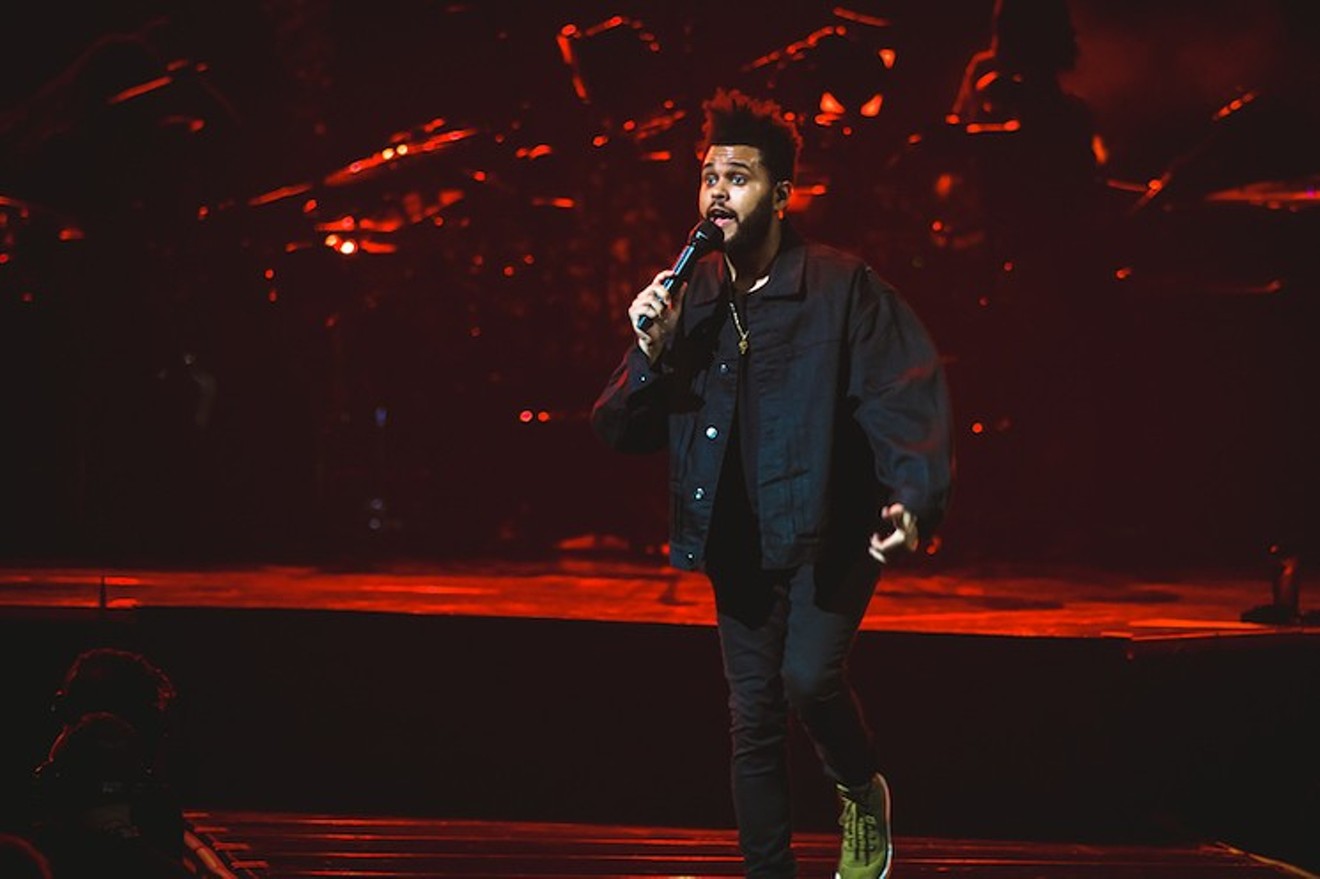 The Weeknd onstage at Toyota Center in 2017 Photo by Marco Torres
On Monday, Mayor Sylvester Turner said he was seeing "too many street parties, house parties, zydecos on the corners, backyard parties, and more happening in our city especially when individuals are not wearing masks." In the before times, such events would be celebrated; these days, they're cause for concern. Turner went on to urge Houstonians to discontinue these gatherings, given that the number of confirmed cases in the Houston region is nearing 110,000. So while we all stay inside, let's take a look at six of the best live-streaming concerts we can all enjoy from the comfort of our own homes.

Amanda Shires
2 p.m. CST – August 5
In 2016, Amanda Shires had an idea. Fed up with a lack of representation in the music business — specifically within the country genre — the Lubbock native contacted fellow singer-songwriter Brandi Carlile and proposed forming a female version of The Highwaymen. Aptly named The Highwomen, Shires and Carlile teamed up with Natalie Hemby and Maren Morris to put together the supergroup’s first proper record, which was met with critical acclaim just last year. Shires also boasts eight solo studio albums to her name, most recently 2018's To The Sunset. Earlier this year, before the pandemic effectively shuttered concerts worldwide, she visited the Heights Theater in support of her latest single “Deciphering Dreams,” and she has kept busy during quarantine with weekly live-streamed performances. Fans of her emotive soprano can watch her on YouTube tonight, alongside Becca Mancari, Bre Kennedy, Devon Gilfillian and more. Proceeds from the concert will benefit the ACLU of Tennessee and the CHOICES Memphis Center for Reproductive Health.

Ryan Bingham
11 a.m. CST – August 6
Ryan Bingham plays grief-stricken country. His scratchy vocals exude heartache and bad luck at every turn, even when the former Houstonian sings of greener pastures and hope for the future. In 2009, "The Weary Kind" launched Bingham into the national spotlight, and he used his time in the sun to carve out a nice space for himself in the industry. Formerly known as a rising country star, Bingham has branched out. With half a dozen studio albums to his name, the journeyman has showcased a flair for everything from folksy Americana to honest-to-goodness rock and roll. This Thursday, the emotive singer-songwriter will perform - digitally, of course – alongside John Doe, Benjamin Booker, Eric Gales, Jonny Lang and the Marcus King Band at Musik Fest 2020.

Bowling For Soup
4 p.m. CST – August 6
For more than a quarter century, Texas’ own Bowling For Soup has been sharing its unique (read: smartass) take on pop-rock. Twenty-six years in the music business is quite a feat no matter the artist, but it’s even more impressive considering the fact that this quartet never took itself very seriously. With ten studio albums and a Grammy nomination to their name, the Denton rock outfit has proved to be more than a flash in the pan thanks in no small part to a dedicated fanbase. See front man Jaret Reddick perform the hits and talk with MEST front man Tony Lovato on Veeps this Thursday. Proceeds from the event will benefit the South Suburban Family Shelter.

The Weeknd
11:30 p.m. CST – August 7
Mea culpas have become their own sub-genre of rap and R&B. But if The Weeknd is any indication, wrongdoers needn't change their behavior so long as the they're willing to admit their misdeeds. It’s hard to discern whether the Canadian crooner, born Abel Tesfaye, is bragging or lamenting his misadventures, as dance-friendly beats often belie the darkness of his lyrics, but regardless, his latest offering – After Hours – might be his best work yet. Some of The Weeknd's lyrics are great; others come across a misogynistic mess. Somewhere in the middle is a man who's just trying to enjoy his youth. Unfortunately for the artist himself, Tesfaye seems just a little too self-aware to find happiness in any of it. The anti-hero will perform on TikTok’s “first-ever in-app cross reality experience” on Friday.

Ron Pope
7:30 p.m. CST – August 8
Ron Pope has been compared to the likes of Tom Petty and Bruce Springsteen. The fiercely independent, brutally candid indie-rocker has racked up quite a few accolades over the past decade and a half, drumming up a dedicated fanbase along the way. The recent birth of his daughter and a near-death experience led to some of Pope's most sincere, heartfelt songs to date, which made their way onto his 14th outing Bone Structure, which was released in March. The Georgia-born, Nashville-based rocker – who, like most artists, has been relegated to live-streaming his performances – will host his 28th “Live! And In Sweatpants” show this Saturday. Here's hoping he's washed those sweatpants a few times in the past couple of months.

Björk
12 p.m. CST – August 9
After releasing her debut album at the tender age of 11, Björk went on to become an international success 20 years later with Homogenic, which received critical acclaim both in her native Iceland and abroad. By combining electronic elements with string arrangements, Björk crafted one of the most unique and ambitious albums of the ‘90s. Forty years into her career, the Icelandic singer continues to be a force. Her last solo outing, 2017’s Utopia, received a Grammy nod for Best Alternative Music Album. Performing from Harpa Hall in Reykjavík, Björk will be accompanied by the Hamrahlíð Choir this Sunday for what should be one of the more memorable live-streams since the Covid-19 pandemic put a damper on everything. Twenty percent of the proceeds from the event will be donated to women’s charities of Björk's choosing.
KEEP THE HOUSTON PRESS FREE... Since we started the Houston Press, it has been defined as the free, independent voice of Houston, and we'd like to keep it that way. With local media under siege, it's more important than ever for us to rally support behind funding our local journalism. You can help by participating in our "I Support" program, allowing us to keep offering readers access to our incisive coverage of local news, food and culture with no paywalls.
Make a one-time donation today for as little as $1.