Tobe Nwigwe Puts On a Spectacle at White Oak

Tobe Nwigwe has been on a seemingly unstoppable upward trajectory for just over a year. Beginning sometime in the summer of 2017, the ex-football star and amateur rapper from Alief with a trademark baritone flow began generating mild interest online with a series of weekly freestyles.

Nwigwe has since risen to fame in a remarkably short span. Particularly for an independent artist whose only outlets for self-promotion have been Instagram and YouTube. After a whirlwind 2018 that included a viral freestyle on the career making, Sway in the Morning, as well as appearances on BET, ESPN, and SXSW, Tobe's natural next step was to put on his first solo concert back home in Houston.

Only, this was no solo show. Tobe From the Swat was a multi-artist, multi-disciplinary spectacle. The kind that rivaled million-dollar stadium productions by the likes of Kanye West and Kendrick Lamar. From music, to visuals, to light and sound, the team behind Tobe Nwigwe has, and continues, to outperform all expectations for what independent artists can accomplish.

The night opened with short performances by rapper Tim Woods and singers Luke Whitney and Madeline Edwards — all artist who have been featured on Tobe's popular The Originals singles. Incredibly talented performers in their own right, the opening acts proved that Nwigwe's movement is about more than just his own music. We may very well be witnessing the beginnings of Houston's most prominent creative partnerships. 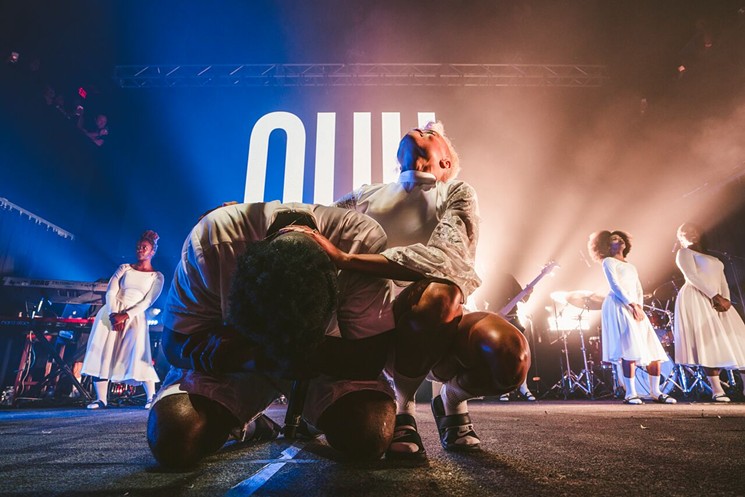 The evening's main event, much like all of Tobe's projects, was a shared stage of mutual support and love. While Nwigwe remained the undisputed star of the night, the show's co-star was undoubtedly the rapper's marriage to his wife, Fat. Tobe and Fat's relationship has played a major role in the artist's career, and the importance of that partnership was on full display during last night's show.

As a part of the event's incredible visual component, videos of the couple's journey were broadcast behind the stage as a major aspect of the show. Clips of their engagement and wedding ceremonies, along with images and candid scenes from their past year together, served as lead-in's to Tobe's single, "I Choose You"; leaving very few dry eyes among the sold out crowd of over 1,000.

Another relationship that Nwigwe made sure to highlight last night was his friendship with female producer LaNell Grant, aka Nell. Nell has produced every one of Tobe's virally successful The Originals singles, and is prominently featured in the videos for each one alongside Tobe and Fat. Another artist who's boat has been lifted by Tobe's rising tide, Nell is poised to become one of the city's most prolific producers thanks to her and Tobe's creative partnership.

Tobe Nwigwe performs "From the Swat"
Photo by Carlos Brandon

The show's finale was none other than the most widely successful single of Tobe and Nell's career. "I'm Dope", the tribute song to Erykah Badu and Dave Chappelle which was recently featured on an ESPN special about Lebron James, was the closer for a night that is certain to go down in Houston music history. What 1,000+ fans witnessed on August 19, 2018 at White Oak Music Hall was more than an outstanding concert; it was both the beginning of a new era for Houston music, and a fitting culmination to one of the most exciting local come ups this city has ever seen.

This author, for one, waits impatiently to see what comes next from Nwigwe and his ever growing camp of creative game changers.
KEEP THE HOUSTON PRESS FREE... Since we started the Houston Press, it has been defined as the free, independent voice of Houston, and we'd like to keep it that way. With local media under siege, it's more important than ever for us to rally support behind funding our local journalism. You can help by participating in our "I Support" program, allowing us to keep offering readers access to our incisive coverage of local news, food and culture with no paywalls.
Make a one-time donation today for as little as $1.