Tobe Nwigwe Returns To Houston With His Monumintal Tour

Tobe Niwigwe brogught his Monumintal Tour to 713 Music Hall Photo by Robyn Tuazon
“I feel like I Love my city,” exclaimed an out of breath Tobe Nwigwe as he stood center stage drinking a Pedialyte. Dressed in all mint and backed by five massive screens displaying waves of rolling clouds the Alief MC paused to catch his breath before addressing the roaring crowd at 713 Music Hall.

“I feel like this city has made me into every ounce of the man I am!”

In 2017 Nwigwe debut his album Tobe From The Swat with a party at Alley Kat alongside his girlfriend, Markita who he affectionally called Fat. Roughly four years later but only 2.5 miles away Tobe came home Sunday night to a packed house at the concert venue that is part of the downtown Post complex.

More than 5,000 people filled three stories to watch Tobe, his now wife Fats, his producer Nell, his musical family, and a string of special guests put on the Monumintal Tour. The tour is the culmination of the grass roots work the group has put in online performing many of the viral hits that they have cultivated with weekly videos and shows.

Starting with music from his Twisted Sunday’s series Tobe quickly began bringing out guests from his last release Cincoriginals. Royce da 5’9”, D Smoke, Mumu Fresh, Killa Kyleon, Paul Wall, Slim Thug, Lil Keke, Bun B, Cyhi the Prince, Trae tha Truth, and Young Deji all came together, dressed in mint, to celebrate Tobe’s return to the city. Niwigwe audience barely got a chance to catch their breath as he brought out guest after guest making sure his Houston crowd truly got to witness something special. 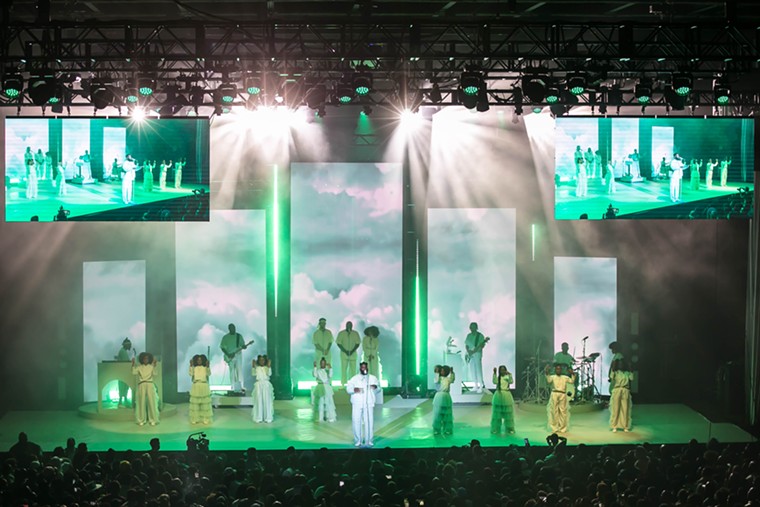 The Monumintal is an impressive stage show bringing all of the videos Tobe performances created over the past year to the live stage.
Photo by Robyn Tuazon
“I got a whole lot of songs,” he laughed taking a quick break between sets. “Everyone else on this tour only got half of what y'all are going to see tonight.”

What the crowd saw was a medley of new Houston music from Tobe as well as classic hits from his guests. D Smoke performed alongside his wife, Angelina Sherie, as she played the violin. Mumu Fresh sprang across the stage as she rapped and sang her verse for Tundah Fiyah. Throughout the show Houston legends would come out and perform album cuts and after Tobe would prompt them to perform old staples.

Paul Wall and Slim Thug joined forces to Still Tipping, Lil Keke danced to Southside, and Bun B ran through his verse from International Players Anthem. Overall the show felt like a homecoming for an artist who has embraced the do-it-yourself spirit of Houston artists before him and brought it into a new era. Before bringing out his “little brother” Young Deji for their remix to What They Say Now Tobe addressed the naysayers who doubted his group’s progress. 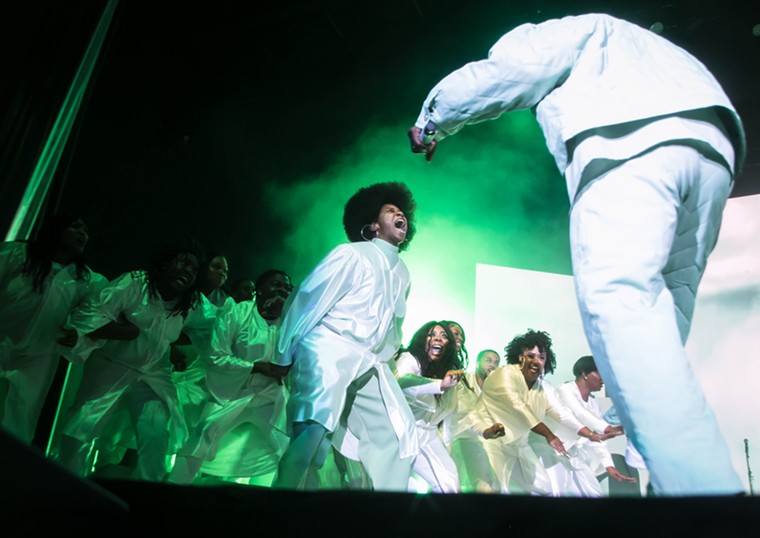 Tobe, Nell, and a Choir of dancers and singers opened the high energy show.
Photo by Robyn Tuazon
Tobe’s music encompasses his family and his show is no different reaching a high point when he brought his mother out to perform and speak with the audience. Dressed in a mint gown with matching Nigerian headwrap she stopped to address the crowd at the end of her performance.

“Your dream is in your hands,” she smiled as she looked proudly onto the crowd before turning her gaze to her son. “It’s not your daddy’s dream. It’s not your mommy’s dream. It’s yours.”
KEEP THE HOUSTON PRESS FREE... Since we started the Houston Press, it has been defined as the free, independent voice of Houston, and we'd like to keep it that way. With local media under siege, it's more important than ever for us to rally support behind funding our local journalism. You can help by participating in our "I Support" program, allowing us to keep offering readers access to our incisive coverage of local news, food and culture with no paywalls.
Make a one-time donation today for as little as $1.