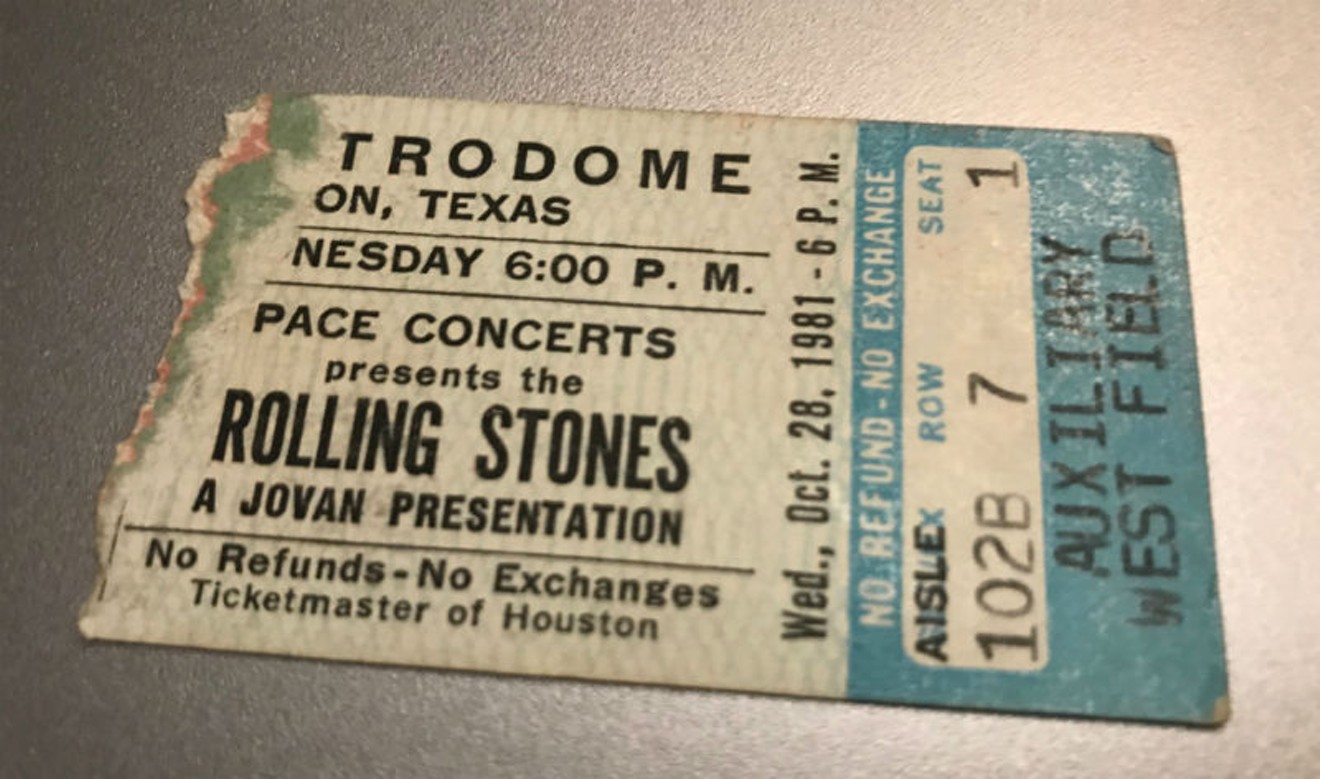 The Rolling Stones continue a long history of Houston shows when they return in April 2019 Photo by Jesse Sendejas Jr.

Sure, it's the end of the year and a review of the best concerts Houston hosted in 2018 might be in order and certainly would be easy to draw up; but, why not look ahead?  Here are ten shows we're excited to scribble onto  our calendars for 2019. Some are just around the corner, most already have tickets on sale and one may be nothing more than a pipe dream. Like Pokemon, we're trying to catch 'em all. Here's the rundown:

Fleetwood Mac hits Houston for the first time with its newly revamped, Lindsey Buckingham-less lineup. The band has been touring with new adds, Mike Campbell of Tom Petty’s Heartbreakers and Crowded House front man Neil Finn, since Buckingham was dismissed from its ranks last spring. They’ll still boast the considerable talents of Stevie Nicks, slated to become the first woman to be inducted twice into the Rock and Roll Hall of Fame about a month after the Houston date.

The band has been touring to mixed reviews since October. The Mercury News in San Jose said the group sounded “pretty tired” and called a November show there a flop. The L.A. Times considered an homage to the late Tom Petty during the show “kind of weird: a tribute to the dearly departed from a band that can treat its living like trash.” But plenty of reviewers have praised the new lineup and, after all, you're hearing beloved hits all night long. It’ll be interesting to determine for one’s self how much Buckingham’s absence affects a night that’ll be packed with classic rock favorites, many of which he penned.

If you’re lucky enough to know, you might recall the best days at AstroWorld were the ones that were so exhilarating and entertaining you couldn’t wait for the next visit. According to those who were there, Travis Scott’s Astroworld Festival at NRG Stadium last month was that kind of day for trap music thrill-seekers. Bringing a Toyota Center version of the tour to Houston in February, just days after what's sure to be a much talked-about appearance at the Super Bowl halftime show, will be a little like heading back to the park for another day of Houston-only fun.

The talented indie rocker has tiptoed around Houston for a while now, playing gigs in Austin and even in Dallas,  but the wait to hear her smart and catchy tunes live will be worth it when she arrives to White Oak Music Hall in a couple of months. She’s now got songs from a second full-length record to draw from since Tell Me How You Really Feel released last summer. It joins her breakthrough work, 2015’s Sometimes I Sit and Think, and Sometimes I Just Sit, along with cuts she crafted with D.I.Y. stylist Kurt Vile for 2017’s Lotta Sea Lice, so there’s plenty of catalog material for her to cull together an interesting set for lots of Houston fans catching her live for the first time.

The latest news about one of music’s all-time great divas is she recently broke a Spotify record for single-day streams – nearly 11 million on Christmas Eve. Music fans everywhere know there’s more to Mimi than what she wants for Christmas and bunches of them will cram into Smart Financial Centre to hear Carey belt out her best-loved tunes when she visits in March. No need to name them all, but as a point of reference, Mariah has more No. 1 Billboard hits than Taylor Swift, Prince and Bruno Mars combined. Her latest album, Caution, released last month.

The King of Country makes his 30th Houston Livestock Show and Rodeo appearance on March 17, the final night of 2019’s festivities. The show is special for more reasons than Strait's continued association with the rodeo, which dates back to 1983 and includes shows that have drawn more than 1.5 million attendees. This time out, Strait will perform a full-length concert, with no rodeo performance ahead of the set, which is expected to be be Strait's only Texas show in 2019.

If you’re the greatest rock and roll band in the world, you don’t need much advanced hype to announce your latest tour. Mick, Keef and the boys could have simply announced show dates and lucky cities and the concerts would still have sold out swiftly; but, why not have a little fun with it all, if you can, right? The band began hinting at tour dates last fall when its unmistakable lips-and-tongue logo started appearing on banners at and emails from stadiums which were tabbed to host shows on the Stones’ North American leg of the No Filter Tour. Once tickets were released to eager Houstonians, it was apparent the band has been missed mightily since its last appearance here in 2005. If you didn’t nab one, you can’t complain that the Stones didn’t give you fair warning.

"A thrillingly unreasonable band for unreasonable times," is how Pitchfork describes The 1975, the Brit rockers who released one of 2018's best reviewed albums, A Brief Inquiry Into Online Relationships. Being dubbed the millennial version of Radiohead might be heady territory for some bands, but front man Matt Healy and company have learned to own the acclaim and that's resulted in pushing boundaries and creating better music for their rabid and growing fan base. Healy's parents are actors and he's cited Taking Heads as a major influence, so it'll be interesting to see how the band's ambitious tunes play theatrically in the live show.

Fans of the 1990s rock act rejoiced when they learned the long-dormant group was reuniting and heading for the road in 2019. It’s been 25 years since Cracked Rear View, so it seems like a good time to honor the album, which is still among the top 20 best-selling albums of all time in the United States.  Front man Darius Rucker has forged a successful country career since the band took a break over a decade ago, but word is new Hootie & the Blowfish music is imminent, so this is more than just an anniversary cash grab. Just in case “Let Her Cry” and “Only Wanna Be With You” don’t evoke enough turn of the century moments, Barenaked Ladies will be on hand to open the show.

The Rhapsody Tour is the latest vehicle designed to deliver the legacy of Queen on to new generations of fans. The band biopic and global phenomenon, Bohemian Rhapsody, has stoked new interest in the group, which has been at it for nearly a half-century now. New fans will be eager to hear the songs live and they can thanks to Adam Lambert, who has the full confidence of his groundbreaking band mates and handles Freddie Mercury’s blueprint vocals comfortably and capably. Purists are bound to balk at the idea, but this version of Queen has already toured Houston and to great accolades – and, that was before the band was the subject of the biggest musical biopic of all time. 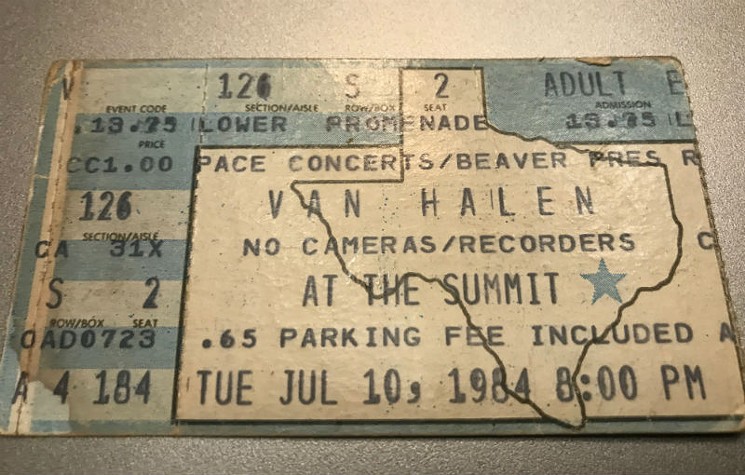 It’s too early to know when or if this tour will actually occur and even if it does whether it will ultimately hit Houston; but, if it does, it will be a treat to follow and possibly attend since recent rumors suggest the band will regroup with all four original members, including vocalist David Lee Roth and bassist Michael Anthony. Anthony has been estranged from the act since 2006 and Roth has been through the band’s revolving door too many times to count, but the band in its original formation hasn’t toured together since 1984. That would make this rumored tour 35 years in the making. Of course, it may never happen since loose lips have sunken Van Halen’s ships over the years and these reunion rumblings come from Roth, the top torpedo of all things Van Halen.
KEEP THE HOUSTON PRESS FREE... Since we started the Houston Press, it has been defined as the free, independent voice of Houston, and we'd like to keep it that way. With local media under siege, it's more important than ever for us to rally support behind funding our local journalism. You can help by participating in our "I Support" program, allowing us to keep offering readers access to our incisive coverage of local news, food and culture with no paywalls.
Make a one-time donation today for as little as $1.