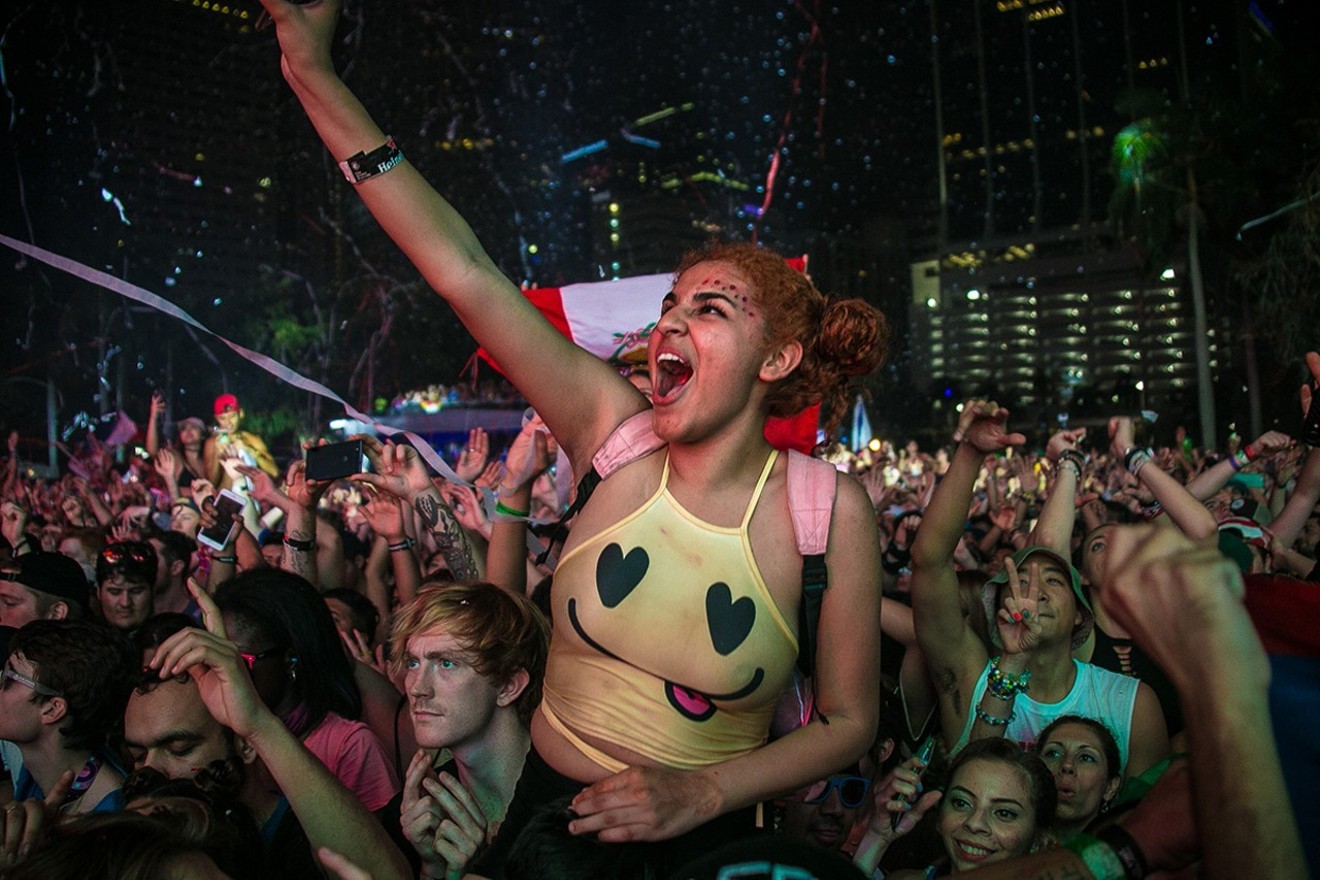 Photo by George Martinez
Note: This article comes to us from our sister publication Miami New Times.

Sunday night, Miami's Ultra Music Festival let downtown know that its three-day party was over with a fireworks display at the end of DJ Snake's set on the main stage. Condo-dwellers breathed a sigh of relief knowing they would finally be free once again to roam the city.

Still, it's an impressive feat that a festival of Ultra's size can come together in such an organized fashion in a small park. Over the years, law enforcement has really improved the experience for everyone attending and made the experience for nearby residents a little less painful. (Or maybe not, but here's hoping.) Now that New Times has washed off the mud and gotten a bit of rest, it's time to look back at the weekend and go over the highlights and lowlights of Ultra 2017.

Photo by George Martinez
Justice
Ultra's perennially overlooked Live Stage had its share of notable moments, but none were more invigorating or impressive than Justice’s closing set. Sure, Underworld put on an excellent technicolor set filled with career favorites and choice new cuts, and we’d be remiss to neglect the Prodigy’s bonkers Saturday-night performance. But Justice was something else. As one astute onlooker noted, Justice’s new live show took the admittedly impressive moving parts of the Carl Cox tent and ground them down into a focused, more impactful display.

The electro-house duo's mix was an hour-long flurry of surprise and awe: “Oh, cool, they’re surrounded on both sides by Marshall speakers; that’s nothing new from them — oh, wait, they’re lined with LEDs! The moving parts over their heads are pretty impressive too — oh, shit, there’s seemingly no direction they can’t move in!" Justice significantly stepped up its game, whether on the Live Stage or off. Cake-throwing is dead; long live the LED cross, multidirectional platforms, wood-finished synthesizers, and audience-engulfing lights. — Zach Schlein

Photo by George Martinez
National Pride
As far as Ultra fashion goes, flags from around the world have been as commonplace as body glitter and nipple pasties. Still, this year, there seemed to be an inordinate number of flags. Canada, Chile, Mexico, Japan, Sweden, the UK, and many, many other nations were represented. One can’t help but wonder if this upswing in national pride is a reflection of what’s happening in the world as conservative politicians steadily rise in power both in America and across Europe. Isolationism is spreading like a disease. At the very least, in addition to instantly turning all wearers into superheroes, the flags came in handy as improvised ponchos during the rain showers. — Angel Melendez

Photo by George Martinez
The Live Stage
For many years, New Times' biggest gripe with the Live Stage has been the noise bleeding from other nearby venues. So when Ultra announced the lineup this year and the dreaded 7Up stage was not listed, it was definitely good news. For years, that location has led an all-out audio assault on all others, with the Live Stage taking the brunt. However, this year, Ultra kept 7Up clear of performances. It served only as a link between the Live, Worldwide, and Main Stages. And, yes, noise from the UMF Radio stage could still be heard from the amphitheater, but overall, it was a remarkable improvement over past years. — Jose D. Duran

Photo by George Martinez
Ultra Ponchos
For better or worse, the torrential downpour that defined Saturday evening and the light trickle of Sunday afternoon afforded Ultra an opportunity to promote its own brand — not that it's needed — and make a little extra money on the side in the form of poncho sales for $5 apiece. They were necessary, they were widespread, and they’ll no doubt be remembered as a defining feature of this year’s festival. — Zach Schlein

Photo by George Martinez
The Resistance Brand
Whether it's Ultra's attempt at future-proofing itself to the turning tides against EDM or just an expansion of its global empire, there's no doubt that the sub-brand Resistance has been Ultra's most ingenious offering. What debuted in 2015 as a single stage has now taken over two stages at the flagship event. Resistance also has a presence at Ultra's other global events. It became a standalone event last year in Peru and will travel to Ibiza for Sasha & John Digweed's residency at Privilege this summer. Could Ultra eventually spin Resistance off into its own festival in the future? Seems possible. — Jose D. Duran

Donald Trump’s Presence
Trump is the president of the United States of America — he’s in the news a lot. Trump is a serial liar, an admitted sex offender, and an easily manipulated blowhard whose decisions carry significant weight not only for Americans but also for the world. He’s inescapable. One of the great many things about festivals like Ultra is the opportunity to experience a positive and safe release from the stresses and worries of day-to-day life. For any demographic that isn’t middle- to upper-class white male Americans, Trump’s presidency has significantly amplified those anxieties.

His presence at Ultra, whether in the form of questionably ironic vaporwave tees or “Make America Rave Again” hats, was deeply unsettling. Electronic dance music’s origins lie with innovation and creativity forged from suffering in American LGBTQ+ and ethnic communities; let’s not sully a beautiful, transcendent form with an upsettingly human and reliably horrifying being. — Zach Schlein

Photo by George Martinez
Gate Crashers
Since Ultra ramped up security a couple of years ago after the infamous incident that injured a security guard, gate-crashing hasn’t been much of an issue. But there's always that one guy. Sunday night, at the tail end of the festival, a cheeky spider monkey of a man, shirtless and amped up, tried to run past security to hop the fence near the UMF Radio Stage. He was met by hard concrete and cold steel as a team of cops tackled and cuffed him almost immediately. One of these days, people will learn. OK, no, they won’t. — Angel Melendez

Photo by George Martinez
People's Ears
Seriously, kids! Learn to wear earplugs. Ultra even shipped a free pair to everyone who purchased a ticket. If your ears are still ringing, they might already be damaged. New Times definitely noticed plugs on a lot of people, but they tended to be older (perhaps wiser) or working. Younger festivalgoers' naked ears were exposed to decibels that could lead to permanent hearing loss. Also notably absent was the University of Miami Health System, which provided free plugs and education on the effects of repeated exposure to loud noise. It would have been nice to see it return and have its presence expanded. — Jose D. Duran

Bladders
Were there fewer toilets? It sure felt like it. The queues seemed longer, and an entire section of portapotties near the main stage, just behind the main thoroughfare, at last year's fest was nonexistent this year. That meant the closest options were next to the Carl Cox Megastructure or near the Arcadia Spider stage. Sure, there was the stairwell at the center of the fest, but the booty fumes were overpowering — accentuated by body heat and moisture. — Angel Melendez

Photo by George Martinez
The Oasis and Biscayne "Stages"
Inside the main merchandise complex, next to the Heineken pop-up, was a stage for DJs. While salespeople were busy trying to do their jobs, a man pumped unbearably loud music into their faces, causing some jittery fans to break out into dance while waiting in line. This was your Oasis "Stage." Outside, directly across from the exit to the festival, was a small, depressing stage hidden by a pizza stand and overshadowed by the gargantuan Main Stage.

Anything DJs played on this tiny stage sounded tinny and pathetic as they got drowned out by David Guetta’s terrible remixes. This was the Biscayne "Stage." Why these pockets of sadness existed is a mystery, but they did, and they had no place at the festival. Please, Ultra, make them go away, and we’ll pretend they never happened. Promise. — Angel Melendez