Micah Edwards On the Particular Brilliance of “The Christmas Song” 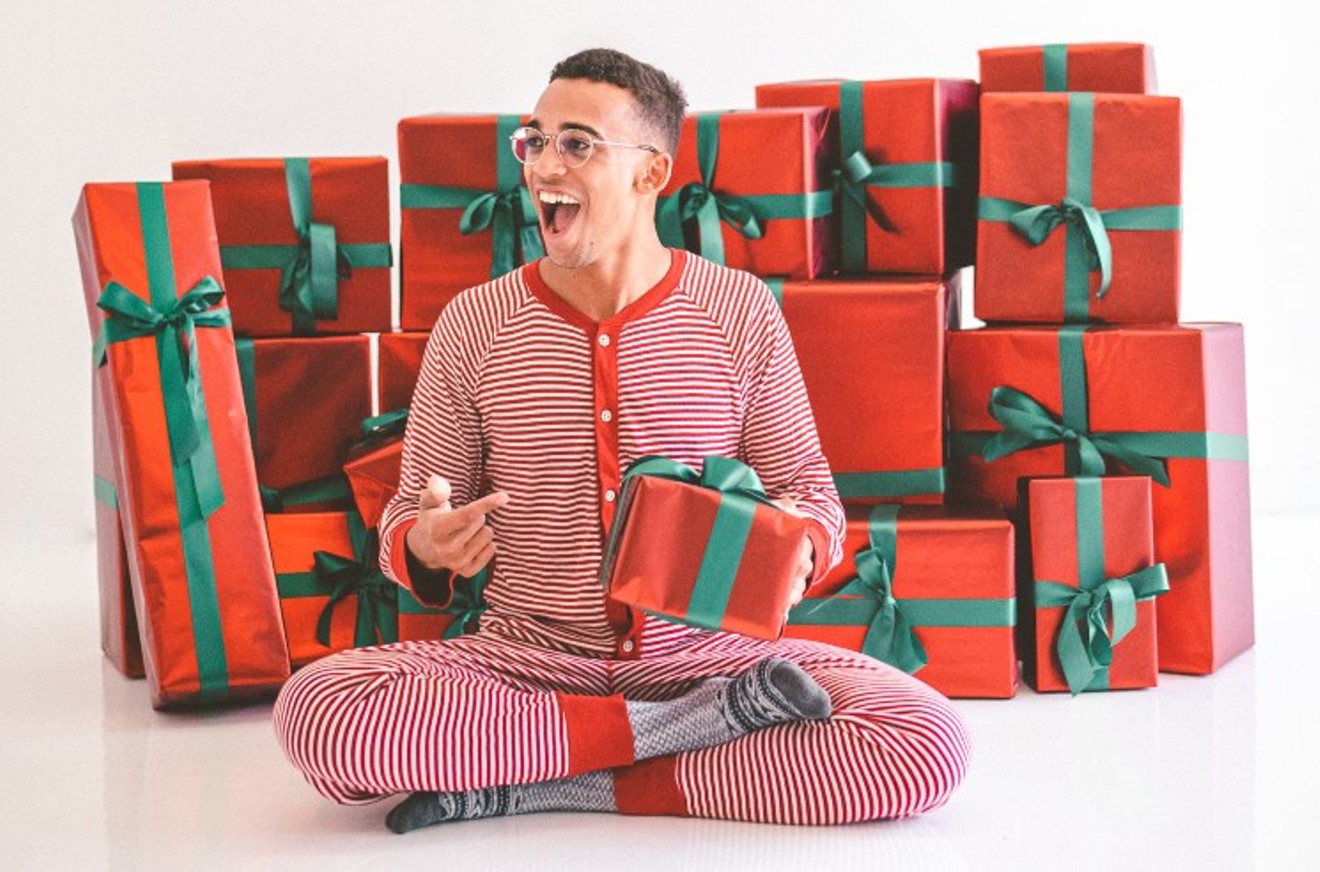 
There’s no such thing as a perfect song, but certain songs might seem perfect to certain people. What are the reasons anyone might find a song particularly brilliant? That’s the simple question posed to musicians and music fans in this new Houston Press feature. The answer to that question is complex and diverse as those who’ve agreed to share their thoughts on the particularly brilliant songs they’ve selected.

Micah Edwards is uniquely qualified to discuss the perfect holiday song. For one, he said every Christmas his mother would transform his Humble-area childhood home into a winter wonderland. As a teen, he and his four siblings, who all boast a knack for all things musical, would travel to nursing homes to sing Christmas carols for the residents. He described their troupe as “a Jackson 5/von Trapp type thing.” Drawing from such a merry, merry background, Edwards recently released his own holiday song, “December 26.” The track has garnered some serious attention from major media outlets like Huffington Post and periodicals like Parade magazine, which listed “December 26” as one if its “Best New-ish Christmas Songs” alongside tunes by names like Dolly Parton, Katy Perry and Ariana Grande.

So, yeah, Edwards knows a thing or two about Christmas music. His own contribution to the genre came to life on a hot day in July, as did his choice for the perfect holiday song.

“I love this question because I could talk a long time about this,” he said. “It’s funny. Mel Tormé wrote ‘The Christmas Song’ on a beach in the summer, so already there’s kind of a little parallel. But Nat King Cole’s ‘The Christmas Song,’ in my opinion is the most perfect Christmas song. It’s literally called 'The Christmas Song.' All you need are those first two jazz guitar chords and you’re already in the Christmas mood.”

Tormé conceived of his Christmas classic sometime back in the mid-1940s. Cole and his band first recorded the song in 1946 and again in 1961. That later cut is considered its definitive version and, according to BMI, it is the most-performed holiday classic of them all.

“Nat King Cole – his voice is like a hot toddy, it’s like an apple cider going down your throat on a cold day,” Edwards said. “He already is probably my number one inspiration, he’s so smooth, just debonair, he was the best. But ‘The Christmas Song,’ the lyrics altogether are so classic, Nat on it is so classic, the arrangement, the instrumentation. It’s hard for me to come down to one, but in my heart I know it’s Nat King Cole’s ‘The Christmas Song.’”

Only time will tell if Edwards’ own entry to the Christmas music class will endure like “The Christmas Song.” It has a good chance. It’s got a good-hearted vibe, a timeless message, an earworm catchphrase and Edwards’ like-butter vocals. He’s happy to know it has resonated with so many listeners in such a difficult year.

“I had no intention of releasing a Christmas song this year,” he admitted. “For some reason, inspiration struck in the middle of July and I had the idea of ‘One, double two, six,’ and I was thinking, ‘Well, that’s catchy, that’s cool. I’m like, what does that even mean?’

“I love Christmas so much, it’s my favorite time of the year, and I hate that feeling when I wake up on the day after Christmas and feel like I didn’t get to enjoy it to its fullest,” he continued. “I feel like my schedule and calendar are so booked with me being a musician, it can get booked with parties and work and just stressful things that we feel like we have to do every year, but really, when we wake up that morning we feel like we didn’t really get to enjoy it. That feels like it’s super close to my heart so I just kind of ran with that ‘One, double two, six’ idea.”

Just as Tormé had co-writer Bob Wells for “The Christmas Song,” Edwards brought in fellow area songwriter Tim Qualls to round out the tune. They took the track to Ty Robins who helped with production.

“I always say this, but I feel so blessed to be supported by my band and the creatives that I get to work with. We worked on the song from August to October and it really felt like a Christmas party every single time we hit the studio,” Edwards said. “A lot of the sessions I would bring in hot chocolate and Irish whiskey and cookies and I would kinda make it feel like Christmas in September. And it was just a really fun experience because what the song is all about is being with the people that you love most and the sessions really felt like that.”

“Christmas is a great time. I had to ask myself the question back then while writing the song, why is Christmas even important to me? And what it came down to is I get to see all my family in one room and that’s a beautiful thing.”

Edwards said he is the oldest boy among five siblings. He was born in California and arrived in Houston as an eight year-old, “so I’m a Texan, I claim it.” His sister, Madeline, is also a burgeoning Houston musician who's been featured on NPR’s Live Sessions and has shared the stage with Jordin Sparks and Tobe Nwigwe. Micah said his younger brother, Jonah, is also pursuing music as a career.

Edwards said he began playing in bands in high school but put his passion on hold to play baseball at the University of Houston, where he ultimately earned a master’s degree. His career plans took a turn one afternoon when he philosophically pondered where he was going.

“It was the last semester of my grad program and it was literally like a movie, it was as dramatic as I’m about to describe it. I was sitting in my office chair, I had a nine-to-five marketing job, that’s what I got my degree in, and I looked out the window and I saw a plane in the distance in a clear blue sky and I thought to myself, ‘Man, I wonder where that plane is going?’ I wonder what I would be doing if I was on that plane?’ And that’s when it hit me, if I’m asking these questions at 23 then something’s gotta give,” he shared. “I realized I wasn’t going to be content with just that nine-to-five thing that early on in my life. I’d just got married. I knew within myself that I had to pursue music. It was early 2019. I quit my job, I pursued music full-time both in recording and as a career and I’ve been doing that ever since.”

Edwards said his wife has been “super supportive” and with others in his corner he made strides in 2019, releasing music on Bandcamp and performing several Sofar Sounds and Pan Dulce HTX shows. He’s played area steakhouses and private events and “I also have a country wedding band, we’re called the Honky Tonk Revivalists, and that’s really just a means to an end. It’s fun. I love country music, we do like classic country music.”

“I’m sure this is going to be the story for every musician in 2021, but my goal is to do a lot more shows in the new year. I don’t know what the climate’s gonna be like, hopefully it’ll improve a little bit for musicians but that is at the very top of my list,” he said.

Speaking of lists, how about the ones which have “December 26” rubbing elbows with songs by some of the recording industry’s top names?

“It’s very humbling. Obviously, I felt very good about this song, I believe in it a lot. Every artist really believes in their work, hopefully, so in my gut I knew it was gonna do well, I thought it was gonna reach a lot of people and speak to a lot of people,” he said. “The response that it’s been getting has been really overwhelming, really humbling to be on lists with Dolly Parton and Kelly Clarkson and Chris Stapleton.

“After release, I’ve been very, very happy with the response,” he said. “People send me videos of them playing it in their homes now, jamming to it in their car and that’s what it’s all about to me, like that’s my measure of success, knowing that people are enjoying it in their everyday lives, bringing it into their homes to their families, that really just brings me so much joy.”

Edwards said if his song helps families foster a love for the holiday and grow closer through it, he’s come full circle.

“My mom is the reason I love Christmas so much. She turned our house into a kids’ fantasyland. It was awesome. Growing up, I realized she’s actually a Christmas hoarder but as a kid it was a little more charming than that,” he laughed. “She has so many Christmas things and she made sure to play all the classics and show us all the classic movies. She made it a very, very special time of year. She came up with all these traditions we would do every year and it was all very normal to me. Once I got married and kinda grew up and saw how other people do Christmas I realized how special she made sure to make it for all of us.”

Those special times helped create a special song, one that’s currently flying higher than Santa’s sled. Will it someday be as revered as “The Christmas Song?” Edwards is excited about the prospects.

“It’s humbling and I can’t wait to see what else the song is going to do. That’s what’s cool about Christmas songs. They don’t really die in January because they’ll just come back to life the next year. So, we’ll see what happens.”
KEEP THE HOUSTON PRESS FREE... Since we started the Houston Press, it has been defined as the free, independent voice of Houston, and we'd like to keep it that way. With local media under siege, it's more important than ever for us to rally support behind funding our local journalism. You can help by participating in our "I Support" program, allowing us to keep offering readers access to our incisive coverage of local news, food and culture with no paywalls.
Make a one-time donation today for as little as $1.