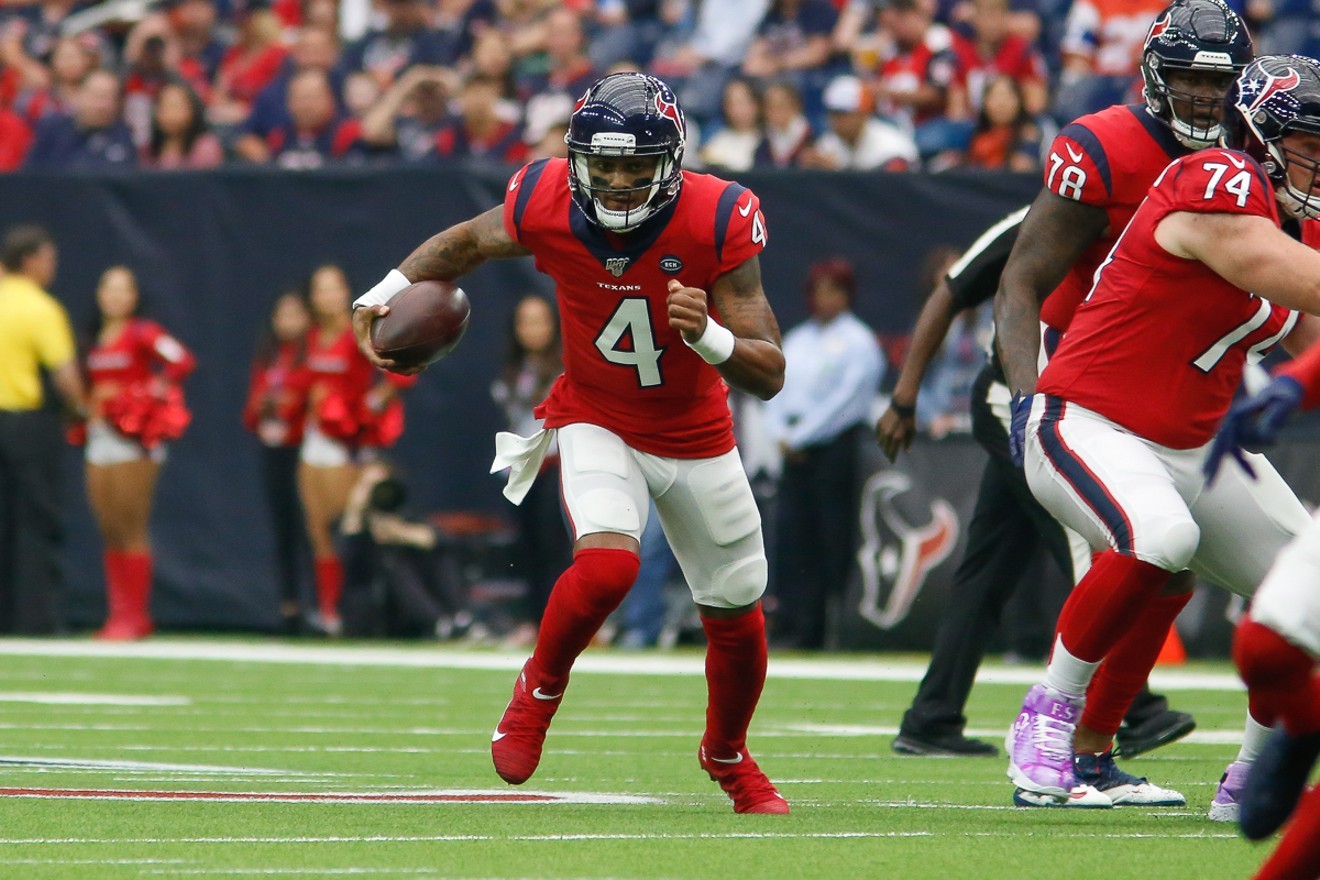 Deshaun Watson's troubles seem to be never ceasing. Photo by Eric Sauseda
The Deshaun Watson legal saga has been ongoing for nearly 15 months now, and not once has it felt like the end of all of this was near. Hypothetical timelines had been floated, but if Watson is going to fight all of these plaintiffs in court, those timelines are in years, not weeks or months. When the pool of plaintiffs was seemingly contained at 22 total, we could forecast how long this all might go on.

However, with the 24th lawsuit filed on Monday this week, we were presented with new allegations and one harrowing new wrinkle that should shake Browns fans to their core. We will lay all three of those out in a moment but first, for those who haven't read the 24th lawsuit filed against Deshaun Watson, here it is in PDF format:


OK, now for the three very disturbing aspects to this new case:

1. This lawsuit alleges that Watson has approached over 100 massage therapists on Instagram
Here is the exact verbiage outlining this in the lawsuit filed by Tony Buzbee on behalf of Katy Williams, the 24th plaintiff to sue Watson:


“Defendant Deshaun Watson has a disturbing pattern of conduct,” the complaint contends. “Each of the cases against him is strikingly similar, evidencing a habit or custom: Watson seeks out random strangers on Instagram, as he has done more than a hundred times.”

This is the first time I can recall the sheer volume of prospecting Watson did on Instagram  quantified in such a dramatic way. The way this excerpt reads, it doesn't sound like Watson secured massages as a result of each of these individual efforts, nor does it say that each effort of "seeking out" was toward over 100 different people.

What it does highlight is the fact that there may be a whole lot more women out there with a similar Deshaun Watson story to what the 24 plaintiffs so far have put forward. That unknown frontier of potential accusers is something that the Browns would have been completely stupid to ignore — to be clear, the Browns may very well be stupid — and assuming they took it into account, their calculus would seem to indicate they were comfortable with the likelihood of more accusers coming forth.

Unfortunately, for the Browns the unknown frontier is upon them because here was Rusty Hardin's statement following the 24th lawsuit on Monday:

Wow. A brand new accuser with zero history for the defense to cite, and no backstory to even begin to use in playing defense on behalf of Watson. This takes me to the other two terrifying things for Browns fans and Deshaun Watson's camp.

2. This accuser could likely still file a criminal complaint
Two grand juries in the Houston area, one in Harris County and one in Brazoria County, gave a verdict of "no bill" for Watson against a total of ten criminal complaints (nine in Harris, one in Brazoria) back in March. This was the trigger mechanism that led to the land rush for Deshaun Watson's services that ultimately ended up with him in Cleveland. Presumably, Rusty Hardin and his team would have known the identity of all ten of those women who complained to police about Watson. So this means that Katy Williams, the newest plaintiff, was NOT among those who filed a criminal complaint. Now, it is her right to do so, and if she does, this opens up the criminal can of worms for Watson all over again. Filing a complaint could mean another grand jury has to assess the case, and this time, perhaps Watson gets indicted. This is already veering toward disaster for Cleveland, even if Watson plays in 2022, but a criminal indictment of Watson would be the most Browns thing ever.

3. Where does it end?
Finally, this latest lawsuit, and the completely new accuser as someone who's never shown up on any grid for Watson's legal team is a stark indicator that Browns fans will never be able to sleep, so long as Deshaun Watson is their quarterback. Buzbee claims Watson has sought out hundreds of massage therapists on social media. The pool of KNOWN women who'd worked on Watson previously has been around 45 or so, between plaintiffs, Watson backers (18 of them gathered by Hardin to fight the P.R. fight), and a few other stray women who've spoken publicly.  These latest developments leave open the possibility that there are dozens of these women, with similar allegations, lurking in the weeds. This is now your life, Browns fan. Enjoy it.

And thanks for the three first round picks, Andrew Berry.


ESPN's Adam Schefter reports the Browns will send three 1st rounders, a 3rd rounder and possibly a 5th rounder to the Texans for Deshaun Watson.

If that's true, let's see if the Texans give Lovie Smith real talent and, more importantly, the proper time to work with it. IYKYK ✊🏾 pic.twitter.com/a9hs6ibE7N