Dissecting the Mystery of Houston's Loop Freeways for the Uninitiated 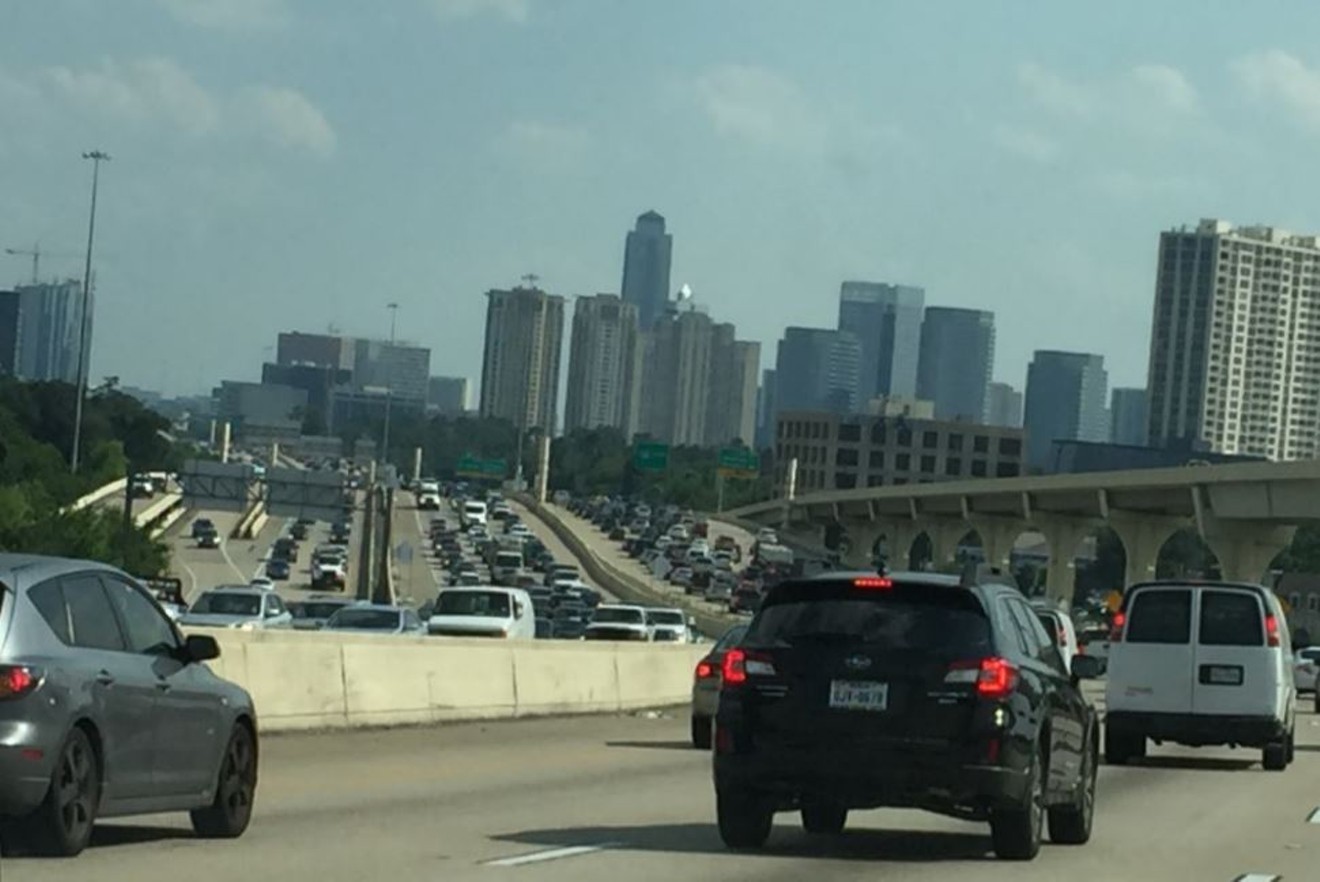 This is the scene pretty much every day on the West Loop. Every damn day. Photo by Zach Despart
Recently, we tried to provide some semblance of understanding of our freeway system to those who weren't overly familiar with it We stuck with the big highways. But, understanding Houston driving is about more than figuring out the roads that take you to and from the center. Knowing the roads that encircle it is just as important and growing more so as they expand along with the city.

Nickname: The Loop
Type of Drivers: Depends on the section, but they are all annoyed.

For decades, "the Loop" has been a sort of dividing line between urban Houston and the 'burbs. Inner Loopers have been at odds with Outer Loopers for as long as anyone can remember and even living a few blocks outside the Loop is supposedly like the difference between some bohemian utopia and a McMansion. That is all changing as the city's urban landscape changes, but there is still a level of smugness that comes with the phrase "I live inside the Loop." The now-defunct Houston Metropolitan Magazine once did a comparison between them suggesting the pets of outer loopers were commonly a pair of matched Labrador retrievers while  those inside the Loop cared for ten leukemia-riddled cats.

Nevertheless, the 610 Loop is one of the best ways to get around the expanse of Houston without ever going directly into the heart of darkness. The most God-awful stretch is the West Loop between I-10 and I-69 near the Galleria. Not only is it always filled with cars (even at two in the morning), but the interchange at I-69 is about to undergo a massive overhaul. If you work in that area, we are praying for you.

Nickname: The Beltway
Type of Drivers: People scrambling for change and people with EZ TAGs laughing as they whiz by.

The Beltway, by many estimations, is becoming the new Loop. In many areas, it is near or at the border of the city limits, but given the remarkable growth of Houston (and our ample willingness to drive for hours on end), it is becoming a much more common route for commuters, particularly those who lived in what used to be considered the outer suburbs. Ask anyone who was diverted onto another freeway when water covered a section of the Beltway near I-10 after Harvey. Suddenly, traffic swelled on nearby roads exponentially.

A significant portion of the Beltway is a toll road meaning you'll have to stop every once in a while and pay the fiddler (i.e. TxDOT), but you can get an EZ TAG for your window or even via app so you can buzz through those lanes sipping espresso while the peons with their pennies rot in the cash only lane.

Perhaps only a decade ago, the Beltway might have seemed like a ridiculous way to divide the city from urban to suburban, but now that it completely surrounds what is a quickly growing urban area, the "new Loop" has become a commonly-used freeway for even the haughtiest of inner Loopers.

Nickname: The Grand Parkway
Type of Drivers: Anyone who really, REALLY wants to avoid getting close to downtown.

Imagine you are one your way home from, let's say, San Antonio. You had a nice relaxing, long weekend. You even took Monday off and you're arriving back in town Monday evening. You check your Google Map and I-10 is dark red, like it was stained by the blood of drivers fighting for position. You live in Spring. What do you do? Good news. You hop on Highway 99, more commonly known as The Grand Parkway. It sounds like some glorified fairy land, but it's really just a bunch of concrete mostly in the middle of nowhere (until developers build all over that too).

Taking the Grand Parkway will circumvent the traffic ahead in these circumstances. Of course, if you are coming in from New Orleans or Galveston, you are out of luck because this loop is still just a semicircle awaiting completion. That's still years away, but at least you have this stretch which runs from Sugar Land to Spring.
KEEP THE HOUSTON PRESS FREE... Since we started the Houston Press, it has been defined as the free, independent voice of Houston, and we'd like to keep it that way. With local media under siege, it's more important than ever for us to rally support behind funding our local journalism. You can help by participating in our "I Support" program, allowing us to keep offering readers access to our incisive coverage of local news, food and culture with no paywalls.
Make a one-time donation today for as little as $1.