Abbott Vows No More Shutdowns As Pandemic Rages, While Widespread Vaccines Are Months Away

Gov. Greg Abbott promised no more Texas shutdowns, even though vaccines won't be easy to get for months. Screenshot

In a Thursday morning press conference outside of the UPS Distribution Center in Austin, Gov. Greg Abbott gave an update on the state’s coronavirus vaccine distribution program before he vowed that there will be “no more shutdowns” in Texas despite the still-raging pandemic.

Abbott said that around 95,000 doses of Pfizer’s recently approved vaccine have already been shipped out across Texas, and that an additional 129,000 doses will be heading out on UPS delivery trucks today.

Texas’s frontline healthcare workers were chosen to get the vaccine first since they are “the warriors at the tip of the spear, working around the clock, sacrificing their own lives for the health and safety of their fellow Texans,” Abbott said. Residents and staff at nursing homes and other long-term care facilities are next in line; the Department of State Health Services previously announced that those vaccinations will begin starting December 28. 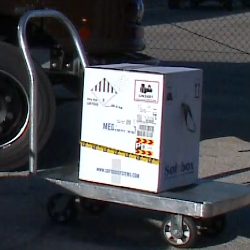 Boxes of Pfizer's vaccine are headed out on UPS trucks across the state, packed in dry-ice to keep the vials at their required low temperatures.
Screenshot
Abbott also said that both Texas and every other state are likely to start receiving shipments of Moderna’s COVID-19 vaccine as well, which the U.S. Food and Drug Administration is expected to approve any day now. By the end of December, Abbott said he expects that over a million doses of the vaccine will have been delivered throughout the state.

Abbott said he plans to get the vaccine eventually, and that even though the currently available vaccines have been proven to be safe and highly-effective (about 95 percent effective for the Pfizer vaccine), the state will not require Texans to take it.

“We always want to make clear that vaccines are transformational, but there are some people who do not want them, and so vaccines in the state of Texas are voluntary, never required,” Abbott said.

As for when the majority of Texans will be able to waltz into their neighborhood pharmacy and get vaccinated, Abbott insisted he thinks that could happen as soon as early March, which he said would depend on Pfizer and Moderna upping their current production levels, as well as other vaccines from different providers being approved by the FDA.

But DSHS Commissioner Dr. John Hellerstedt didn’t sound nearly as bullish as his boss did when asked about Abbott’s early-March estimate for when most Texas residents could expect to easily get a coronavirus vaccine.

“I think it’s within the span of what we think is reasonable on what can occur,” Hellerstedt said tepidly, without providing any additional details.

Even though new COVID-19 cases, deaths and hospitalizations have been surging for weeks across Texas, Abbott said that since Texas hospitals haven’t been completely overrun and due to the arrival of new COVID-19 treatments and vaccines (even though they’re far from widely available and won’t be for months), there’s no way he would even consider approving any new business shutdowns to help slow down the pandemic, even though experts predict that this winter will be one of the deadliest periods of the entire pandemic.

Abbott referenced how more drastic lockdowns in California weren’t able to totally prevent the spread of COVID-19 (without acknowledging that they surely helped minimize it), and stressed that he wouldn’t entertain any new business closures in Texas.

“It is time to put behind us shutdowns,” Abbott said. “No more shutdowns. We need to focus on opening up businesses.”

Abbott then reiterated one of his most consistent talking points throughout this whole crisis: it’s your own fault if you’re an adult Texan who gets COVID-19, so don’t go running to the government for help.

“One thing that we know today is that every adult in the state of Texas knows exactly what COVID-19 is,” Abbott said. “They know how to protect themselves from it. They know how to prevent spreading it. Every adult in Texas has the responsibility to follow the safe practices as we continue to work our way out of this. If they do that, we can contain COVID-19 while we continue the process of vaccinating our fellow Texans and continue to open up.”

“People’s lives have been crushed,” he continued, “and their pocketbooks and their ability to pay the rent and put food on the table has been harmed because of the shutdowns, and so no, we will not have any more shutdowns in Texas.”
KEEP THE HOUSTON PRESS FREE... Since we started the Houston Press, it has been defined as the free, independent voice of Houston, and we'd like to keep it that way. With local media under siege, it's more important than ever for us to rally support behind funding our local journalism. You can help by participating in our "I Support" program, allowing us to keep offering readers access to our incisive coverage of local news, food and culture with no paywalls.
Make a one-time donation today for as little as $1.