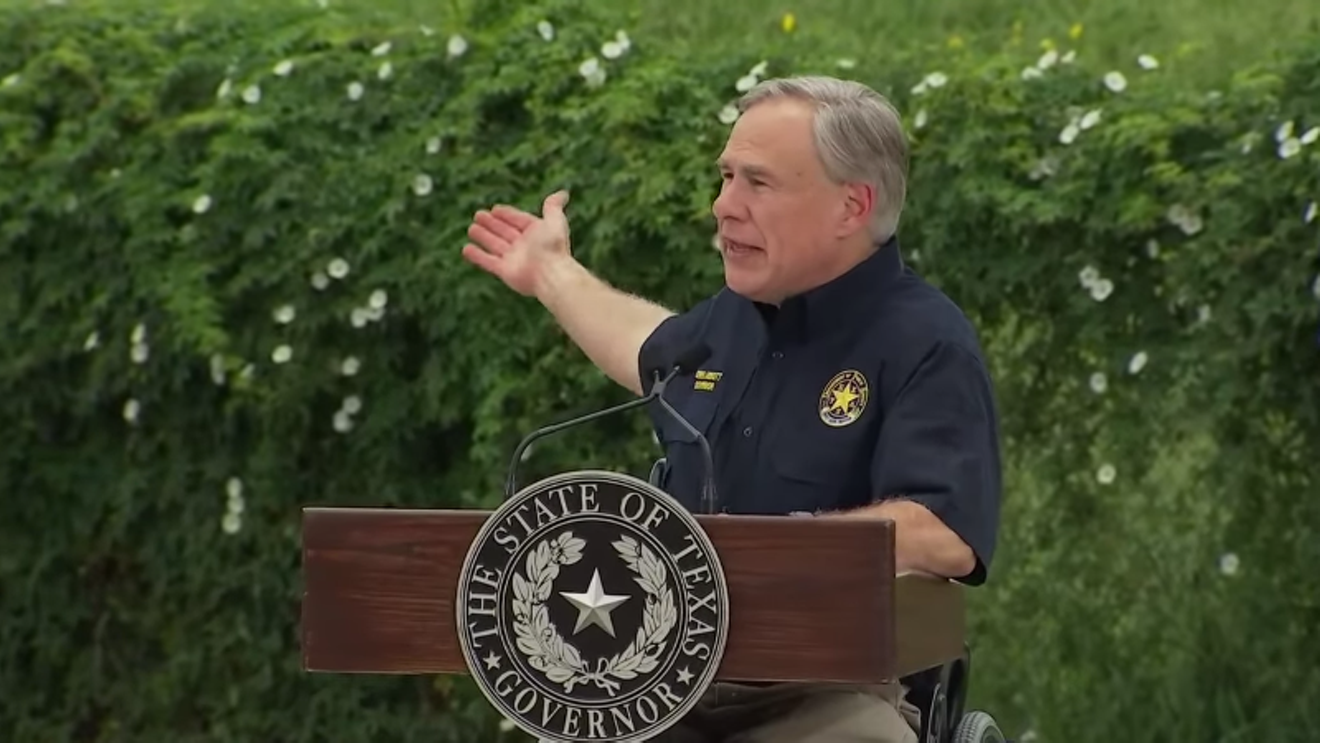 Gov. Greg Abbott has brought Republicans and Democrats together — to accuse him of abusing his powers, that is. Screenshot
Gov. Greg Abbott has faced plenty of backlash after he vetoed two full years of funding for the Texas Legislature last month, his way of retaliating against state lawmakers who weren’t able to pass a Republican priority bill to make voting in Texas more difficult after foot-dragging from Republicans created an opening for a late-night, end-of-session walkout from Democrats that killed the controversial election law.

While Democrats have been clamoring over Abbott’s decision to cut funding off for a whole third of the state government, multiple Republicans joined the fray in recent days, headlined by the once formidable Texas House Speaker Joe Straus.

Abbott isn’t just taking blows from moderate Republicans like Straus; He also earned himself a new primary challenger over the holiday weekend in Allen West, the former Florida Congressman and Army veteran who in early June abruptly quit his gig as Chair of the Republican Party of Texas after a scant 11 months on the job. Apparently West thought his old job would keep him too busy to focus all his firebrand energy on Abbott, whom he claims is — get ready — insufficiently conservative to lead the Lone Star State.

Back on June 25, the Texas House Democratic Caucus and a group of legislative staffers predictably filed a lawsuit with the Texas Supreme Court asking the state’s judicial branch to override Abbott’s legislative funding veto, claiming it would be an unprecedented attack on the idea that each of Texas’ three branches of government should check and balance one another.

No one was surprised when the state Democratic party chairman Gilberto Hinojosa touted the move as fighting against “a blatant power grab that is not in the bounds of his jurisdiction,” despite protestation from Abbott’s office that “The Democrats’ claims about the governor’s veto ‘cancelling’ the legislative branch are misleading and misguided.”

Nor was it a shocking development when Texas Attorney General Ken Paxton issued guidance Monday arguing that “The Governor properly exercised the veto power bestowed upon him by the Texas Constitution and acted consistently with this Court’s precedent.

What did raise eyebrows was when Straus was joined by fellow former Texas House Speaker Pete Laney (the last Democrat to hold the gavel) as well as fellow Republican and former Lt. Gov. Bill Ratliff in issuing a brief to the state supreme court opposing Abbott’s legislative funding veto.

In their brief filed Monday, the three former state officials contend that “The Governor has used his veto power to render inoperable a coequal branch of government,” and urged the state supreme court “To preserve Texas’ commitment to separate, coequal branches of government” by blocking Abbott’s veto.

“This action should be rebuked by people of all political persuasions,” the brief read.

Current Texas House Speaker Dade Phelan hasn’t chimed in recently about Abbott’s funding veto, but told the Texas Tribune last month that while he “understand[s] the frustration the governor has” that his “election integrity” bill didn’t end up being approved by the Legislature, he expressed concern about “how it impacts staff, especially those who live here in Austin, which is not an inexpensive place to live and raise your family and children.”

The relatively measly $600 a month salary Texas representatives and senators make is actually guaranteed in the Texas Constitution, so lawmakers themselves won’t be missing any checks due to Abbott’s action. To Phelan’s point, it’s the hundreds of staff members who work under the Legislature’s umbrella — from the overworked and underpaid staffers in Lege members’ offices and the large numbers of non-partisan bureaucrats who keep the state Capitol running — who would be hurt most by Abbott’s funding veto.

In another brief opposing Abbott’s veto, the nonpartisan League of Women Voters on Tuesday noted that Abbott’s veto “will prevent the Texas Legislature from performing its constitutional duty to redistrict congressional, legislative, and state board of education seats,” which “will deprive Texas citizens of a timely and fair process for the redrawing of federal congressional and state legislative maps.”

Abbott’s veto would take effect on September 1, and the U.S. Census results lawmakers need to use as the basis for drawing new maps won’t be available until September at the earliest due to pandemic-related delays. That means the legislative branch would need to have been re-funded before any redistricting can occur later this year in yet another special session of the Legislature in addition to the one Abbott’s already called to revive his scuttled “election integrity” bill.

Even though the special session begins this Thursday, Abbott as of Tuesday afternoon had yet to lay out what topics lawmakers will be allowed to pass legislation about, which the governor has full control over. The election bill is seen to be a given as its scuttling was what prompted Abbott to call for legislative overtime in the first place, but it's unclear what else he’ll add to July’s lawmaking menu.

Abbott has the power to allow lawmakers to pass new legislation funding the legislative branch to counteract his veto, but he’s likely planning to hold out adding that to the approved list of agenda items until lawmakers have satisfied him by passing some form of election bill to add new penalties for voting fraud and forbid changes to state voting practices in places like Harris County, adjustments that Texas Democrats argued were pandemic-minded moves to make voting easier during the crisis but Republicans have claimed leave more room for potential voter fraud.

Abbott may do Lt. Gov. Dan Patrick a favor and add to the agenda Patrick’s failed attempt to bar transgender Texan kids from playing on the school sports teams that align with their gender identity as opposed to their biological sexes. Patrick requested that Abbott do so as soon as the measure was killed by Texas Democrats back in May, and it’s the exact type of right-wing culture war issue a governor might want to focus on if he were to be facing multiple primary challengers accusing him of not being conservative enough for Texas.


That’s the argument West made in his July 4th announcement that he’ll be challenging Abbott for his seat in the Governor’s Mansion. West has spent the past year antagonizing Abbott for allegedly abusing his executive powers by ordering too many government interventions like mask mandates and business closures to fight COVID-19. West joins former state Sen. Don Huffines as yet another Republican who thinks Abbott's insufficient conservatism means he should be kicked out of Austin.

West didn’t mention Abbott by name in his rambling campaign kick-off video, but listed protecting oil and gas against renewable energy and further cracking down on the Texas-Mexico border “to ensure that Texas is for Texans” as two of his main goals in challenging Abbott.

Abbott hasn’t responded to any of West’s needling over the past year during the former congressman’s tenure atop the Texas GOP, but he has done his best to shift the conversation toward right-wing priorities like supporting law enforcement and protecting the border, as he did during last week’s border summit and photo-op with former President Donald Trump where the two discussed Abbott’s plan to have Texas restart construction on Trump’s wall.

For all the noise from Democrats over Abbott’s veto overreach and failures in office, so far only Republicans have officially stepped-up and announced their intention to take on Abbott.

After months of coy winks and nods from Texan-bred actor Matthew McConaughey that he might be considering a run for governor, no one knows if he’ll actually follow through and enter the race. Even if he does decide to run, there’s no telling under what — if any — political party’s mantle he’d run under, having described himself as “aggressively centrist” in the past and refusing to go into details about what his policy priorities might be if he were to lead the state.

In the Democrats’ corner, state liberals seem to be holding their breaths over whether or not nearly-successful U.S. Senate candidate and U.S. presidential also-ran Beto O’Rourke will officially challenge Abbott on behalf of the blue team.

O’Rourke has held firm in recent weeks that his only priority right now is to fight back against Abbott and other Republicans’ attempts to make voting more difficult toward the supposed goal of stopping virtually non-existent voter fraud, but didn’t rule out entering the governor’s race in a recent MSNBC interview.

“I’m going to see this fight through to the finish,” O’Rourke told MSNBC’s Medhi Hasan on June 13, “and then after that I’m going to see how I can serve Texas, either as a candidate or supporting candidates.”

So far, O’Rourke is the highest-profile Democrat that’s even publicly considered running against Abbott, but it’s unclear how enthused Texas voters and liberal donors will be about throwing their weight behind a candidate that lost his last two races.

The longer O’Rourke dithers on whether to enter the race, the less time other potential progressives will have to rally the financial support and name recognition needed to take on a juggernaut like Abbott, who despite taking hits from both Dems and Republicans over his pandemic handling for different reasons still has lots of supporters in Texas, and has proven to be no slouch in raising boatloads of money when needed.

Everyone who’s decided to donate cash to Abbott’s border wall project online has had to provide a phone number and email address. Those folks shouldn’t be surprised if Abbott uses that contact info in the future to solicit donations toward his biggest priority of all: staying in power.
KEEP THE HOUSTON PRESS FREE... Since we started the Houston Press, it has been defined as the free, independent voice of Houston, and we'd like to keep it that way. With local media under siege, it's more important than ever for us to rally support behind funding our local journalism. You can help by participating in our "I Support" program, allowing us to keep offering readers access to our incisive coverage of local news, food and culture with no paywalls.
Make a one-time donation today for as little as $1.