Could Today Be the Day That Abbott Signs a Radical Abortion Law Critics Call The Most Extreme In America? [UPDATED] 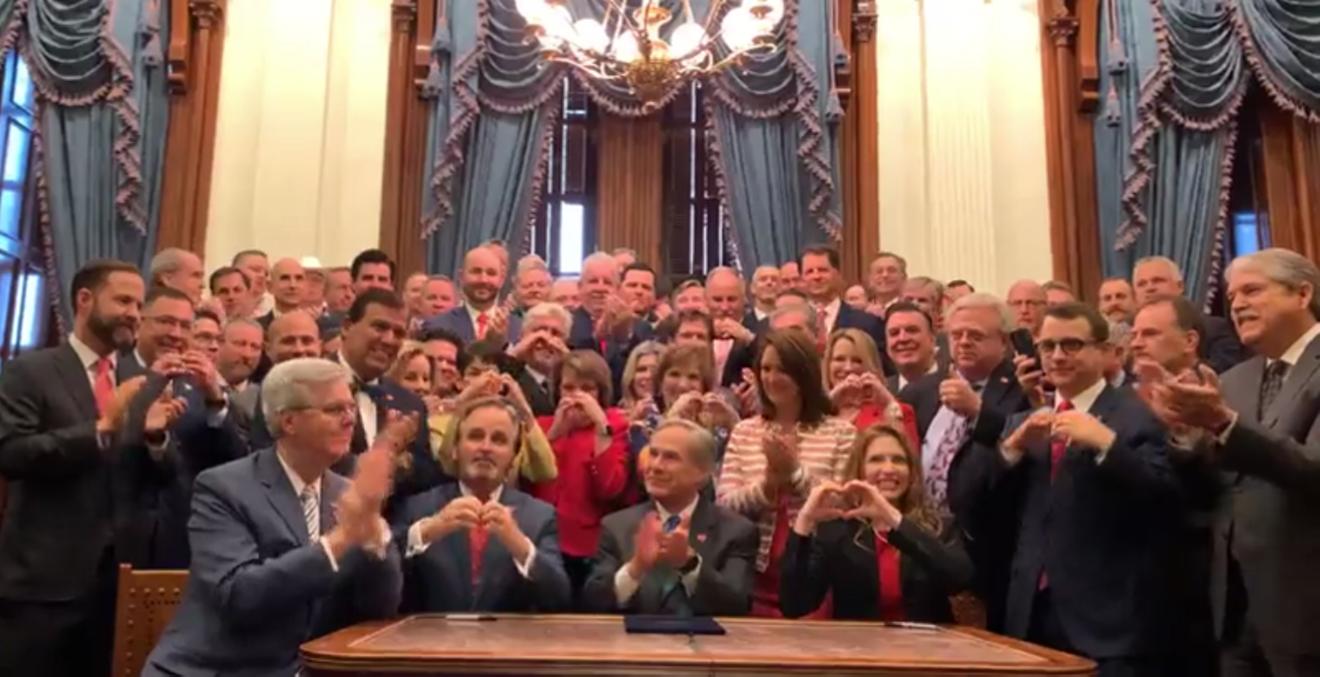 Gov. Greg Abbott is expected to sign into law a controversial bill banning abortions after six weeks on Wednesday morning, representatives from Planned Parenthood and the American Civil Liberties Union of Texas have told the Houston Press.

Senate Bill 8, which critics have called one of the most restrictive abortion bills in the country, received a final vote of approval from the Texas Senate on Thursday, at which point it was sent to Abbott’s desk for his signature.

When SB 8 goes into effect on September 1, 2021 after Abbott signs the measure, it will allow people to sue abortion providers and anyone who helps someone get an abortion after a “heartbeat” is detected in a fetus for up to $10,000 in damages. Even non-Texans and people who have never met the person receiving an abortion could sue under SB 8’s provisions, and individuals performing abortions or helping someone get an abortion could potentially be sued by an unlimited number of people.

Caroline Duble of the Texan abortion rights nonprofit Avow (formerly NARAL Pro-Choice Texas) called SB 8 “the most extreme abortion ban in the country.” Since most pregnant Texans “don’t even know that they are pregnant at six weeks,” Duble said, she and other pro-choice advocates contend that SB 8 “is essentially a total ban on abortion.”

“The court system is now going to be used to just harass people who support abortion access,” Duble said, “because whether you are in violation of the law or not, someone can accuse you and force you to deplete your resources defending yourself in court.”

SB 8’s language targeting anyone that “aids or abets the performance or inducement of an abortion” of a fetus after six weeks seems in part focused on organizations like Houston’s own Clinic Access Support Network, an abortion fund nonprofit that helps people seeking abortions get rides to their procedures and provides them with financial support.

“It definitely puts the burden of contesting every single case on providers or abortion funds in a way that is massively inconvenient, to say the least,” Schilling said.

Texas’ so-called “heartbeat bill” — a term used by anti-abortion advocates who claim a fetus has a detectable heartbeat after six weeks of gestation, although medical experts say that “heartbeat” is just electrical flickering from clumps of fetal cells — is unique even compared to laws from other states which have attempted to ban abortions at the same point in pregnancies.

That’s due to how SB 8 punts enforcement to private residents suing in civil courts as opposed to past abortion restrictions, which have been enforced by executive branch agencies like the Texas Attorney General’s Office or the Texas Health and Human Services Commission.

“The enforcement mechanism is new, which means that the legal strategy will have to be new. It’s definitely uncharted territory,” Duble said.

“The enforcement mechanism is new, which means that the legal strategy will have to be new. It’s definitely uncharted territory.” — Caroline Duble, pro choice activist. .

Drucilla Tigner — the Reproductive Rights Political Strategist for ACLU of Texas — agreed that SB 8 will be tricky to challenge in the courts.

“The vast majority of bills are enforced by the executive branch, so when you’re challenging a law in court, usually what happens is you file a lawsuit against either the [Texas Attorney General] or the [Health and Human Services Commission Chair], or whoever’s in charge of enforcing the law,” Tigner said, due to how the state of Texas itself has “sovereign immunity” against state lawsuits.

That legal framework has been used by abortion advocates in other states where “heartbeat bills” have been passed to block those laws from being implemented. But since the state government doesn’t even have a role in enforcing SB 8, that strategy won’t fly here.

“Because the state is not enforcing the law” given how SB 8 is only “enforced” by private citizens filing lawsuits, “it makes it really difficult to know who to sue to get appropriate relief,” Tigner explained.

“That’s really where the legal uncertainty comes in,” she said.

ACLU of Texas hasn’t decided whether it will challenge SB 8 in court or how it would hypothetically do so, but Tigner did say that the bill’s constitutionality could be contested once someone is actually sued for performing an abortion after a so-called heartbeat is detected, or for helping someone get such an abortion.

But for that kind of challenge to even be possible, “somebody is going to have to be willing to open themselves up to almost unlimited liability to prove that this is an unconstitutional law,” Tigner said, “which is a large burden on providers and people who support people who need abortions.”

Schilling said the Clinic Access Support Network is still figuring out exactly how to navigate a post-SB 8 legal landscape while still helping their clients get the abortion care they need.

“We are accountable to the people we serve, and we can’t serve people if we get shut down because we’re breaking the law,” she said.

“So we are restricted to finding creative solutions to get people their abortions in ways that are legal,” Schilling continued, “regardless of our views of whether these laws are rooted in science, or are just another means of oppression.

“But the people writing these bills do so without consideration of the people they’re affecting.”
KEEP THE HOUSTON PRESS FREE... Since we started the Houston Press, it has been defined as the free, independent voice of Houston, and we'd like to keep it that way. With local media under siege, it's more important than ever for us to rally support behind funding our local journalism. You can help by participating in our "I Support" program, allowing us to keep offering readers access to our incisive coverage of local news, food and culture with no paywalls.
Make a one-time donation today for as little as $1.